This coming Sunday will mark the 40th running of the Japan Cup, the top-level event that was begun with the objective of raising the level of Japan’s racing through competition with some of the world’s best. An invitational event, the Japan Cup carries the country’s top prize money and has long been one of the most prestigious races in the world.

The trio will meet for the first time ever, alongside 13 others, pit age and youth, experience and fervor against each other, all amid the usual heady mix of skill and luck that is racing.

Way To Paris, the English-bred, France-based, Andrea Marcialis-trained 7-year-old who scooped this year’s Group 1 Grand Prix de Saint-Cloud, will be the lone foreign challenger in this year’s Japan Cup.

France has not won the Japan Cup since Le Glorieux in 1987, back when Japan had yet to establish its stronghold on the Japan Cup winner’s circle. And, although the number of competitors flying in to take on the home team has decreased in recent years, a horse trained outside of Japan has not won since the U.K.-trained Alkaased in 2005.

The Japan Cup will be the 12th race, the last race, on the Sunday card at Tokyo Racecourse. Post time is 15:40 local time.

The expected top picks are as follows.

Almond Eye - With her retirement already announced, the Japan Cup will be Almond Eye’s last run. In 2018, the daughter of Lord Kanaloa had gone from being crowned winner of the filly triple crown with her win of the Oct. 14 Shuka Sho to a record win of the Japan Cup on Nov. 25. This year, after a win of the Victoria Mile and a second in the Yasuda Kinen, Almond Eye once again captured the Tenno Sho (Autumn) on Nov. 1 and will take on the Japan Cup with a much tighter schedule than she had two years ago. Trainer Sakae Kunieda had her return from the farm to Miho Training Center on Nov. 18. “(Jockey) Christophe Lemaire rode her on Nov. 20 and she was relaxed, lean, and looking good,” Kunieda said. Almond Eye has only missed the Top 3 once in her 14-race career (ninth in the 2019 Arima Kinen (The Grand Prix)) and she is 4-for-4 over 2,000 meters or up at Tokyo. The record holder for most Grade 1 races won at home and abroad by a Japanese-based horse, Almond Eye is still tied for most Grade 1s won in Japan. A win Sunday would mean one more record to her name. The JPY300 million Japan Cup winner’s prize would also put her at the top of the JRA list for most money earned at home and abroad.

Contrail - Unbeaten and this year’s Triple Crown champion, Contrail returns from his Oct. 25 Kikuka Sho (Japanese St. Leger) run, where he repeated his sire’s feat of capping the 3-year-old classics with an unblemished record. Seven for seven, victory for the son of Deep Impact did not come easy in the Kikuka Sho, as the 3,000-meter race was won by a mere neck. Like Contrail, Triple Crown winner Symboli Rudolf had gone unbeaten to the Japan Cup gate following his Kikuka Sho run, but finished in third place. The 1984 Japan Cup, however, followed the Kikuka Sho by a mere 14 days. Contrail has a more forgiving schedule. It will, however, be the first time the colt goes up against horses older than him. Veteran jockey Yuichi Fukunaga has ridden all but one of Contrail’s starts and is expected to be in the saddle. Both he and trainer Yoshito Yahagi are gunning for their first Japan Cup win. 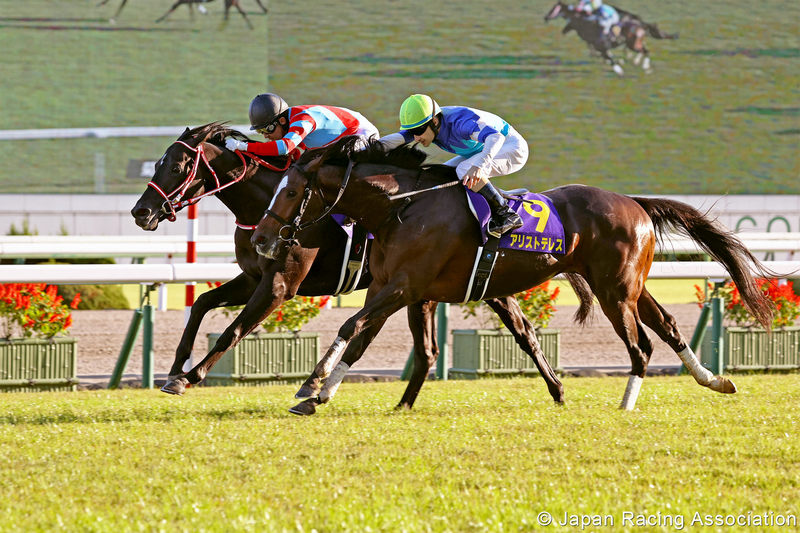 Daring Tact - This year’s other unbeaten super star is Daring Tact, who clinched the filly’s triple crown with her win of the Shuka Sho on Oct. 18. The daughter of Epiphaneia, who won the 2014 Japan Cup, Daring Tact has, like Contrail, only raced against her peers. She will race under only 53kg, 2kg less than both Contrail and Almond Eye. Trainer Haruki Sugiyama also thinks there’ll be other advantages for his champion filly this time out. “She got pretty worked up last time,” Sugiyama said of Daring Tact’s Shuka Sho run. “But I think she’ll have let off some steam. The lineup is different, but she won’t be targeted like she was in the Shuka Sho and she should be able to relax and run her own race.”

Glory Vase - Glory Vase, a 5-year-old by Deep Impact aced the Hong Kong Vase last year for his first top-level win. Second in the Tenno Sho (Spring) earlier that year, he had returned after six months for a sixth-place finish in the Grade 2 Kyoto Daishoten before heading to Hong Kong. This year, a heavier track was likely his undoing in the Takarazuka Kinen, but the Kyoto Daishoten was his. He beat Kiseki by 3/4 length in the Oct. 11 event after a four-month layoff and further improvement is expected. He has five wins and three seconds from 12 starts and three of his wins have come at 2,400 meters. This will be his first time at Tokyo but a second at Chukyo and a first at Niigata indicate he can handle a lefthanded track successfully.

Curren Bouquetd’or - Here is a filly who has come achingly close to nabbing her first Grade 1 three times. Runnerup 3/4 lengths behind Suave Richard in last year’s Japan Cup, Curren Bouquetd’or, now 4 years old, followed that second up with two more, both over 2,200 meters in Grade 2 company this year - the Kyoto Kinen and the Sankei Sho All Comers at Nakayama, which saw her only a nose off the win. Curren Bouquetd’or, a stablemate of Almond Eye, was one of many who were already in Dubai early this year when they had to return unraced due to COVID-19, but this means she is rested and prepped. In addition to the Japan Cup, her other top-level bids were in the Yushun Himba (Japanese Oaks) and the Shuka Sho. She’ll run under 55kg, 2kg more than last year but still the same weight as she carried in the Shuka Sho.