Among the army of brave and talented staff working tirelessly to keep Britain and Ireland moving are the thousands of key workers employed in racing and bloodstock.

Things are unusually calm out Closutton way. Willie Mullins would usually be putting the finishing touches to his Punchestown team, or figuring out how many to run in the Irish Grand National, but not this year.

The jumps season has ended prematurely due to the Covid-19 crisis and Closutton is basking in serenity. The routine remains the same, but there are no buttons being pressed.

Hack canters have replaced crucial pieces of work. As Jason Dear, the groom of the late Wicklow Brave as well as current stars like Elixir D'Ainay, puts it: "It's weird having nothing to look forward to.

"This time of year is usually very exciting. Punchestown is a big deal around here. It's only down the road and we would always be getting horses ready for that around this time.

"It's a shame it won't be happening this year, and you don't even know when the Flat is going to start up, but you can't be selfish and have to look at the bigger picture and realise what's happening around the world. It's much quieter in Willie's at the moment.

"In saying that, everything is ticking over. All the horses are still exercising away. I rode out Blackbow, General Counsel and Royal Rendezvous this morning. We're not pressing any buttons or anything like that, just stretching their legs. Some of the younger horses might be getting a bit of an education but that would be it.

"I'm still in at 6.30am every morning. We're trying to keep things as normal as we can. The horses have no idea what's going on in the world, so their routines need to stay the same. I love this time of the year normally, as between Fairyhouse, Punchestown, the Flat and some horses heading over to France it is all go. It's strange." 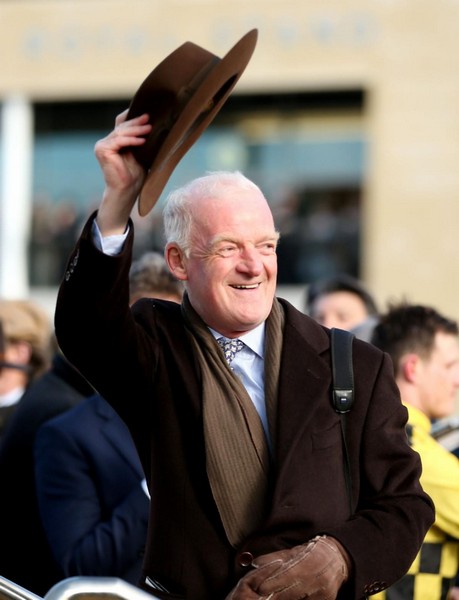 It is also strange in Gordon Elliott's Cullentra House stables. Katie Young, whose enthusiasm is refreshing in such bizarre times, has turned her hand to painting and decorating.

Young says: "We're finally getting the chance to do some jobs that we haven't had a chance to do all year. The main thing we've been doing is tidying up the whole yard.

"There are about 40 empty stables at the moment, so we have been digging them out, power-washing them, painting them and giving them a bit of a face-lift, which was badly needed. I hadn't mucked out a stable in about six years, so it has been a bit of a shock to the system, but I realise how lucky I am just having a job at all.

"There are about 250 stables here, so we are hoping to give all the stables a bit of work. There's plenty of work in that.

"There are still about 40 horses we are riding out, the ones who have come back in for the summer. There are another 50 or 60 who have been given two weeks off, but they will be back riding out soon in preparation for summer campaigns.

"Everybody is remaining optimistic. We're all starting to realise that we're lucky to have a job. It's just very hard to know what to do with the horses. I know racing could start up again on May 1 but, realistically, it probably isn't, so what do you do with the horses?

"It was great for us that Cheltenham went so well. I know this is going to sound selfish, but it would have been disastrous for us if it was cancelled. Everybody was looking forward to it so much as we knew we had so many good chances. It was a great week for everyone and it's keeping everyone's spirits up at the moment."

Tom Harney is an amateur based with Ross O'Sullivan and, similarly to Young, he is focusing on the positives of what is an unusually quiet spell for the stable.

He explained: "It's quite strange alright but we're keeping ourselves busy. Luckily for us, Ross has a good dual-purpose string and made a decision to invest in some Flat horses a while back so there is light at the end of the tunnel.

"There are five or six winter horses gone out to the field and we're down to four full-time members of staff but there's no shortage of things to do. The sooner racing comes back the better but, like I said, we're not too bad off because we have a Flat string to look forward to."