Trainer James Peters was pleased Irish import Frey made a successful start to his local career at Kranji on Saturday even if there is still work to be done.

Lined up in the $20,000 Open Maiden race over 1000m, Frey (Juan Paul van der Merwe) used his good gate speed to come across from his wide barrier and settle outside leader King Midas (Joseph See) for most of the 1000m trip before gaining the ascendancy shortly after cornering.

Favourite Mowgli (Louis-Philippe Beuzelin) and Qiji Flyer (Yusoff Fadzli) shaped up as major threats on the outside, but Frey’s ($80) experience on Polytrack did its bit. Under van der Merwe’s urgings, he found plenty to go and score by one length from Qiji Flyer with Mowgli in third place another short head away, clocking the distance in one minute flat. 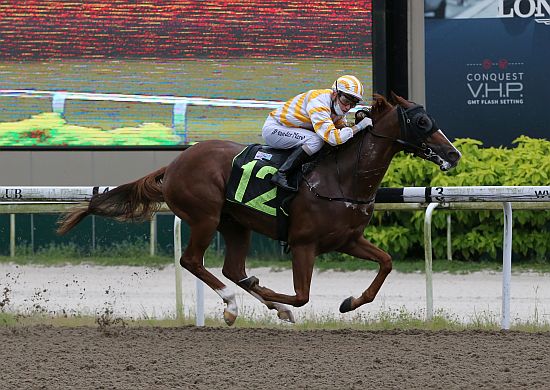 While Kranji is new territory to the French-bred three-year-old by Olympic Glory, Polytrack is not totally alien as the chestnut’s only start (when known as Holy Olympic) in Ireland was on a similar surface at Dundalk when he ran third.

But to Peters, Frey owed his debut victory to his raw ability and further headway should come along with more racing experience.

“We knew he had speed from his trackwork, and today, from the wide gate, you either go forward or go back. We decided to use his natural speed to go forward instead.

“We’ll see what handicap he gets next. There is more to come from him as he’ll come on from today’s first run.”

Frey is a case of beginner’s luck for the Princeton Stable, a relatively new outfit made up of local owners, who were launching their first runner at Kranji. They have two other horses with Michael Clements, Tigarous and Balor, who haven’t raced yet.

“It’s great to get a winner for this new group of owners and I thank them for their support. I’d also like to thank all the other owners during those three hard months,” said Peters.

“It’s been hard for everyone, and I also thank my staff for all their hard work during that break.”

While van der Merwe has combined with Peters on a few occasions, Frey was sealing their first success together.

“JP helps me out at trackwork and he’s a good lightweight jockey. I’m glad he’s won a first race for me,” said Peters.

The South African jockey is at his second season in Singapore and was bringing up his seventh winner for the season to take his total tally to 21.