Inferno back to winning ways first-up

Inferno, the horse widely dubbed as the next big thing at Kranji, showed that tag was not usurped after he recorded a soft win at his racing comeback on Saturday.

Last year’s Singapore champion two-year-old was kept out of trouble in a four-wide berth by first-time partner Vlad Duric in the $70,000 Class 3 Division 2 race over 1200m, before going on to assert his superiority the moment he was given his head in the home straight.

Legend Of The Sun (Benny Woodworth) did what he could to mount some form of resistance when the $6 hotpot ranged upsides at the 300m, but after an early gut-busting run to claim the lead from his wide gate, his task became mission impossible. 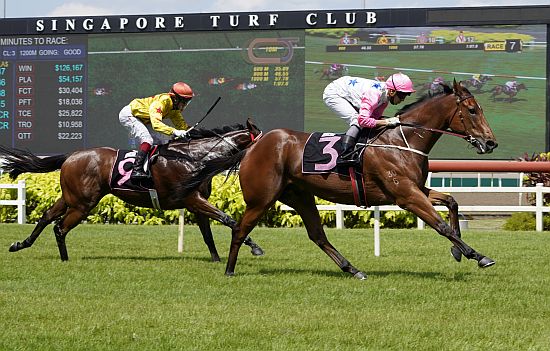 As they sailed past Legend Of The Sun, Duric just had to point Barree Stable’s exciting prospect in the right direction given his slight tendency to lug inwards inside the last furlong.

The Holy Roman Emperor four-year-old strolled in by 1 ¼ lengths from Legend Of The Sun with Golden Flame (Juan Paul van der Merwe) third another length away. The winning time was 1min 9.66secs for the 1200m on the Short Course.

Inferno won the first five races from his previous six starts, including the Group 2 Aushorse Golden Horseshoe (1200m) and Group 3 Saas Fee Stakes (1200m) with Michael Rodd as his exclusive partner right through. The only blemish came at his sixth outing when he found one better in Siam Warrior in a Class 3 race over 1200m on February 29, but it would seem the triumphant run is back on the march after that mere blip.

With that latest success, Inferno has now amassed close to $350,000 in prizemoney for the Barree Stable. The impressive win has also brought up a hat-trick of wins for Duric who, on 39 winners, has suddenly shot clear at the top of the log, having now almost twice the haul of the next best Ruan Maia on 20 winners.

Inferno’s trainer Cliff Brown, who has always been careful in shielding his ward from those inevitable comparisons with his previous champion Debt Collector (also raced by Barree), couldn’t be happier with the first-up win.

“He was very impressive. He did it very easily,” said the Australian handler who was at a training double after newcomer Trading Post saluted earlier (see previous report).

“He also ran very good time. He will now head towards the Singapore Classic and eventually the Singapore Guineas, that’s the plan for him.”

The Singapore Three-Year-Old Classic (1400m) has had the ‘3YO’ annotation dropped to the more generic Group 2 Singapore Classic (1400m) given its rescheduling this year to August 30 due to the COVID-19 pandemic.

The first Leg, the Group 3 Singapore Three-Year-Old Sprint (1200m) was cancelled outright while the Group 1 Singapore Guineas (1600m) is maintained as the third and final Leg on September 26.

Brown was hoping to treble the score with another well-fancied runner ridden by Duric in the race after Inferno, Where She’s Happy in the $30,000 Class 5 Division 2 race over 1400m, but the Blackfriars mare could only finish fifth to $20 shot Awesome Conqueror (Marc Lerner).

Brown was, however, not disappointed with the run where she could be seen shuffled back to the rear after some crowding, and running into dead ends in the home straight.

“She was knocked over three times, and the race was over for her. She actually ran well,” he said.