Queensland wonder horse Incentivise (by Shamus Award) has been widely considered a $5 million, Group 1, Carlton Draught Caulfield Cup (2400m) ‘shoo-in’ since his remarkable emergence during the 2021 Winter Carnival and today came, saw and conquered in the time honoured contest in no uncertain terms.

Looking to extend his amazing sequence of wins to nine in one of Australian racing’s toughest assignments, Incentivise just didn’t deliver in full, the 5-year-old left the nation’s racing fans with a memory they will long savour with a dominant performance which saw him jump from the extreme outside barrier and cover ground every step of the way, yet still manage to storm away from his opposition down the length of the Caulfield straight. 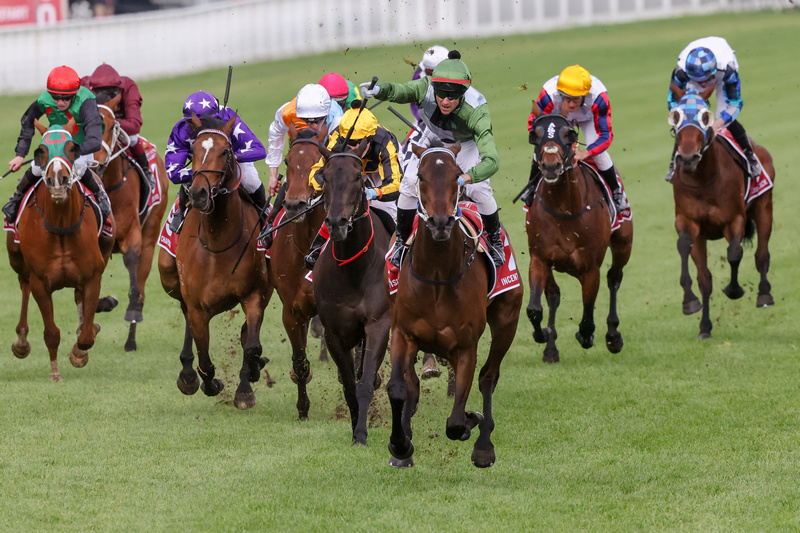 Sent off the $2.30 favourite, Incentivise proved head and shoulders above his rivals in a performance for the ages. While Nonconformist (by Rebel Raider) valiantly chased him home to claim second ahead Persan (by Pierro) in third, the story of the 2021 renewal of the Caulfield Cup is all about the winner and his part in catapulting trainer Peter Moody and jockey Brett Prebble back into the upper echelons of Victorian racing.

Each absent from domestic racing for much of the past decade for entirely different reasons, Moody and Prebble only recently returned to the local scene after their respective sojourn and were teamed together for Incentivise’s Cups campaign by a twist of fate. Both have since performed their respect task masterfully and today reaped the reward of their revered professionalism.

Forever to be known as the trainer of Black Caviar, Moody landed his first spring major with Incentivise’s Caulfield Cup win and was greatly appreciative for the opportunity of achieving the feat after his historic success.

“It’s unbelievable.,” Moody declared in his post-race interview. “Caulfield was my home for sixteen or seventeen years and I trained a couple of thousand winners here. Never this one. Very important to win it.

“Very grateful for the opportunity thanks to [managing owners] Brae Sokolski and Ozzie Kehir. They planted the seed, purchased the horse and recommended that he came to my yard.

“A big thanks to Steve Tregea — the former trainer, the owner and breeder of this horse. Big shout out to everyone in Toowoomba and the Darling Downs. This one is for you.”

In terms of the performance itself, Moody said: “We weren’t going to rush him. Brett [Prebble] took his time. He found a lovely spot and he knew where he wanted to be down the side. He said that he wanted to be six or seven off and build into the race.

“He said ‘I don’t care how the first 1200 goes, I just want to be able to build into it at the halfways mark onwards.

“He [Incentivise] gives you a little heart flutter. He hits a flat spot coming down the side but he just kept building. A super effort.”

Asked about the response of his family when he told them that he was returing to the training ranks, Moody replied: “They’ve been unbelievably supportive. It means as much to them as me. Very special.

“Catherine Coleman, she rides him, does all the work, she’s my 2IC and will be a training partner one day, along with Jeff O’Connor, my Racing Manager. [Strapper] Will Holmes, with the horse, he loves him to death and the big team at home. It is a group effort.” 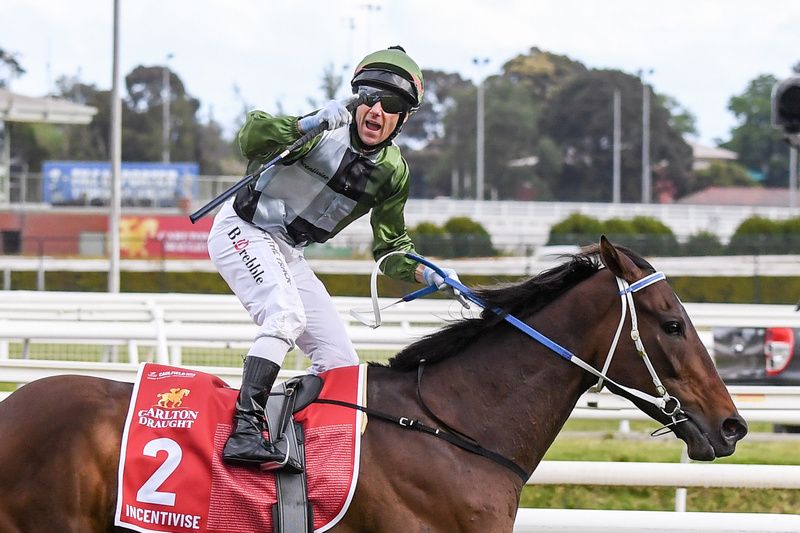 Prebble was equally overjoyed with the result but tried his best to put it into context.

“It was pretty exciting,” Prebble admitted. “It was an awkward draw. There are 17 other jockeys and they’ve all got their own opinion on how the race is going to be run. I was mindful of the fact they weren’t going to give him a soft lead.

“The way the race was run today, there was a fair bit of wind out there, it was a little bit windy. I thought ‘I’m definitely going to get cover, even if it is on the side there for the first 1200m’. He doesn’t over-race, he doesn’t waste his energy like some of the others do. Damien’s [Delphi] was a bit aggressive.”

“I was surprised; he came off the bridle a bit sooner than I would have liked. I showed him the whip before the home turn. All that is telling me is look out Melbourne Cup. He is going to eat up the 3200m.

“He is exciting. He is probably one of the most exciting horses I’ve ridden.”

Prebble revealed that it was not all plain sailing, however.

“I said, ‘come on big boy’. His big action on him, I thought, he’s not handling this ground as well as I would have liked and Linda’s horse [Persan] was hanging around a bit longer than I would have liked. [But] Once he straightened, he gets into another gear. He doesn’t feel like he sprints. He builds off that high cruising speed.

“He’s unassuming and I don’t know what he’s won by, but I know one thing… I didn’t see a horse's head behind me and I couldn’t pull him up. Pete’s got him in ripping form and he’s a serious stayer.”

Incentivise was returned as the $2.30 favourite, the runner-up Nonconformist at $9.00, and the minor placegetter Persan at $31.00.

Jordan Childs - Homesman: “He ran really well enough. Just got pulling a little bit when one came three-wide. Might have paid in the finish.”

John Allen - Explosive Jack: “Disappointing. Didn’t think he enjoyed the hustle and bustle earlier and probably the Caulfield track mightn’t have been ideal for him.”

Damian Lane - The Chosen One: “Just didn’t have the right run. He pulled in his race and it cost him finishing off.”

Damien Oliver - Delphi: “I had a nice run in front. Just felt that I had a comfortable tempo, but he just didn’t take me into the race down the side like last time. Persan was jogging outside me and I didn’t have an answer a fair way out. He just didn’t back up his run from last weekend unfortunately.”

Dean Holland - Master Of Wine: “Just started a tad slow and was a bit further back but nothing would have been near the winner anyway, I don’t think.”

Harry Coffey - Port Guillaume: “He got a long way back, but was good through the line. The final 400 metres was his best.”

Craig Newitt - She’s Ideel: “She went really good. She just got outsprinted when they took off down the side but the last 100 metres she was really strong. I would say the two miles will suit her.”

Craig Williams - Nonconformist: “Amazing performance into second. Very well trained, extremely well handicapped. The trainer has done a great job. He didn’t have an economical run for the first half but we trusted him and the winner is a star.”

Michael Dee - Duais: “We were much closer in the run than anticipated but was a bit disappointing in the end.”

Great House - Teo Nugent: “Super effort. Very grateful we gained a start today and he ate every part of that 2400 up and I can’t wait to see him over further.”