I Am Superman starting to live up to his name

Irish-owned I Am Superman (by Footstepsinthesand) continued on his upward spiral with a flawless winning performance in the $200,000, Group 2, Iron Jack Shannon Stakes (1500m) at Rosehill Gardens in Sydney.

First seen in Australia when invited to take part in the inaugural $7.5 million Golden Eagle last October, the entire son of Footstepsinthesand was subsequently left with Peter & Paul Snowden to develop his credentials for a future stud career.

After a small handful of below par performances at the beginning of the year when the quality sprinter-miler was still essentially going through the process of acclimatisation, I Am Superman has now returned to his best winning form with two unbeaten efforts since commencing his spring campaign.

An easing favourite in betting for the Shannon Stakes, I Am Superman was given a perfect ride by Kerrin McEvoy, immediately being put on the tail of the expected race leader Quackerjack before proceeding to salute the judge with a significant degree of authority.

In what amounted to a one horse race in the straight, Riodini (NZ) (by Proisir) and Looks Like Elvis (by All American) made late headway over the final stages to finish second and third respectively.

I Am Superman was 2nd emergency for last weekend’s Sir Rupert Clarke Stakes in Melbourne and had to be switched to Sydney when missing out on a run. Stable spokesman Paul Snowden revealed that they thought they had a live chance of landing the Group 1 but were forced to revise their plans.

“We were devastated when we didn’t get a run in the Rupert Clarke last weekend,” divulged Snowden Jnr.

“We thought he would be very effective. They are the races we wanted to be targeting, those Group 1 handicaps.”

“We really wanted to win today to make sure we got into the Toorak,” Snowden continued.

“The Epsom [Handicap] is a little bit too strong on paper for him I feel. He’s exempt from ballot so we’ll give him every chance, but I do believe the Toorak [Handicap] in a couple of weeks will see him hard to beat. He’s still a bull, so it is important to get that Group 1 on his resume.

“Once he gets up to that mile, he is starting to relax well in his races. He was a little headstrong this time last year for the Golden Eagle, but he's started to acclimatise and relax in his races. The last start in Melbourne was a really solid victory. Today was a nice effort.” 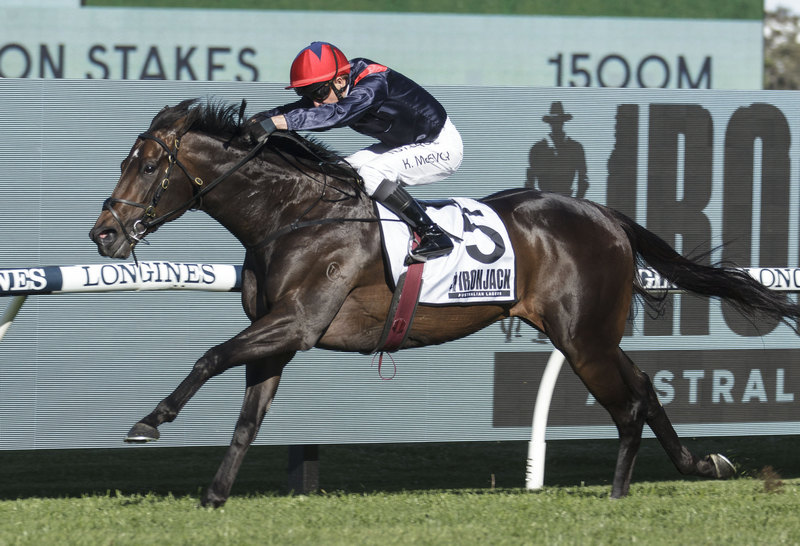 I Am Superman (IRE) and Kerrin McEvoy, picture Sportpix.com.au

After a typically flawless ride by McEvoy, the winning hoop was quick to recognise the work of the Snowdens.

“Peter and Paul have had him for a bit longer now and he’s turned into an 'Australian horse',” observed the consummate professional.

“I must say he’s developed into a lovely big horse. He’s strengthened up.

“He’s a much better unit now than what he was when he got here, so he’s acclimatised well. Fair play to him.”

In terms of the horse’s performance itself, McEvoy remarked: “I would’ve liked to have settled into a one-one spot, but that didn’t eventuate. He toughed it out well because we took up the running when Quackerjack dropped off.

“Two wins from two starts this prep, it’s onwards and upwards for this fella. There’s no reason why he can’t perform [at a mile]. Paul said he might be going to a Toorak — that would be a lovely race for him.”

McEvoy concluded: “He showed he can get around Caulfield, so if he draws well there and has a nice weight on his back, he could be a force to be reckoned with, that’s for sure.”

Raced by Michael O’Callaghan Racing Limited, Mr J Fleming & Mr M O’Callaghan, I Am Superman has now won five of his 16 starts for $295,539 in earnings.

Expected to head to Toorak Handicap at his next start, tab.com.au cut I Am Superman’s ante-post quote from $15.00 to $9.00 for the Group 1 Caulfield feature.

Jim Byrne (Tyzone): “Very disappointing. Didn’t finish his race off at all.”

Regan Bayliss (Niccanova): “Very happy with him. Really good run. Much improved on his last start. On the right direction again.”

Josh Parr (Quackerjack): “He has let us down this preparation. He hasn’t come back the horse he has shown in the past.”

Jason Collett (Looks Like Elvis): “Jumped well and we looked to get cover to switch him off. He didn’t want to come back under me. It just told late.”

Brenton Avdulla (Crack On Crack On): “He ran OK. Just looking for a mile and a quarter.”

Rachel King (Riodini): “Really good run. He gotten his confidence back up again.”

Thomas Stockdale (So You Win): “I was really happy with that. Very good first up run going forward. Seems to go better this way.”

Kathy O’Hara (Nudge): “She is flying this prep. Really knocking on the door. If she can find the right race she will be winning.”

Robbie Dolan (Yamazaki): “She just back. Her usual race pattern. She made up ground but it was too late. Probably needed to be on speed today.”