I Am Sacred from behind this time

After I Am Sacred ran a shocker at his second run, trainer Mark Walker went back to the drawing board, chopped and changed a few things, and a new winning formula has been whipped up.

The I Am Invincible four-year-old was right on target at his first start on August 2 when he led all the way for Juan Paul van der Merwe.

Two weeks later, he was presented in another 1200m event but at Novice level, with the booking of three-kilo claimer Mohammad Nizar to alleviate the 58kgs impost. The same frontrunning blueprint was followed, but I Am Sacred emptied out at the 300m to run seventh. 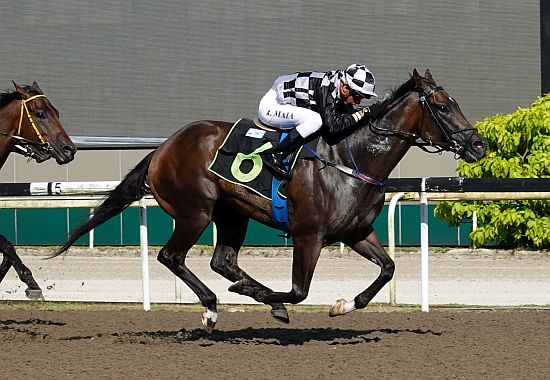 A freshen-up ensued, coupled with a tactical switch sprinkled with a tweaking of gear, and Walker again showed why he was crowned champion three times.

Once the field straightened up, I Am Scared steadily worked his way to the top three wide before drawing clear to a 1 ¼-length victory from The Brotherhood (Benny Woodworth). Sky Eye did well to hold third place down another half-length away considering the wide trip without cover he endured.

Punted down to even-money favouritism, I Am Sacred recorded 1min 3.95secs for the 1100m on Polytrack, and has already picked up around $70,000 in stakes earnings from his two wins for the Remarkable Stable.

Walker pulled no punches when explaining the blemish between I Am Sacred’s two wins.

“At his last start, he got an ordinary ride. He went too hard in front,” said the Kiwi handler.

“I gave him a freshen-up and brought him back to 1100m. Today, he relaxed nicely with the tongue tie on for the first time.

“It was all speed on paper in this race, and we wanted to teach him to settle behind runners. Ruan has very good hands and settled him beautifully.”

The Walker-Maia duo did not settle for the double (they won earlier with Brutus – see earlier report) as they immediately returned to the winner’s circle in the very next race, the $30,000 Class 5 Division 2 race over 1800m, with 5-1 shot Hidden Promise.

The Brazilian jockey’s treble has brought his score up to eight winners in the last two weekends (and 40 overall) during which log leader Vlad Duric was suspended, halving the massive lead (16 winners) the latter held on him after his last meeting on September 5.

Duric, who sits on top on 48 winners, returns at the Singapore Guineas meeting on Saturday.