Rachael Blackmore has relived the moment she believed her historic Grand National victory was within her grasp as she said she was able to hear the race commentary with no crowd in the stands at Aintree.

The jockey, who travelled home to Ireland on Sunday, was unsurprisingly still on cloud nine when speaking on RTE Radio 1's Morning Ireland programme on Monday, and described the feeling of winning jump racing's greatest prize as "absolute elation".

She said: "I heard the commentator say I was four lengths in front as we came back on to the racecourse properly. I knew Minella Times would gallop to the line and you start believing it then. It's absolute elation, it really is. It's just so massive, such a special race.

"It's great just to be part of it. I was tenth with Valseur Lido in 2019 and got a kick out of it – no other race gives you that feeling even without winning. To actually go and win it is indescribable.

"I don't think it's all sunk in yet and it probably won't for a while. It's just incredible. Every child with a pony growing up thinks about the Grand National, it's the first race that captured my imagination. It's incredible and I don't know if I have the words to describe it."

The 31-year-old was asked if she would have heard the commentary if the famous meeting had not been held behind closed doors, and added: "Definitely not. That was the one very small, slight advantage in the unfortunate circumstances of having no crowds."

Blackmore, who was the leading rider at the Cheltenham Festival, recorded her breakthrough success aboard Minella Times, who provided her with her first win for JP McManus in December 2019. 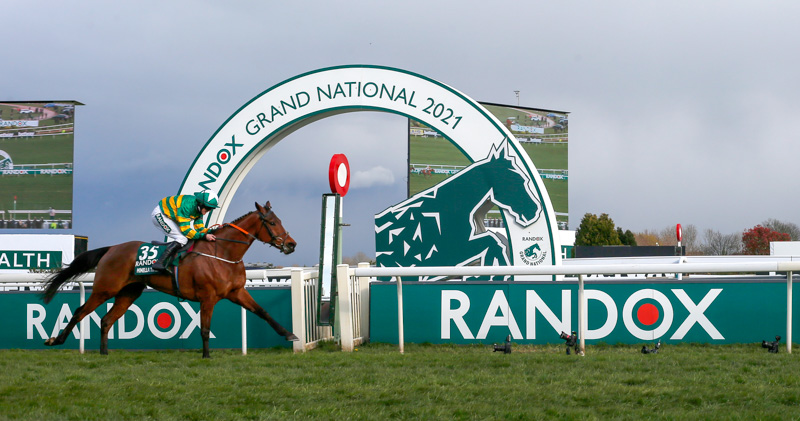 The jockey said: "My first feeling when winning at Cheltenham is more of relief because there's more pressure attached. Going into the Grand National, you don't feel the same pressure and people don't have the same expectation because there's 40 horses, more than four miles to run and anything can happen.

A small break in June will give Blackmore a chance to reflect on the magnitude of her achievements but more immediately, she returns to the saddle for six rides at Fairyhouse on Tuesday. She trails Paul Townend by ten winners in her bid to be crowned champion jockey.

Townend has been out of action since falling at Fairyhouse on April 4 and it remains unclear when he will return.

However, when interviewed on BBC Radio 4's World at One programme, Blackmore said she is taking each day as it comes rather than solely focusing on winning a first jockeys' title to cap off her landmark season.

"I never did set myself massive targets and I'm not going to start now, you try and get the best out of the horses you're riding on the day," she said. "Of course, I'd love to win a Gold Cup or jockeys' title but it's not something I sit down and target at the start of the year.

"The one thing that you learn very quickly is that you're going to lose a lot more than you win. You're going to take the falls and disappointments, but you're living for the days that it does work out like Saturday. Racing never lets you get too carried away."

"It's absolutely incredible for Rachael, Henry [de Bromhead] and everyone," he said. "Rachael is a superstar. We've known her and her parents since the lads were riding ponies. She's just a little bit older than Joseph but she's always been a star.

"She's an unbelievable rider. You can see her parents in her. She's come from point-to-pointing and has made it there herself."

He added: "The way she bounced back from falls at Cheltenham on the same day she rode winners was incredible. She's tactically brilliant and an unbelievable horsewoman – she has it all.

"She's hungry, intelligent and rides an uncomplicated, perfect race for a horse. She rides the horse rather than the race all the time and does it day-in day-out. It's not simple, but she makes it look simple."