Hot King Prawn is back for a Jockey Club Sprint repeat

This time last year Hot King Prawn staved off Mr Stunning and Beat The Clock in the G2 Jockey Club Sprint (1200m) and skyrocketed to the top of Hong Kong’s exciting sprint ranks.

But the ascent stalled when the eye-catching grey failed to fire as 2.1 favourite in the 2018 G1 LONGINES Hong Kong Sprint (1200m). A serious sickness in February 2019 means he heads to the races this weekend for the first time since.

“He had a long time off because of his colic operation, but he hasn’t shown me that he is any different from before - he seems the same, he does everything similarly to when he was last racing,” trainer John Size said.

The Denman gelding returns to defend his crown in Sunday’s (17 November) speed feature as one of five chances for Size, along with champion sprinter Beat The Clock (128lb), D B Pin (123lb), Ivictory (123lb) and Full Of Beauty (123lb).

“His trials have been sound, so we’ll probably find out on race day, when the pressure comes on, whether he can handle it or not but he hasn't shown us anything untoward,” the 11-time champion trainer said. 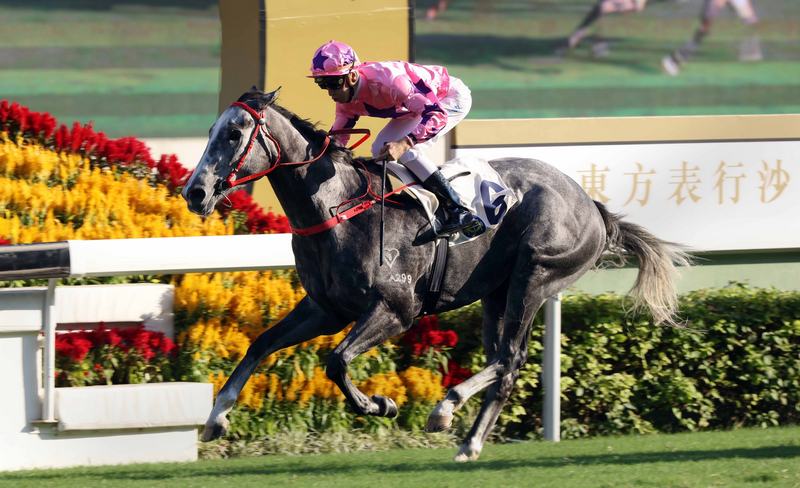 Size’s lightly-raced gelding has won an impressive nine races from 11 attempts, including twice at G2 level and once at G3. His return from colic however has not gone uninterrupted.

“He had a temperature, so I had to stop him for a while otherwise he would have been ready earlier,” Size said.

Sunday’s G2 will see the trainer link up with jockey Grant van Niekerk for the first time this season. The 28-year-old has been as pleased with the Denman gelding’s progression as Size.

“It really is a strong field but he’s a really good sprinter and he’s done everything right. He had that setback last season but he feels good in his work and I’m hoping he'll run a good race,” Van Niekerk said.

The rider has tasted G1 success on 10 occasions in his native South Africa but success at the top level in Hong Kong has eluded him thus far, with his highest level win coming earlier this season aboard Seasons Bloom in the G2 Premier Bowl Handicap. He also tallied a G3 score last season aboard Flying Thunder.

“Winning those big ones in December, that’s the ideal, but it’s not easy, it's rare to win one and it’s a great achievement.”
Van Niekerk has 12 wins to his name so far this season and sits fourth in the premiership behind last season’s dominant trio of Zac Purton, Joao Moreira and Karis Teetan.

“The season is going well but you can't do it without the support. Any jockey in Hong Kong, as long as they have support, they’ll do well,” he said.

“But it comes down to the horse; if you get on the good horses you can make it work.”

While Van Niekerk is pleased to link up with Hot King Prawn, Size has no shortage of talent in Sunday’s G2 as four of his five chances are G1 winners, with the exception of Full Of Beauty.

“They’re all quite exposed, we know what they’ve done in the past but reputations don’t win races they have to reproduce it this season to come up and compete with all of the others,” Size said.

“Beat The Clock seems normal, obviously he is older but his health, fitness and soundness seems the same way it was,” he added of the field’s highest-rated horse and two-time G1 winner.

“If he had gate 1 he might acquit himself a bit better, that’s a very awkward draw for him and he might have to get a trail or slot in somewhere further back in the field. If he goes forward he’s just going to get caught deep,” the handler said.

Size’s assault also includes the admirable but fragile D B Pin, who has finished runner-up in the last two renewals of the G1 LONGINES Hong Kong Sprint.

“It’s a very interesting race,” Size added. “It’s a good contest and it’s a good mix of horses as recently in the last few years we’ve just had a small bunch of horses race against each other, but now they seem to come from everywhere for this race.”