Hong Kong’s season of achievements ends on a high 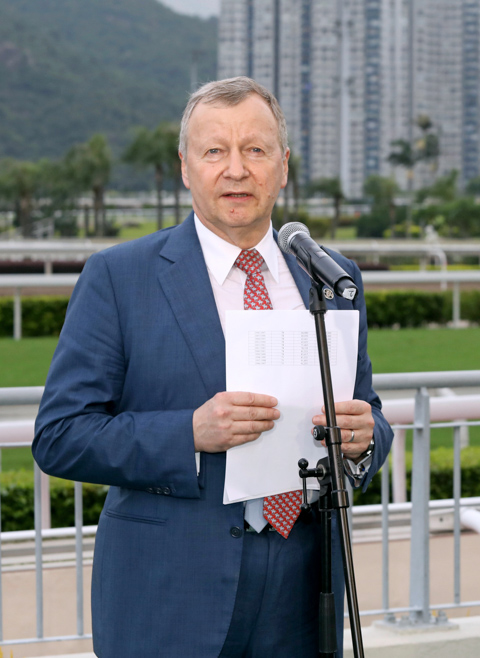 An enthusiastic crowd of 51,000 people turned out to see Size post a double to repel John Moore’s challenge for championship honours. That turnout was the highest since 2012 and took the season’s total attendance to 2.21 million, a 3.3% increase on the 2017/18 season.

Mr. Winfried Engelbrecht-Bresges, Chief Executive Officer at the Hong Kong Jockey Club, said: “John Size won a fantastic battle for the trainers’ championship with John Moore and that definitely enticed a lot of customers to come racing – we could not have planned it better.

The CEO said: “Today we had record turnover for a season finale. It has been a challenging year with a lot of ups and downs, so to end the season with an increase in turnover is one of several positives we will take into next season.

“The major growth driver was definitely commingling, which showed fantastic results and increased by 13 per cent. But what counts is the gross margin, and, in the circumstances of a challenging environment we are very satisfied that we have seen that increase by one per cent to HK$5.54 billion.”

Mr. Engelbrecht-Bresges applauded the many sporting achievements in a season that produced world class stars in Beauty Generation and Exultant, and also saw Zac Purton achieve records and milestones, including a season’s best 168 wins, a total just two short of Joao Moreira’s record.

He said: “We have to salute our champions. This was a fantastic year for the quality of Hong Kong racing. We have only 0.7 per cent of the world’s racehorse population, but when you see the quality of races and horses we have here it is something Hong Kong can be extremely proud of.

“It takes a lot of effort in a very competitive environment to achieve these results. We have no breeding industry, so we depend on our owners to bring the right horses in to help continue these amazing results year on year. Once again, to see 25 Hong Kong horses in the World’s Best Racehorse Rankings and eleven of Hong Kong’s twelve Group 1 contests in the World’s Top 100 Group 1 Races is extremely satisfying.

“Zac Purton’s performance across the whole season was incredible. He broke his own personal record with 168 winners, won seven Group 1 races along the way, and also broke Joao Moreira’s single season prize money record. He is an exceptional champion jockey.”

He said: “Vincent Ho is definitely a deserving winner of the Tony Cruz Award. He is a perfect example of our commitment to grooming Hong Kong talent and striving for excellence, and it was really fitting that he won the very last race of the season on Fast Most Furious.”

Conghua Racecourse opened in August last year and the first race meeting was staged there in March. The facility has already proved its worth to the Hong Kong racing industry with 78 individual winners of 109 races prepared at Conghua prior to winning.

“Conghua has far exceeded our expectation,” Mr. Engelbrecht-Bresges said. “Conghua is not only now a training centre, but it is also a functioning racecourse. Our first Exhibition Raceday there in March was extremely important in establishing Conghua’s importance not just for us but also for the Greater Bay Area development.

“For the future growth of Hong Kong racing, Conghua is very important. Opening up a facility is one thing but filling it with life and getting acceptance from trainers and owners for such a huge new project is something we knew would be very challenging. This project gives us plenty of opportunities and we have to thank our owners and trainers for making this vision come true and embracing it.”

Mr. Engelbrecht-Bresges observed that “next year will be challenging but that is something we are used to” and also affirmed that “The Jockey Club is always striving for improvement – we want to be world-class in everything we do.”

He continued: “Our commitment to world-class racing is demonstrated by a significant prize money increase to HK$1.3 billion next season. If you look at average prize money we have the highest in the world and we want to keep that status in order to incentivise owners to bring top class horses here and also to maintain our contributions to the community through tax, employment and last but not least our charity contributions.”

Mr. Engelbrecht-Bresges said: “Given our pursuit of world class excellence, it is therefore fitting that we presented a world-class jockey like Douglas Whyte with a Lifetime Achievement Award today. We look forward to seeing how Douglas progresses as a trainer next season.”

The CEO thanked Hong Kong’s owners, racing professionals, racing fans, racing media and the team at the Hong Kong Jockey Club for their contributions to making the 2018/19 season such a success.