The LONGINES Hong Kong International Races delivered fantastic sporting action at Sha Tin Racecourse Sunday with Japan carrying off three of the four Group 1 features against the home team’s one.

Mr. Winfried Engelbrecht-Bresges, the Hong Kong Jockey Club’s Chief Executive Officer said: “The outcome of today’s races shows that it was a fantastic international race meeting. Our Irish friends missed out on a little bit of luck in the Cup but really it was a day for our Japanese friends. They have supported us with a lot of horses coming for this meeting.

“The quality and the excitement we have seen shows what Hong Kong racing is all about. It’s about world class sport and that is what makes us a unique value proposition.”

Turnover was a record for the meeting at HK$1.71 billion.

“We are more than delighted about the turnover. We could not have expected turnover like we had today,” Mr. Engelbrecht-Bresges said.

“The interesting part is that the local turnover, even though we had to close down some of our Off-Course Betting Branches, was above last year at HK$1.376 billion. The major growth seen today came from commingling turnover, which has been amazing. This shows that our strategy of globalistion, of making Hong Kong racing – with our integrity, with all the excitement, with the deep liquidity in our pool – available to the world, is working.

“The commingling turnover was HK$334 million, which is up by nearly 30% from HK$258 million last year.

“But today was not about the turnover,” he noted, “it was about the sport and also how it showed the resilience of Hong Kong racing, and the excellence of the Hong Kong Jockey Club. It is a day to celebrate because despite a lot of challenges we have staged something that I don't think many organisations in the world could have done.” 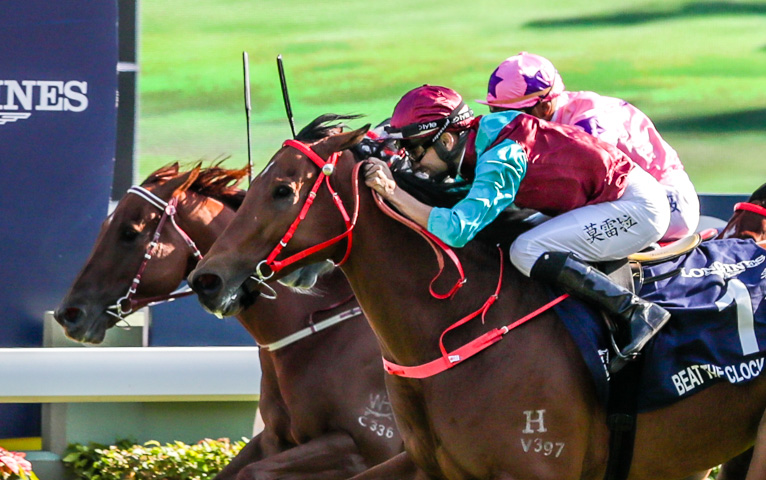 The afternoon’s event went ahead at a difficult time for Hong Kong, and, with a major protest planned and taking place on Hong Kong Island at the same time as the races, a crowd of 27,965 was well down on the usual figure.

Mr. Engelbrecht-Bresges said: “We deliberately were not pushing our attendance. We wanted to be absolutely sure that everybody who came to the races would be able to go home safely because we knew there was a big demonstration on the island and we didn't want to take a risk. We had a lot of in-depth planning for this meeting.

“For us to be able to stage this international event when all other major sporting events here have been cancelled, we have demonstrated that we manage what we do extremely professionally, with a real risk assessment.”

Mr. Engelbrecht-Bresges thanked the Club’s staff, the media in attendance and particularly the international horsemen who demonstrated their faith in the Hong Kong Jockey Club.

He said: “Thanks firstly to our outstanding people here in Hong Kong and second of all the international connections who have put their trust in us and have brought some of the best horses in the world to compete and put on a race meeting of real excellence.

“I thank the media for trusting us and coming here, and our colleagues and the media here in Hong Kong who have covered the race meeting exceptionally well. I thank all of you.”