The Caulfield Cup and Melbourne Cup are both handicap races, but they boast a completely different weight profile for winners.

Where Makybe Diva is the only horse to carry the No.1 saddlecloth to victory in a Melbourne Cup in more than 60 years, the 'toppy' has a much better strike-rate in the $5 million Caulfield feature, winning five of the past 20.

It makes Godolphin's decision to line-up with Hartnell, who is this year's topweight with 58kg, not as daunting as it might have seemed before the turn of the millennium.

Form Focus goes back 35 years and shows that from 1984 to 2001 just two of the 18 winners carried 55kg or more. Seven of the 17 editions since have been won by horses carrying at least 55kg, including five of the past seven.

Hartnell, Mirage Dancer, who has 56kg, Mustajeer, Mer De Glace and Rostropovich - all 55.5kg - are those with at least 55kg this year.

Three of those with 55kg-plus this year are internationals first-up in Australia, a trait shared by four of the past 11 Caulfield Cup winners, but the other two come through the right local lead-up.

Hartnell and Rostropovich ran fourth and ninth respectively in the 2000-metre Turnbull Stakes, which has been the final lead-up run for 11 of the past 35 Caulfield Cup winners, including five of the past seven winners who were coming off an Australian lead-up.

The only other final lead-up with more than four wins since 1984 is the Caulfield Stakes with nine, but it is not represented this year.

Finche (second in the Turnbull), Vow And Declare (fourth), first emergency Sound (seventh) and Mr Quickie (10th) are the other runners from this year's Turnbull.

Finche's Turnbull effort sealed Caulfield Cup favouritism but being the punters' pick has not been an asset in recent years.

Those already locked into Finche might have winced when they saw him land gate '19' at Wednesday's barrier draw, but wide alleys have become increasingly successful.

From 1984 to 2008, just eight of the 25 winners won from double-digit alleys, but six of the past 10 have started from gate 10 or wider, including Dunaden from 18 and Descarado and Best Solution from 15, which is the barrier Finche will start from if the emergencies don't start.

The hoodoo alley is the inside starting position - to be occupied by Big Duke this year - which has not produced a winner since 1941.

Four to the fore

We started on a positive for Hartnell, but we'll end on a negative for the nine-year-old, who will become the oldest winner of the race first run in 1879 if successful.

Taufan's Melody is one of only five eight-year-olds to win, and the only one since Amounis in 1930, while Dunaden, Admire Rakti and Ming Dynasty are the only seven-year-olds to score since 1950.

Big Duke is the lone eight-year-old in this year's race, with Mustajeer, Gold Mount, Red Verdon and emergencies Sound, True Self and Prince Of Arran the seven-year-olds.

Four-year-olds have the best record in the race, winning 49 of the 141 editions, with five-year-olds successful on 43 occasions. Only seven of those 5YO successes have come in the past 35 years, with 4YOs victorious 17 times.

There is strong representation by 4YOs this year via Angel Of Truth, Constantinople, Mr Quickie, Crown Prosecutor, Vow And Declare, The Chosen One and Qafila.

The Verdict: Wouldn't talk you out of fancied pair Vow And Declare or Mr Quickie, who are 4YOs coming out of the Turnbull, but siding with ROSTROPOVICH (technically only a 4YO, being bred in Europe), given his weight profile and $21 price with BetEasy. 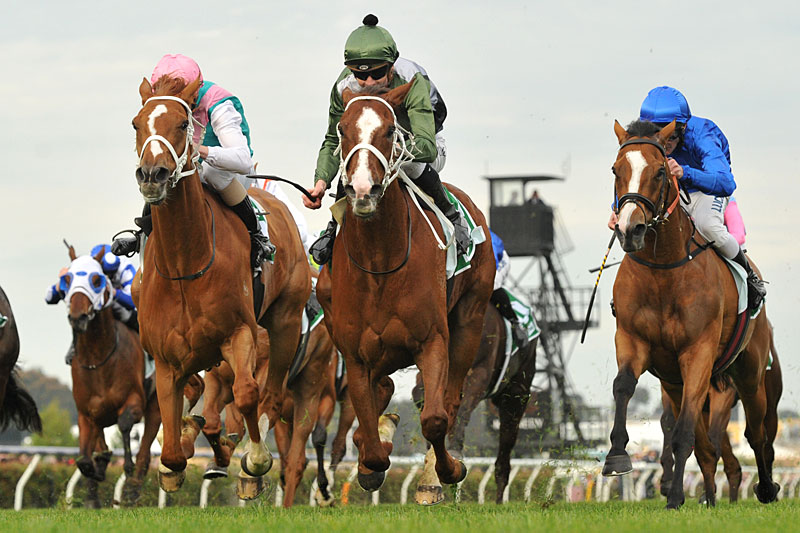 Kings Will Dream (IRE) winning the Group 1 Turnbull Stakes (2000m) with Finche (GB) outside and Hartnell (GB) inside, picture Quentinjlang.com