High for Fownes as Beauty Generation is beaten

There was fist-pumping and whooping, high-fives and firm clasps for all hands within reach of the Rise High camp; deflation and ‘brave face’ acceptance from the Beauty Generation team.

The champion’s win streak ended at 10 after a third-place finish in the G2 Oriental Watch Sha Tin Trophy Handicap (1600m) this afternoon (Sunday, 20 October) – his first defeat since 8 April, 2018.

“It was wonderful,” trainer Caspar Fownes said after his 16/1 shot had tugged Beauty Generation’s mantle of invincibility to reveal a chink of vulnerability.

“How can you expect that? Beauty Generation is such a superstar, a champion horse.  I was just saying walking over with my boys, that’s what racing’s about – champions get beat and let’s hope we do it today.”

Beauty Generation’s unexpected reversal at odds of 1.3 came one day after Europe’s star stayer Stradivarius had his own winning run ended at 10, and followed the defeat two weeks ago of Europe’s darling Enable, who failed to make it 13 in a row when second in the Prix de l’Arc de Triomphe.

“Just forgive him for it – wait for set-weights and see what happens,” Beauty Generation’s trainer John Moore said, noting the 14lb weight concession to the winner.

“It just wasn’t run to suit either, he’s a better horse when he’s left to run along but when he’s in the box seat like that he just doesn't show the same turn-of-foot. It was just circumstances that prevented him from rolling along like he likes to. You could see he was heavily-restrained in behind and he just wasn’t comfortable like that.

“I’d have rather had a wider gate and been able to come across and be where he wants to be but getting gate two was probably the negative about the whole thing. He’s pulled up ok.”

Zac Purton was pleased, to a degree, with his mount’s effort under a burden of 133lb: “He still ran well,” he said. 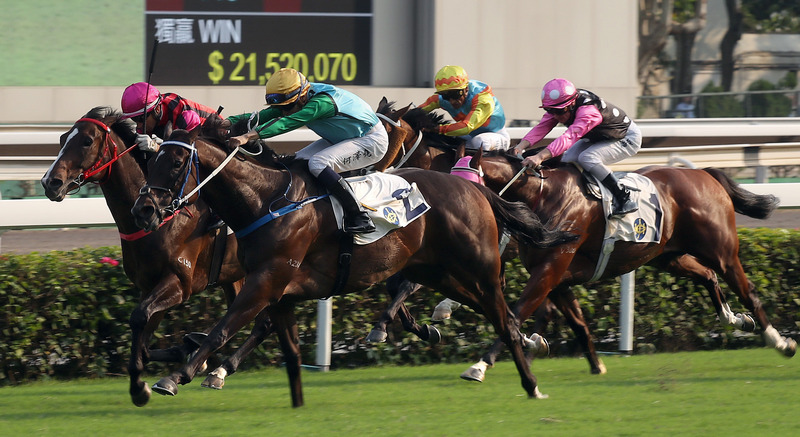 But the Sha Tin faithful are accustomed to seeing their pink-hooded hero roll his rivals, either by galloping relentlessly from the front or sitting outside the pace and then quickening powerfully off the final turn.

This time, Purton settled Beauty Generation behind a front two of Ka Ying Star (113lb) and Glorious Forever (117lb). When he pulled three deep for a run with 600 metres to race, the crowd was expectant, but this time his burst to the lead did not take him clear.

Not one but two rivals had his measure. Waikuku (115lb) stalked ominously under Joao Moreira while the Vincent Ho-ridden Rise High (119lb) threw down a seismic challenge down the middle of the track. The challengers passed the champ together at the 150m mark and drew two lengths ahead – Rise High bagged the win by a neck.

“He jumped well but he was still fresh so when they steadied the pace down he began to over-race but he’s genuine enough to still hold his spot okay and wasn’t doing too much. They picked up at the right time and when Joao on Waikuku went after Beauty Generation, I just got the gap and I knew he’d have a really good turn-of-foot,” Ho said.

“I’m very emotional, very happy – I’ve been saying it for a while, I think Rise High’s the next big thing in Hong Kong,” Fownes said.

“Saddling-up today he was on, he was really on, he nearly hurt himself. He was kicking his back legs and just kept knocking the inside of his hock – I was like ‘ease up dude!’ but he’s well and once we get him to the right trip it’s exciting times ahead. I’ve said it for a while.

“You're not going to screw them down first-up but at the same time you want to see them close off in a nice mile, which he was always going to do. To come out and win is a massive bonus and to beat the champion is even better.”

“I knew he was still only about 80 per cent today but he’s gone and beaten them well. He’s going to be a good horse for sure, he’ll only be fitter for this run,” he said.

“He’ll race in November next and in December he’ll be entered for the Hong Kong Cup over 2000 metres and the Vase over 2400 metres. Entries are free so we’ll have a look and make the decision which way we go after his next run,” Fownes said of the Myboycharlie five-year-old.

“He keeps improving. Every season he’s got stronger, he’s shown us that and his rating will climb up to maybe 128 or 129 and I’m looking forward to when he gets over the right trip, over 2000 metres, so it’s exciting times ahead. Let’s see what happens next start, we’re up against Exultant who has been a superstar stayer here.”

Ho wrapped the card with a hat-trick, following up his feature win with an exciting score in the next on the emerging talent Golden Sixty, immediately before taking the finale on Preciousship.

“He did very well, drawn one - the goal was to relax him and just try to look for a run but the run just came about and I was very lucky, once I got clear I knew he was going to win,” Ho said.

All Rispoli’s saying is give jocks a chance

Umberto Rispoli climbed off the premiership’s bottom rung with a welcome first win of the season, leaving Lyle Hewitson, Ben So, Alex Lai and the injured Victor Wong the only jockeys without a win this term.

The Italian had just two rides at Happy Valley on Wednesday and four today, so making every mount count was vital and he wasted no time. A wide, late run on the David Ferraris-trained Blazing Partners snagged the opener, the Class 5 Piaget Excellent Handicap (1400m).

“If he ran like he did when he was third, he was one of the chances – draw 11 made it complicated but I rode him for luck from the back and in the straight. I was trying to be aggressive at first but he didn't respond, so then I was gentle, just hands and heels, shaking the reins left and right, and he responded very well to the line,” Rispoli said.

The rider found a valuable ally in Ferraris last season, with the South African providing four of his 25 wins. The partnership headed into this afternoon’s meeting without a win together for this campaign but with a 43% place strike rate.

“We’re both in a similar situation – I need help and he needs help. His horses are well but they seem to draw wide a lot and that makes it more difficult,” the rider said.

And Rispoli noted the difficulties for Hong Kong’s riders in the Joao Moreira-Zac Purton era.

“Almost all the time I do what the trainer asks of me but you only have one bullet in the gun so you have to use it otherwise the big boys take the ride away, which I think is a little unfair on those of us outside the top two or three.”

It was the 10lb claimer’s first double since his breakthrough Hong Kong wins on 7 April and took his season’s tally to five.

Purton notched a score on the Benno Yung-trained Such A Happiness, while Moreira’s win came on Aerohappiness for John Size.