Harry sticks with Merlion winner for another Lion's share

Big-race jockey A’Isisuhairi ‘Harry’ Kasim confided that most people thought he must have had a brain fade – or gone “gila” (Malay for crazy) in local speak - when he picked Excelling over Mr Malek for this Sunday’s $400,000 Group 1 Lion City Cup (1200m).

Not that Mr Malek is 10 lengths better than his Lee Freedman stablemate, far from it, but it’s just that the oomph factor on the former has generally been a few decibels louder.

Mind you, Excelling is no slouch with his handy stats of five wins from 10 starts, including a spirited Group 2 win in the Merlion Trophy (1200m) at his last start on August 23. Besides, the Manhattan Rain six-year-old has a lot more mileage under the bonnet having also scored twice in New South Wales from eight starts when then prepared by top Warwick Farm trainer Joseph Pride. 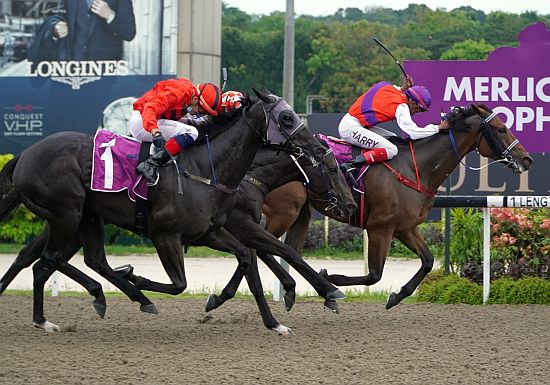 A'Isisuhairi Kasim punches Excelling out to a big win in the Merlion Trophy in August, picture Singapore Turf Club

But Mr Malek, a four-year-old son of Swiss Ace, has captured the imagination just a touch more with his meteoric rise from Restricted Maiden level to now boast a smart record of six wins and two thirds from eight starts. His brilliant turn of foot is arguably second to none among his peers, except maybe for Inferno.

A’Isisuhairi also knows Mr Malek a lot better for having partnered him three times for the last two of his six wins. The Kelantan-born rider got onto Excelling only once, at that Merlion Trophy win when they drew one and had a ground-saving run throughout before thwarting the late Bold Thruster in his usual tradesmanlike manner.

And it’s an open secret that A’Isisuhairi had long declared Mr Malek as his pet horse ever since he’s turned into the go-to jockey at the Freedman yard.

So, how come he “dumped his sweetheart” in a Group 1 race that he would undoubtedly love to add to his stellar collection of 10 feature race wins?

The former two-time Singapore champion apprentice jockey said his heart told him Mr Malek, but in the end he listened to his head. It was the distance that swayed him.

“Lots of people asked me why I chose Excelling and not Malek (as he calls the Oscar Racing Stable-owned galloper), who as everybody knows, is my favourite horse,” said A’Isisuhairi who is returning from a three-meeting suspension for careless riding.

“Lee gave me the right to choose. It was a very tough decision for me to make as both are good horses, and I’ve won on both, but in the end, I went with Excelling mainly because it’s a sprint race.

“It’s quite a strong sprint race with all the top sprinters like Fame Star, Grand Koonta and Skywalk, but I also won a very nice race on Excelling in the Group 2 Merlion Trophy. He’s proven at that level and over those trips.

“He also trialled very well last week (won on October 18), and I galloped him on Tuesday, and he gave me a very good feeling. He’s in very good condition, and Lee is also very happy with him.

“I had to choose my ride after the trial, and that’s when I picked Excelling. No doubt, I love Malek to bits, but he’s probably better from 1400m to the mile.

“He also missed the Singapore Guineas (September 26) after Lee wasn’t happy with him, when he met with some issues. I have ridden him in trackwork, and he’s fine now, but he hasn’t raced for six weeks now.

“If the race were over 1400m, I would definitely have chosen Malek. It was always Lee’s plan to run Excelling in the Lion City Cup, and even if he doesn’t tell you a lot, you know he is also looking for something in the stable that has the best chance.”

The reins for Mr Malek have been handed to in-form jockey and No 1 challenger to reigning champion jockey Vlad Duric’s crown, Ruan Maia. A’Isisuhairi hopes he has pulled the right rein, but said he would be the first to congratulate Maia and Freedman should Mr Malek prove him wrong.

“I hope I made the right decision, but even if Malek wins, I’ll be happy for him,” he said.

“I’ll be happy for the stable. I was actually given the ride on Grand Koonta (trained by James Peters) after I last won on him, but Lee is going good and his horses are in top form, I have to stick with them.

“He’s given me many quality horses to ride, and I’m grateful for the support. I hope I can keep riding more winners for Lee, and fingers crossed, another Group 1 and a first Group 1 (in combination) with Lee this Sunday.

“I really think Excelling will do well. I was actually very happy when the draws came out and he drew two, it would have been terrible if he drew out and Mr Malek (who, as it turned out, drew 14 of 16) drew in.

“I think there’ll be a solid speed from the outside early, I can then take a sit and relax in second or third with cover. He’s a horse who can pull a bit, so I’d rather not lead.

“If he does land in front, it’ll have to be a soft lead but I think it’s unlikely as there should be quite a few who will go forward from the outside. I think it’ll be quite tough for the backmarkers.”

A’Isisuhairi’s speed analysis was a thinly-veiled wish that Mr Malek and likely hot favourite Inferno will struggle to make ground on the Short Course.

As much as A’Isisuhairi and Maia are good mates, the latter would be hoping the Malaysian hoop erred in his judgement, but even if he didn’t, the Brazilian, who is currently the man with the Midas touch at Kranji, can still steer Mr Malek home on his own merit.

Maia actually thought all along his name would be next to Excelling on the Sunday racecard, but he couldn’t have hoped for a better “castoff” in the end.

“Mr Freedman sent me a text about riding Excelling around three weeks ago. At the time, I was also offered to ride Zac Kasa and Aramani, but I was quite happy to take the ride on Excelling,” said Maia.

“Then Harry told me he was riding Excelling, which was quite surprising. That’s how I ended up riding Mr Malek, a horse I really like.

“I know he was supposed to have run in the Guineas, but Harry told me the horse has improved since. I galloped him once myself, last Tuesday, and it wasn’t bad, he gave me a good feeling.

“It was an easy gallop, he was fresh and fit, his action was good. He’s a quiet horse in the morning, and I’m sure when I test him in his race, he will respond.

“I’m not too worried about the wide draw. I think three to four horses will go forward, and hopefully I can find a nice spot in the middle to make things easier for me.

“Inferno is the best horse in the field and I respect him a lot, but we’ll see what happens. I can only hope I can win a third Group 1 race here in Singapore.”

Maia has been cutting a swathe since racing resumed during the Circuit Breaker on July 11, so much so he went on to add a second Group 1 success on Aramaayo in the Raffles Cup two weeks ago, two months after the first one captured with the same horse in the Kranji Mile in August.

With the way the former two-time Macau champion jockey has also been winning races by the spades at Kranji, he has in the last couple of months been rattling three-time Singapore champion jockey Duric’s confidence in winning a fourth title in a row.

The once yawning gap, which at one stage was almost double at the beginning of August (Duric on 39 wins and Maia on 20 wins), has since melted away with Maia now breathing down Duric’s neck only five winners away (55 versus 50).

With Duric riding Inferno, the subplot that is the premiership fight between the two jockeys may well take another twist should one of them lift Singapore’s premier sprint trophy on Sunday.