Irish import So Hi Class benefitted from a light weight and an ideal hold-up run in midfield to post a brilliant win in the $70,000 Class 3 race over 1600m at Kranji on Saturday.

With only 52.5kgs courtesy of leading apprentice jockey Hakim Kamaruddin’s two-kilo claim and a dream run on the rails, the Dark Angel five-year-old sliced through the pack at the 300m with a devastating acceleration which none of his 11 rivals would be able to match.

The Kuwaiti-owned galloper showed no signs of letting up even when the swoopers like King’s Command (A’Isisuhairi Kasim), Federation (Juan Paul van der Merwe) and his better-fancied stablemate Tiger Roar (Shafrizal Saleh) came descending on him thick and fast. 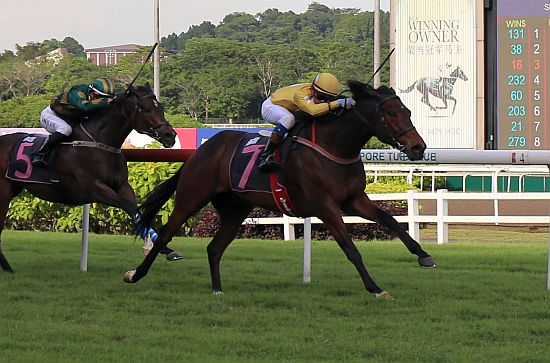 So Hi Class ($21) showed plenty of ticker to hold down a 1 ¼-length margin on the fast-closing King’s Command with race-leader Circuit Mission (Simon Kok Wei Hoong) hanging on gamely for third place another head away.

A little hampered for a run in the home straight – van der Merwe was seen checking him when the gaps closed - Federation still boxed on well to just miss a podium finish by a short head. The winning time was 1min 35.03secs for the mile on the Long Course.

“I told Hakim the key to this horse is to get cover behind the leaders, and only then, he will show a nice turn of foot.

“I also told him he’s a horse who will jump well, but he should lock him down and make sure he’s not keen.

“He was unlucky not to have won last start. We thought Class 3 would be tough for him, but he proved us wrong.

“We’ve been thinking about putting Hakim on this horse for a while. We know how well he’s going and we’re fortunate to have him on today.”

With a riding double earned after he brought up one winner earlier – Marcus Antonius for his master Mark Walker – Hakim cements his massive lead in the Singapore apprentice jockeys’ premiership. The Kelantan-born rider now sits well clear on top with 25 winners, a whopping 16 clear of Krisna Thangamani who, however, was able to cut back the lead with a mid-programme buffer on the Kuah Cheng Tee-trained Flying Yellow in the $30,000 Class 5 Division 2 race over the Polytrack mile.

“It’s a very nice horse. He was travelling relaxed for me on the fence,” said Hakim.

“At the 600m, I knew my horse was going to fight out the finish because he was going very well.”

So Hi Class has now taken his handy record to four wins and two thirds from 15 starts for stakes money closing in on the $140,000 mark for the Al Rashid Stable.

Tiger Roar who was making a last-ditch attempt to get into the Group 1 Kranji Mile (1600m) on May 22, spurned his chances with a moderate fifth place given only a big win could have saved him. Usually a get-back horse who wins his races coming off looping runs from the 600m, he was too far back this time, and though he lost no marks with a late run, it wasn’t the result the Clements camp needed for a berth in the $1 million feature race next Saturday.