Gray not overthinking about Derby

Under normal circumstances, trainer Stephen Gray wouldn’t have given the Singapore Derby a second thought for Hard Too Think, but these are hardly normal times we live in these days.

On ratings and ability alone, Gray thought the All Too Hard four-year-old was not quite in the same class as Mr Malek, Big Hearted or Rocket Star, let alone take them on at level weights. 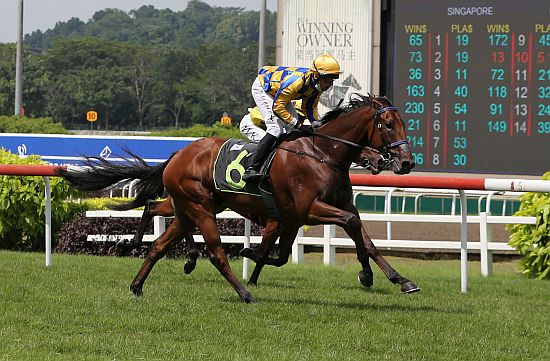 The Group 1 Singapore Gold Cup, on the other hand, is a handicap race where Hard Too Think would get in at a low weight, plus the 2000m is even more his cup of tea.

So Gray thought. He still entered Hard Too Think, more as a contingency, but when he saw the Derby nominations, he did have second thoughts – and, probably, against his better judgement, decided to have a roll of the dice.

“I could have run him in a Class 3 race but it was then changed into a Kranji Stakes B 1800m race worth $85,000,” said Gray who has booked Hard Too Think’s most successful partner (aboard at two of his three wins) Marc Lerner for the Derby ride.

“Michael Clements has four good horses in that race, easy pickings for him on paper, and then, we have a $400,000 race.

“His race is the Gold Cup but the Derby has fallen into his path. Usually, he wouldn’t get in if you go on his ratings at level weights.

“To be honest, it’s not about what could happen but more what will happen, but the good news is he can stay.

This year’s renewal not being the vintage Derby of yesteryear is a bit of a Catch-22 to Gray. It’s good for those who want to turn giant-killers like him, but he’s also concerned which way it may head if the quality of horseflesh is not raised.

“It’s all about having the right horse. Lim’s Prestige (Gray’s only Singapore Derby winner in 2007) was a good horse and peaked at the right time, it’s all about timing.

“But it’s a sign of the times when you see Michael Clements, who’s got 70 horses and Mark Walker who’s got around 65 horses, and they both have only one four-year-old each. Where has the quality gone?

“Owners are all in the game in the hope to see their horses run in Cup races, so, in a way, we’re having a go, but this is a prime example of a great opportunity of winning good prizemoney when the competition is not as good.

“But that shouldn’t be the way. Long-term, it can only get better when feature races and better prizemoney are back on, owners will then invest in quality.

“COVID-19 has brought everything to a head, but we can’t use that as an excuse. Now, the owners all wait and see.”

While Gray is not holding his breath about a happy outcome on Sunday, he had been looking forward to hosting owners and guests for the Derby, but that has also ended in bitter disappointment with the reversion to COVID-19’s Phase 2 (Heightened Alert).

“It’s very disappointing. I had booked tables for 25 pax upstairs and they were all so excited but this return to new heightened Phase 2 with no visitors allowed in has ruined everything,” said Gray.

“I feel sorry for them as they’ve waited so long to come back to the races. It’s also a blow for the Club, the F&B people, all because of some irresponsible people who breached the sanitary rules.”

Restrictions were barely eased on Monday that the next day, it was back to square one due to a recent spike in COVID-19 cases due to an outbreak known as the KTV and Jurong Fishery Port clusters.