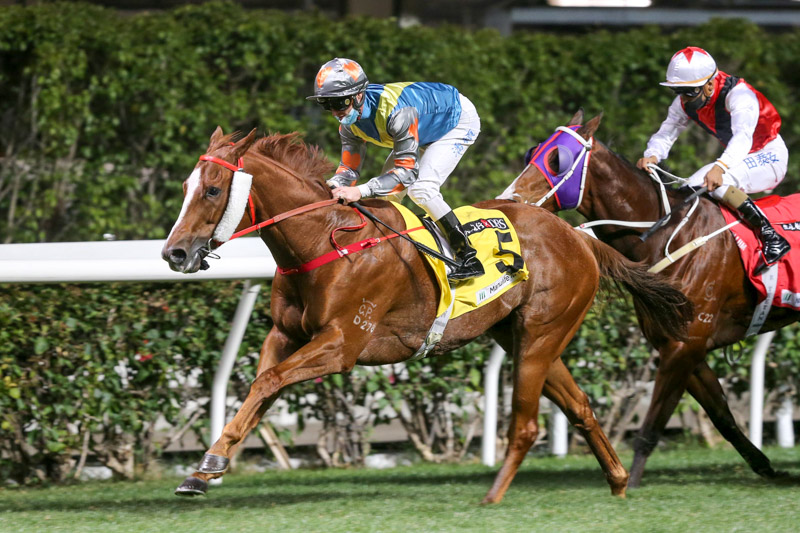 Joining Shum’s previous winners – Speedy Longwah (2016) and Charity Glory (2018) – Grateful Heart was clearly the best-performed runner in the series, which stretched from September to Wednesday night (24 February), with four wins, a second and a third at the city circuit.

A constant force in sprint contests at the Valley, Grateful Heart boosted his series record to 70 points by posting a third to Sky Field in the Class 1 Blue Pool Handicap (1200m), collecting four points.

That left the Written Tycoon gelding tenuously placed with a 13-point buffer over Scores Of Fun, who was in a position to claim overall honours by lifting the Class 3 Sing Woo Handicap (1200m) two races later under the 15-6-4-3 points format.

But John Size’s charge endured an interrupted run for Vagner Borges and crossed the line in seventh place behind Dennis Yip’s Racing Fighter.

Shum was elated with Grateful Heart’s effort to secure the HK$650,000 first prize, a figure further boosted by prizemoney of HK$345,000 to add further lustre for the chestnut’s connections.

“He deserved it because he had four wins, one second and one third,” Shum said.

“The horse always tries his best - he deserved to get his reward. It’s good, we’re very happy.”

Fownes predicts a bright future for the four-year-old after he charged down the outside under Alexis Badel to deny Stronger by a head in 1m 8.84s.

“He’s still learning, but he’s a good horse. Once he starts to really chill with maturity, he’ll be a lot of fun,” Fownes said.

“I’m very happy to get that result for the owners, it’s a massive win for them because they get the $1.5 million bonus with it as well, so it’s just magic.

“He’s still got it ahead of him but it’s exciting when you know he’s got a massive engine.

“He’s a triple-figure (rating) horse for sure. By the end of the season, he’ll be into triple figures and we’ll have something to look forward to in December.”

Fownes regained the lead in the trainers’ championship from John Size with a treble as Daily Beauty surged to Class 4 Wang Tak Handicap (1200m) victory for Joao Moreira before the Brazilian successfully combined with Green Luck in the Class 3 Tsui Man Handicap (1650m).

Fownes shades Size 46-44, while Moreira maintained the jockeys’ championship status quo – and a 93-64 margin – over Purton, who triumphed on Racing Fighter in the Class 3 Sing Woo Handicap (1200m).

Solar Wai Wai proved his liking for the Valley’s 1650m trip with a fourth victory at the trip for Frankie Lor and Matthew Poon, lifting the Class 1 Shan Kwong Handicap.

Posting his sixth win from 23 starts, Solar Wai Wai is likely to be given more opportunities at his pet distance.

Douglas Whyte and Vincent Ho combined with Harmony Fire, a son of Brazen Beau having only his second start, to claim the Class 4 Village Handicap (1000m).