Seasoned 5-year-old Grandview Avenue (by Statue of Liberty (USA)) continued a purple patch of form with a clear-cut victory in the $140,000, Listed, Fiorente @ Sun Stud Carlyon Stakes (1000m) at Moonee Valley in Melbourne — his maiden black-type success at start No. 35.

The unexpected winner of a 955m Moonee Valley dash at his previous outing when rolling the $1.50 favourite Meteorite, Grandview Avenue backed-up eight days later and produced a repeat performance, proving too brilliant over the Valley’s slightly further ‘five-furlong‘ circuit for a bona fide field of stakes class sprinters.

Bounced straight on to the pace by apprentice rider Teo Nugent, Grandview Avenue turned for home in advance of all of his main rivals before putting a definitive gap on them in the race to the finishing line.

The Warrnambool-trained sprinter finished comfortably clear of Prophet’s Thumb (by I Am Invincible) in second and Prezado (by Denman) in third. In fact, Grandview Avenue scored by one and three-quarter lengths, with Prophet’s Thumb finishing one-and-a-half lengths ahead of Prezado in third. 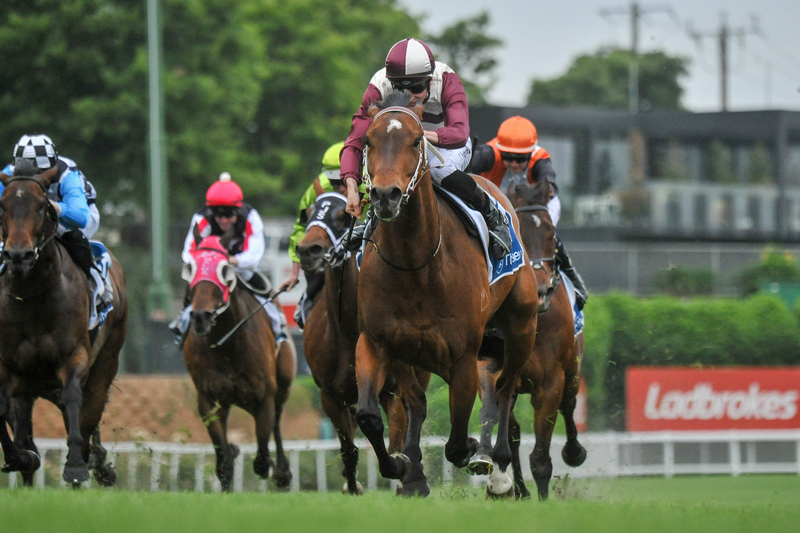 One of only a handful of horses in training with Simon Ryan, Grandview Avenue has now turned in two consecutive career-best performances at Moonee Valley  — a point which didn’t escape Ryan.

“He’s winning these races comfortably,” remarked Ryan after his latest success. “He’s gone to another level today. It caught me by surprise today.

“I’ve probably got to take a bit of the blame from previous preparations. I’ve tried to get him out to 1200 or a bit further. He’s so placid and docile that I was looking for further, but keeping him to the shorter trips just seems to be agreeing with him.”

Ryan added: “To be honest, it has caught me completely off guard. We thought he’d run well but couldn’t have foreseen that. It’ll sink in on the way home. Really proud of the horse and he’s come a long way.

Grandview Avenue’s victory was also a major breakthrough win for Nugent, who was greatly appreciative of the opportunity after the win.

“I just want to say a massive thanks to Simon and his father-in-law for keeping me aboard,” observed Nugent.

“I used to ride this horse a lot early days when he broke his maiden, and I won on him at Dunkeld. To see him progress through the grades … he put the writing on the wall at Flemington when finished a creditable fifth.

“He gave them weight last start in the 955-metre race and he ran some time. I was really confident coming into today.

“We drew a little bit of a stick gate and we were in two minds whether we rolled forward or just ride him with a bit of cover. He flew the gates and we landed in a lovely spot outside the leader. He gave one hell of a kick when I asked him at the top of the straight. Good effort.”

Nugent added in reference to his own career: “It’s a very hard time of year. I’ve quietened down since I’ve been down to 1.5 kilos.

“I’ve got about 23 winners left of my claim in town. I only claim 1.5 but I’ve noticed over the past couple of months that I’m only coming to the races for two or three rides in the city. Today I came here for one and that’s all we needed.”

A Flemington straight track specialist, Prezado turned in an eye-catching performance to fill the minor placing at his first start of a new campaign.

Drawn in Barrier 1 and ridden in midfield for the majority of the contest next to the fence, the Mathew Ellerton & Simon Zahra trained galloper made good late progress when extricated off the fence by Jamie Kah.