There was a thrilling dead-heat between Thea Gosden-Hood and Candida Crawford in the Magnolia Cup presented by Markel at Goodwood on Thursday. 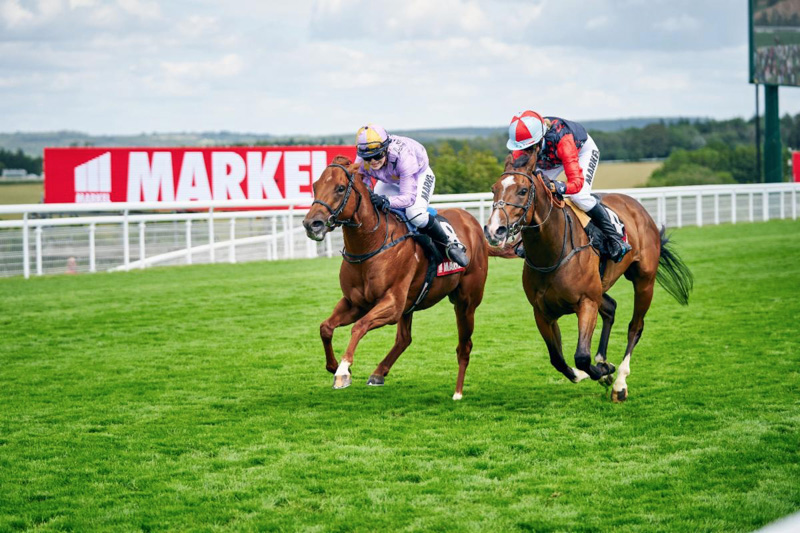 Now in its 10th year, the Magnolia Cup supports UK charity Smart Works, which assists unemployed women to harness their confidence ahead of a job interview. Since its inception, the Magnolia Cup has raised over £1.6 million.

Thea Gosden-Hood attempted to make all of the running on her mount She Got The Jockey, but she was gradually worn down by Candida Crawford on Mine Behind inside the final furlong, with the judge unable to split them crossing the line.

Gosden-Hood is the co-founder of Indigo & Ivy Events and daughter of leading trainer John Gosden while Crawford is an equestrian trainer and freelance rider.

Gosden-Hood said: “I had quite a tricky time on the way down so, to be fair, it is all a bit of a blur. I don't think we could get a better result unless all 10 of us finished in a line.

“Candida and I have been so close throughout whole process and the best part is to win it with her.

“Yeah, you'll see more of me a horse. I'm thrilled with the result, but I will be looking back thinking I rode so badly. I had a tricky time going down and I think the adrenaline just got to me. I never checked who was around and I didn't change my hands like we practised.

"The most important thing about today is that this is for charity. Smart Works are a brilliant charity who do some great work and it's great to be raising money for them.”

Crawford said: “I have to thank Jamie Osborne [trainer], he has been incredible. He has let me ride out for him, it has all been worth everything, and he let me ride such a lovely horse, he kindly gave me Good Earth [named Mine Behind in the race] and I am honoured to be riding such a horse.

“It all went so fast. I couldn’t have done it without that horse, he knew exactly what he was doing, and I just sat there and piloted. I was holding him and we started quite fast, and I knew Good Earth is a very good horse and I had to hold him, but I pushed him as soon as I could.

“He had a second engine and he was just phenomenal. Saffie Osborne kindly gave me advice how to ride him, I am very lucky to have had such a good horse and trainer.

“Coming out, I thought I was going to be sick. I came out of the paddock and I thought ‘What am I doing?’ He behaved well, so it was perfect. I only got the call up about two months’ ago, then I sat on my first Flat horse, it is a dream come true.

“It is completely different riding racehorses, especially Flat horses, they canter very flat too, so you feel like you are going downhill!

“I thought I was going to be third, being a bit arrogant, thinking I was going to be behind the two famous girls, but to be able to do that is amazing and it is all thanks to such a good horse, so thank you Jamie!”