And he did it despite his rider Vincent Ho’s view that he was not at his peak for this second of three legs in the Four-Year-Old Classic Series, having suffered a fever two weeks ago.

Ho enjoyed a rocket ride to victory on Golden Sixty in last month’s Hong Kong Classic Mile (1600m) but this time had to rely on his mount’s admirable guts and innate talent to keep alive the dream of a ‘Golden’ clean-sweep in this season’s Classic Series.

The Medaglia D’Oro gelding eased back and settled eighth in the 10-runner field as World Famous set the tempo up front. Stablemate More Than This, a late-closing second in the Classic Mile, rowed past Golden Sixty’s outside flank with around 500m to race but the real danger was ahead.

“Zac (Purton) took off quite early at the 500 (metres) on More Than This and came up outside me; but Ryan Moore’s horse had plenty more in the tank so I just tracked him through the race,” Ho said. 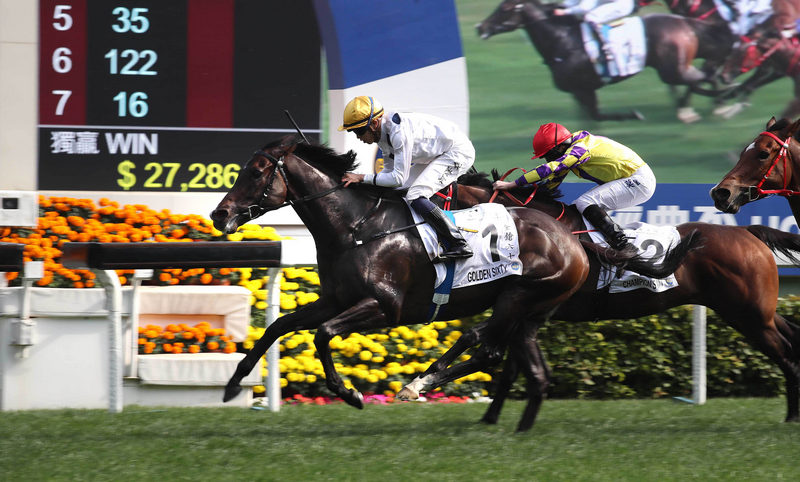 Moore, aware of the opportunity to steal a march, had fired Champion’s Way to the lead before Ho could angle out and point Golden Sixty into clear running. When Ho found the gap, his mount’s acceleration was less emphatic than the brilliant dash displayed in the Classic Mile but it proved decisive enough as he battled past his rival for a half-length score in 1m 45.88s. His closing 400m split was clocked at 22.38s.

“It didn't feel like a true run race but he’s really tough and he wants to fight – when horses come close to him, he wants to win,” Ho said.

“He’s a tough and talented horse. He had his issue two weeks ago and I just wanted to get him as relaxed as possible. It was his first time at 1800 metres and I followed the right horse, I didn't want to push the button too early because I might use him too much, so I’ve waited a little bit, found the gap and he’s sprinted home.”

Trainer Francis Lui was as relieved as he was delighted as he stood by the sundrenched winner’s arch awaiting Golden Sixty’s return.

“Everybody knew he had a temperature two weeks ago. I was very worried he would miss this race, I tried everything to work it out and finally we got it and he still performed today; he was a bit keen before the race so I was worried but he relaxed for Vincent and he is very tough,” Lui said.

That well-documented temperature spike caused missed work and much angst in the Golden Sixty camp. The gelding’s participation had been under discussion as late as Friday.

“I still wasn’t sure on Thursday if he’d run and after Friday’s gallop we still talked about it – if I wasn’t happy with the gallop we would have pulled him out,” Ho said

“He was really fresh – the last gallop I couldn’t really hold him – so I was concerned he’d be too keen today but once I got him behind the gate he was more relaxed than last time. He didn't pull, so I just had to get the right run – it was hard for him so I just hope he pulls up well.”

Golden Sixty now has the chance to emulate Rapper Dragon, the only horse to have won all three legs of the Four-Year-Old Classic Series. To do that, the Australian-bred must win the BMW Hong Kong Derby over 2000m at Sha Tin on 22 March.

“There’s still a month to the Derby so let’s hope he’s healthy – that’s all I’m concerned about,” Ho said. “We won't push him too hard for the Derby because our main priority is his health. He’s only four and he’s got a great future, even in Group 1 at a mile – that suits him well.”

Lui believes Golden Sixty is the horse everyone else has to beat in the Derby but he is not discounting his other contender, the seemingly more stamina-laden but also quirkier third-placed More Than This.

“At the moment, of course, I think Golden Sixty but More Than This is also a good horse and I think he also ran well,” the trainer said.

“I spoke to Zac (Purton) and he said More Than This just might need blinkers to help him because he’s quite relaxed, he can jump fast and of course today the draw (10) didn’t help him so he had to drop him out, but he just said he needs some headgear to wake him up, so we’ll think about that.”

Moore was pleased with the effort of the Size-trained Champion’s Way who improved on his third place in the Classic Mile.

“He’s a very honest horse, he ran super but the winner is obviously a very good horse,” the three-time British champion jockey said.

The Size stable’s Beauty Legacy was a disappointment. The Australian G2 winner pulled for his head in the Classic Mile but kept on for fourth on that occasion – this time he lost his head down the back and trailed in sixth.

“That was quite disappointing because he didn't really relax for me. We’ve been trying hard to teach him and as you could see in the back straight he was fighting with me and throwing his head up. We’re still in the learning process,” jockey Joao Moreira said.

There were more Derby clues in the Class 2 Lek Yuen Handicap (2000m) in which Amazing Beats (116lb) edged out fellow four-year-old Columbus County (124lb) by a nose, with another Classic Series hope Super Oasis (124lb) taking fourth in a blanket finish that also featured the fast-closing grey Glorious Dragon (132lb).

“He got the best run in the race and he had the lightest weight but he showed plenty of ticker and he showed the 2000 metres certainly doesn’t worry him,” trainer Paul O’Sullivan said of the winner.

“He won the Tasmanian Derby – the Hong Kong Derby is a little bit of a step up but he was a Group 3 type of horse going around the city tracks in Australia and whether that’s good enough to win a Hong Kong Derby I don’t know, but he’ll certainly get his chance now.”

The day kicked off with trainer Manfred Man registering his 500th career win thanks to All Best Friends in the opening Class 5 Wo Che Handicap (1200m) under Purton. The handler had notched win number 499 when his stable star Big Time Baby won the last race on Wednesday night’s card but he wasn’t counting.

“The press just told me it was the 500th winner – I didn't know that until then – it’s nothing special!” Man said.