A well-judged ride from Louis-Philippe Beuzelin was instrumental to Gold City’s gutsy win in the $50,000 Class 4 race over 1600m on Saturday.

The Frenchman was certainly in no hurry as he positioned the mare towards the rear, happy to see them all before steadily slipping up along the rails to take closer order by the 800m.

Turning for home, race-leader Golazo (Marc Lerner) was still whacking away along the rails and not far from making all, but he had not reckoned with Gold City who had come chipping away at the margin under Beuzelin’s forceful riding. 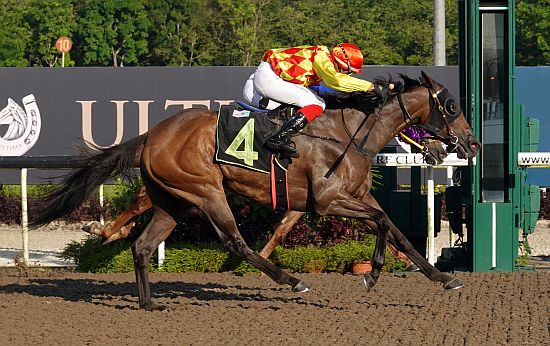 A head split the pair in favour of the seven-year-old mare by Sufficient at the wire. In spite of a tough run eye-balling Golazo at the head of affairs for most of the way, old stager Mcgregor (Benny Woodworth) battled hard another two lengths away to gain third place by a head from Foresto (A’Isisuhairi Kasim) with another veteran in Mighty Emperor (Krisna Thangamani) beaten a nose in fifth.

The winning time was 1min 39.5secs for the Polytrack mile. Gold City ($25) was registering her first win in close to two and a half years.

Trained by Cliff Brown, Gold City has now chalked up three wins in 24 starts, having also placed 10 times for stakes money that have reached around the $175,000 mark for the Yong family’s Gold Stable.

“It was a very good win. It was a well-deserved win,” said Brown who was cementing his fourth place on the Singapore trainers’ premiership on 24 winners.

“She had blinkers on for the first time and Louis gave her a very good ride. It’s good for the owners, they’ve been long supporters of mine.”

Brown said that he would just potter around in similar races for Gold City, with no set path charted.

“I’ve got no plans for her. We’ll just enjoy today’s win, make hay when we can!” said Brown.

The Australian handler faces a much bigger assignment next Saturday with his boom galloper Inferno running in the Group 1 Singapore Guineas (1600m).

While the heralding of a new Singapore star is in the offing, Saturday also brought the curtains down on his former champion Debt Collector’s glittering racing career.

Now known as Debt Agent after he moved to Australia in a bid to resurrect his racing career last year, the 2016 Singapore Horse of the Year ran last in the Group 1 Rupert Clarke Stakes (1400m) on Saturday, tailing off more than 20 lengths behind the winner Behemoth (Craig Williams). News later transpired that he had been retired.

A winner of 12 races in 24 starts at Kranji, including five at Group 1 level (he also claimed two Group 2s and one Group 3) and more than $3.1 million in prizemoney, the Thorn Park eight-year-old had eight starts for trainer Jim Conlan in Australia, all around Melbourne for no wins, with a fourth at Flemington as his best result.

“He was a marvellous and fantastic horse to us,” said Brown.

“One thing I want to highlight again is that everyone at the stable has done a lot of work to keep him going. They’ve done an amazing job.”