A striking chestnut colt set the not so inconsiderable task of jumping from the outside barrier in a field of 10, Paulele displayed a significant amount of early speed and tactical awareness to position close enough to a blistering pace to fully capitalise in the short Moonee Valley straight.

Asked to go on and win the race by John Allen soon after negotiating the Moonee Valley home turn, Paulele comfortably picked up Direct (by Siyouni (Fr)) entering the closing stages before registering a very impressive initial career win at the first time of asking.

Runner-up Direct in turn finished comfortably clear of minor placegetter Qeyaady (by I Am Invincible) after having chased the tearaway leader Brazen Boy from the outset.

Perfectly positioned to go on and win the race at the top of the straight, Direct had no answer for the ultimate victor when challenged, after having done a considerable amount of the ‘donkey work’ through the first half of the contest.

Qeyaady made reasonable late progress to run into the frame, as did the likes of Mr Scorefield in fourth and Prince Alexander in fifth.

Ridden to perfection by John Allen in a hotly contested juvenile event, Paulele answered all of his partner’s calls during the running of the race and left a very favourable impression on the expatriate Irishman. 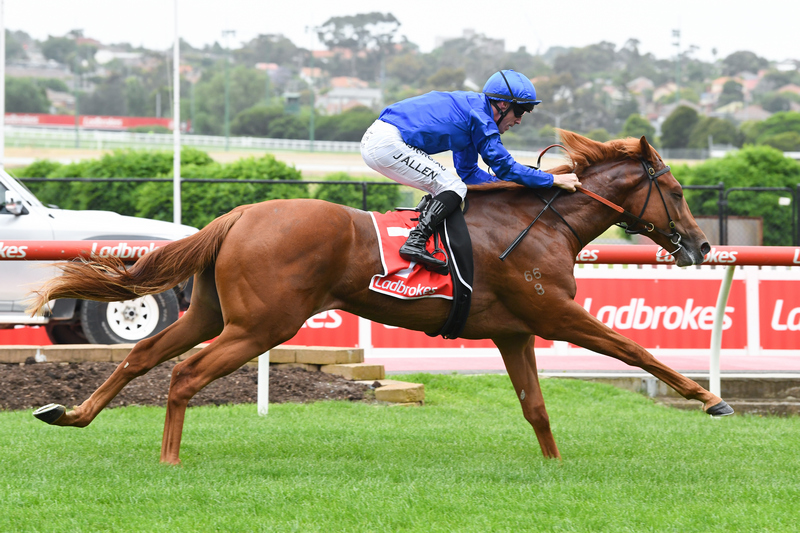 “Beautiful style of horse,” declared Allen at the beginning of his post-race interview. “My first time sitting on him, but I was impressed.

“I looked at his jump-outs and even his work here the other morning, and he looked ready to go. He did it good today, still quite green, but won with a bit of authority.”

Allen added: “They scooted along quickly. We were drawn wide; sat a little wide in the run, but we were able to flow into it when we liked and it was evident that he had the leaders covered turning in.

“He wandered a bit when he hit the front… He won like a nice colt and I’m sure he’ll have bigger targets down the line.”

Sean Keogh remarked when speaking on behalf of the winning Godolphin stable, “There’s a lot more to come from this horse. He had plenty of pace and was traveling pretty easy. If anything, John probably got there a bit too soon, but nonetheless it was a good win.”

Official margins on the race were 2L x 2L.

Looking the very image of his sire, Paulele is a son of Dawn Approach (Ire), one of Europe’s leading 3-year-old milers of his generation who was also precocious enough to win the very first race of his 2-year-old season in Ireland.

Paulele is actually from the fourth domestic crop of Dawn Approach (Ire), which only numbered 33 live foals. He’s also a three-quarter or half-brother to two very sharp Godolphin raced Group winning 2-year-olds in the form of Montsegur (by New Approach (Ire)) and Tessera (by Medaglia D’Oro (USA)).