A Perth horse beat Mystic Journey at Flemington on Saturday but it was certainly not the Perth horse that many believed could push the Tasmanian champion.

In fact, the horse that won Saturday’s G1 Makybe Diva Stakes (1600m) was once so absent-minded and so clumsy that connections had to make a Darth Vadar-like helmet for him whenever he travelled because he’s be forever knocking his head.

But those embarrassing days are over as Perth’s new star Gatting made an explosive start to his first eastern state campaign when he withstood Mystic Journey’s finishing burst to score at the odds of $101. 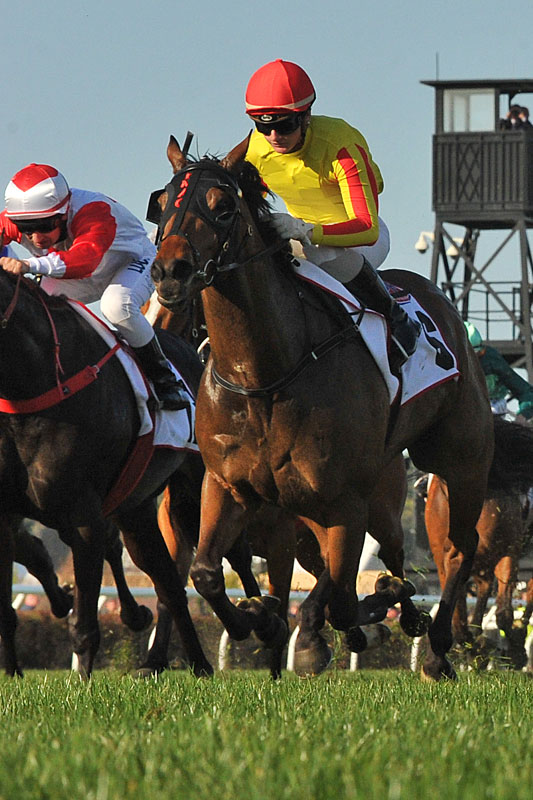 The win threw an invisible veil of silence over Flemington as so many had come to see Mystic Journey register an eighth consecutive victory and by doing so, confirm her status as Cox Plate favourite.

Trainer Darren McAuliffe was silent also mainly because nothing would come out of his mouth for the first few moments on entering the stunned mounting yard. A $101 group 1 winner can do that.

"A little bit lost I guess," was all he could manage for a few moments.

There will be no $101 on offer for Gatting in the Cox Plate next month however as BetEasy slashed his price from $61 to $17 following the boilover win while Mystic Journey drifted half a point to $5.

Jockey Jamie Kah is now making a habit out of longshot Group 1 wins after landing her first such victory in March in the Australian Cup aboard $31 shot Harlem.

"They look like Kingston Town colours but they have been in my family for many, many years," McAuliffe explained.

"It has been an average start to the season by our standards but we’ve got a lot of faith in this horse.’’

Before Gatting gets to the Cox Plate, he will be given two more Group 1 opportunities in the Underwood Stakes (1800m) and Caulfield Stakes (2000m).

Mystic Journey ($2.05) lost few followers with her performance as she suffered a tough trip after being caught wide.

The Perth horse that many believed could push Mystic Journey was Scales Of Justice ($4) but he could not repeat his Memsie Stakes performance and faded late to finish fifth after racing on the pace. 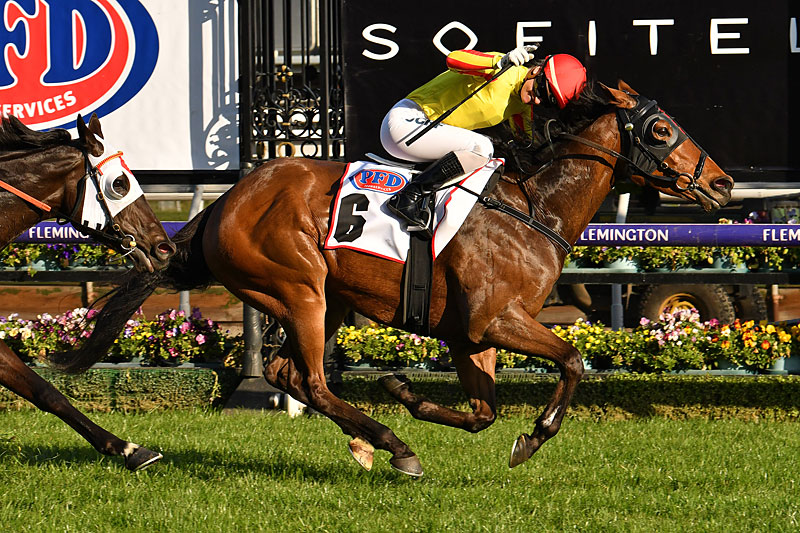 Anthony Darmanin – Mystic Journey (2nd): “She was very brave. I had a lovely run and I thought I had the winner beaten but he quickened really well and was too good on the day. With the month between runs she was a bit above herself. She was bouncy in the yard and behind the gates she was a bit aggressive. In the run she was very kind but with the month between runs I think she just needed today’s run under her belt.”

John Allen – Mr Quickie (3rd): “It was a huge run. We got back in the field and I had to wait for a run in the straight but when he got out he really he really did let down well and hit the line well. It was a huge run first up and hopefully he can go on to something a bit better.”

Craig Williams – Hartnell (4th): “I was so pleased with his performance. We had a sticky barrier draw before the race and I had an open book with how to ride him. Luckily he didn’t want to go forward so we got a really good run three-wide with a cart into it but when we straightened up we ended up being four or five lengths off the favourite. He really closed off well and is going super the horse.”

Dean Yendall – Scales Of Justice (5th): “It was an honest effort. I had a nice run in transit and he travelled well. I thought he was the winner a long way out but he probably just didn’t stick out the mile (1600m).”

Ben Allen – Fifty Stars (6th): “He stumbled coming out of the gates so I was that little bit further back than I wanted to be. I’d like to see him back into a handicap with a bit of weight relief.”

Mark Zahra – Kings Will Dream (8th): “He was a pass mark. I think he’s a horse that’s wanting a bit further in trip.”

Damian Lane – Humidor (10th): “He travelled better in the run today but it’s part of the race between the 600-400 that they just leave him a bit flat-footed but he closed well late.”

Mick Dee – Oohood (11th): “She pulled too hard throughout the run. Maybe with blinkers off she’ll relax a bit better and hopefully hit the line.”

Ben Melham – Yucatan (12th): “The ground firmed up a little bit which probably wasn’t really to his liking. I thought he ran well enough for a horse that wants further.”

Jamie Mott – Sound (14th): “First up today it was too short for him but he felt really good.”

Luke Nolen – Qafila (15th): “Obviously we were three-deep and she just compounded. She ran very well first up and that was probably a bit of a flat run second up. She hasn’t come right through in the coat yet so there’s improvement to come. Put a line through today and hopefully she bounces back.”

BOIL OVER AT FLEMINGTON