The new Shane Baertschiger-Mohd Zaki partnership gained further traction after Galaxy Star stormed to the front shortly after the start to never relinquish that advantage at Kranji on Saturday.

Regarded for many years as that journeyman who struggles to get the pick of the rides at Kranji, the nonetheless hard-working Zaki was rewarded for his never-say-die attitude when, by a stroke of luck, he became the recipient of the winning ride on Baertschiger’s Nepean after jockey Matthew Kellady was stood down in last year’s Group 2 EW Barker Trophy (1400m) on November 15.

While there was a belief it would be just a shooting star with no tomorrow for the Malaysian, who turns 41 in nine days, an offer from the Australian trainer to work full-time for him soon landed on his lap, turning out to be the career upgrade he had almost given up on. 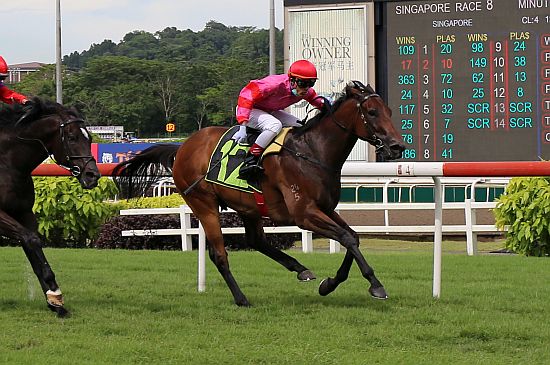 Zaki was of course sad to clear his locker at the Hideyuki Takaoka yard after taking root there for so many years since moving across the Causeway as a young wide-eyed apprentice jockey from Kelantan, the cradle of many of our local jockeys, but with better opportunities awaiting him at Baertschiger, it was time to open a new chapter.

This year alone, the upward change in fortunes was visible with three winners already under the belt, all for Baertschiger, just one shy of his grand total of four in 2020, with 4-1 chance Galaxy Star’s all-the-way win in Saturday’s $50,000 Class 4 Division 1 race over 1200m the latest feather to the budding association’s cap.

And not departing from a winning formula, Zaki, who has over the years built up a reputation as a rider of frontrunners, just like he did on Longhu and Maceo (albeit up with the pace in second place), he punched Galaxy Star to the front en route to that third hurrah.

Valorous (Marc Lerner) came chipping away at the margin but could only put an indent up to three-quarter length while Baertschiger’s second runner Summer Wind (Danny Beasley) took third place 3 ½ lengths away.

“It’s good for Zaki. He works full-time for me now, and he has been working so hard for us in the mornings, he deserves every success that comes his way,” said Baertschiger.

“When this horse (Galaxy Star) went forward, I thought he would stop as he is usually ridden quieter, but I was surprised to see him go all the way.

“Zaki rated him nicely, but he was also down in the weights and was back on turf.”

As is his usual style, a grateful Zaki reiterated his thanks to all the entourage behind the win.

“I’m very happy I won. Thank you to the boss, the owner (Ronaldo Stable), the stable staff and also Matt Kellady for all his help,” said Zaki.

“The instructions were to jump and try to go forward and try my best in the home straight. It’s worked out well.”

In 17 starts, Galaxy Star, a five-year-old son of Fastnet Rock, has now recorded two wins, one second and two thirds for stakes earnings around the $85,000 mark for the Ronaldo Stable.