Philosopher scored a narrow win on debut at Caulfield on 8 January over 1000 metres and while the Group 1 Blue Diamond Stakes (1200m) is the main aim in little over a month, the colt by Zoustar is the even-money favourite for the Listed Blue Diamond Preview (1000m) for colts and geldings at Caulfield on Wednesday.

That two-year-old race earlier this month is likely to be focal point race towards the Blue Diamond Previews on Australia Day as Philosopher — to be ridden again by Damien Oliver — holds favouritism for the colts’ division, and second-placed Jewellery is favourite for the fillies’ division. 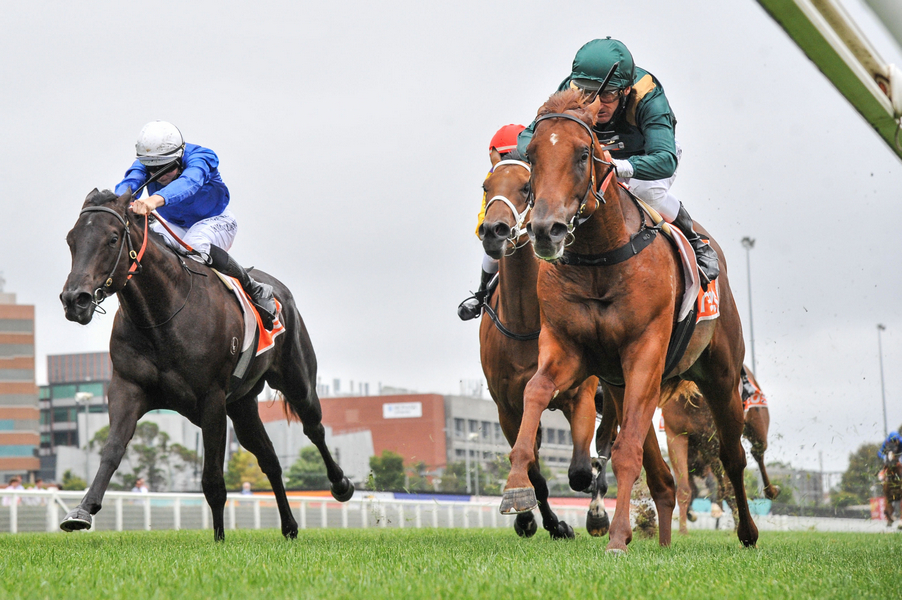 Philosopher won at his only previous outing, picture Racing Photos

Co-trainer Sam Freedman has high hopes for Philosopher but foreshadows questions still to be answered about getting to the 1200 metres of the 26 February final.

“We think he has improved,” Freedman told RSN. “He had a very good blow after his debut run and he’s tightened up a little bit from it.

“For a horse like him that does it at both ends and held them off, he was probably out on his feet for the last 50 metres there. Having had the run, the experience and having been to Caulfield, I think it maps for a better performance.”

Philosopher is at $8 for the Blue Diamond Stakes with Jacquinot, trained by Mick Price & Michael Kent Jnr, the $5 favourite.

“1200 metres is probably the query but he relaxes very well and paces himself well in front,” Freedman adds. “Tomorrow probably won’t tell us a lot more about getting to the 1200.”

While unsure whether Philosopher would have a race day start again before the Blue Diamond, the stable is realistic with what they are dealing with.

“You know what two-year-olds are like, they’re here and then they’re not,” Freedman quipped. “We’ve been massaging him through and hope that he keeps improving.”

Either way, experience around Caufield is key and Freedman isn’t concerned by the lack of ‘Sydney talent’ yet to make their appearances in Melbourne.

“We like to give them as many looks at Caulfield as we can, and getting to a Blue Diamond it can only really be of benefit for them,” he said.

For Godolphin, the Freedman stable will debut Daumier in the same event, and Bistro in the fillies division.

“We generally don’t love running our two-year-olds against each other, and we try and separate them where possible, but this just looked like the race to have him in for the experience.”

Bistro headlines their two-pronged attack in the fillies’ event, but despite winning on debut at Sandown on 8 December, Freedman is still keen to see more and is yet to be drawn too far on making comparisons with Philosopher.

“They’re different horses,” he said. “Philosopher is very fast while Bistro led up at Sandown, but I don’t think she’ll have the speed to lead them up tomorrow, which is a good thing.

“We do want to see her ridden with a sit but we rarely judge them on one run and like to see them do it again.

“It was a very small field at Sandown and they went very slowly. She was probably entitled to win given the run that she had in front. She looked lost there as she’d never led up a gallop let alone a race.”

Bistro is rated at $7 with Ladbrokes for the Blue Diamond Preview for fillies.

“She jumped out really nicely at Werribee and she should just keep improving,” he added.