Freedman returns with a new Nationality

While the racing interruption has had a negative impact on most, it did have the reverse effect on some horses, for example, Nationality.

That is what trainer Lee Freedman said after the previous one-time winner emerged under a patient ride from A’Isisuhairi Kasim in the $70,000 Class 3 race over 1100m at the resumption of racing on Saturday.

Singapore’s 1,000-odd horse population could not race during the three-month enforced holiday brought about by the coronavirus, but to some horses, it turned out to be a blessing in disguise. 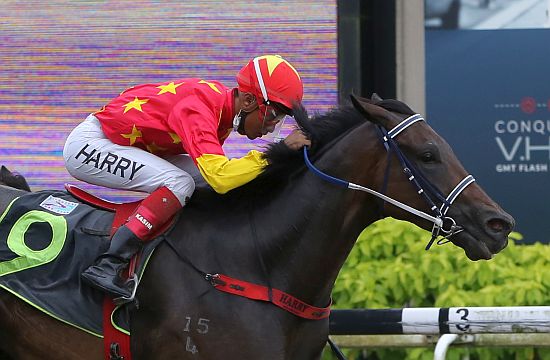 Especially to those who did not have things their way at the previous campaign, a much-needed break can revitalise a horse.

Buried away worse than midfield, Nationality was left alone by A’Isisuhairi until the last two furlongs when a few shakes of the reins spurred the Commands five-year-old towards a 1 ¼-length win from Ararat Lady (Ruan Maia). The winning time was 1min 5.28secs for the 1100m on the Polytrack.

Another encouraging run came from Autumn Rush (Simon Kok Wei Hoong), whose form had tapered off, but his flying third another length away suggests he is another to have taken no ill-effect from the break.

Sent at lukewarm odds of $61, Nationality was given just an outside chance against the likes of Coming Through, Ararat Lady and the much-vaunted newcomer Aramani, but from the way he put paid to them on Saturday, there is every reason to believe the China Horse Club-owned horse is poised to realise his full potential from now on.

Nationality has now taken his record to two wins and nine placings from 19 starts for more than $180,000 in prizemoney for the China Horse Club.

“Nationality is a good example of a horse who has benefitted from the long break,” said Freedman.

“He had a hectic first year and he never had a good break. Harry and I had a plan before the race and we wanted to back out of the speed.

“He used to be ridden with the speed in the past, and that has worked out well today. He travelled nicely at the rear, and that is probably the best way to ride him from now on, but that will also depend on the race.

“It’s been a long time for racing to restart, but it’s now time to win some races.”

Freedman’s wish came true with a second winner in $24 favourite Sun Chess (Vlad Duric) in the penultimate race of the bumper 14-race card, the $50,000 Class 4 Division 1 race over 1000m. It was a well-judged win from the three-time champion jockey who brought the Fighting Sun four-year-old with a well-timed run to beat Wonderful Knight (Chin Chee Seng) by half-a-length.