A vintage ride from top Australian jockey Craig Williams and plenty of room were the key ingredients to Mr Clint’s gallant win in the $1 million Group 1 Dester Singapore Gold (2000m) on Sunday.

Champion trainer Lee Freedman was certainly well inspired in flying in Australia’s current jockey with the Midas touch for the golden assignment. On Tuesday, Williams won the race that stops his nation, the Group 1 Lexus Melbourne Cup (3200m) with the Danny O’Brien-trained Vow And Declare at his 15th attempt.

Five days later, the 42-year-old Victorian rider was snaring a second Singapore Gold Cup, the island nation’s equivalent of the Melbourne Cup by virtue of its rich history as a handicap staying race, albeit its distance was shortened from 2200m to 2000m last year. 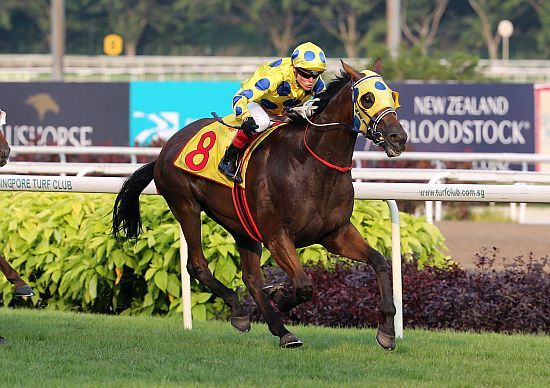 Williams captured Singapore’s time-honoured race for the first time in 2016 (when first sponsored by Dester beer) with the Stephen Gray-trained Bahana.

He later let in that not only Bahana’s win was a breakthrough moment in his stellar international riding career, but when Freedman rang him up for the Mr Clint ride, he had the Bahana blueprint and the confidence to accept the booking and even cancel a holiday trip.

Not to mention a bit of arm-twisting from his good friend Vlad Duric, who was aboard the favourite I’m Incredible, who ran ninth.

It was precisely in the second Leg of the Singapore Triple Crown series, of which the Singapore Gold Cup is the third Leg, the Group 1 Queen Elizabeth II Cup (1800m) that Mr Clint put in a “downer” which did cast some doubts about his chances, but Williams was quickly sold.

“I was actually in talks to ride Mr Clint in the second Leg, but they said they were committed to a jockey (Bernardo Pinheiro) which was fair enough,” said Williams.

“Then, Lee approached me for the ride in the Gold Cup. Lee was very confident he would run well even if his last run was so-so.

“Vlad also rang me up and told me he was a good chance even though he had the favourite. I was booked to fly to Hayman Island, but Vlad insisted and that’s how I got the ride.

“I have to say that I also took a lot of confidence from my first win on Bahana in the Gold Cup. Stephen Gray has become a very good friend of mine since, he and his owners are great people.

“I now have two wins from three rides in the Gold Cup. I finished out of the placings with the third (Sky Rocket, seventh last year), but this is special, and the jockey’s trophy is so big, we don’t get such big trophies for jockeys back home!”

There is little doubt Williams will place his second Singapore Gold Cup memento in close proximity with the first on his sideboard, though he can be forgiven if that recently held aloft silverware for the race every Australian jockey dreams of lifting is pushed a little more prominently forward.

“It’s quite something to come back and win the Gold Cup again, the same week I won the Melbourne Cup,” said the affable jockey.

“I grew up in a loving family, my parents, my two brothers have all helped in my upbringing. My father (former jockey-turned-trainer Allan Williams) was a jockey and he’s taught me everything I know.

“Lee was very confident with Mr Clint. He said he was going well, he was rock-hard fit and he didn’t tie me down to any instructions, he just told me this horse loves to have a lot of room.

“The race panned out as planned. I got a nice spot in midfield on the outside and I just let him roll forward from the back, he just outstayed them in the end.

“I’d like to thank Lee for the fantastic opportunity. His confidence convinced me to fly over and I owe it to him as he gave me many big-race winners in the past, but most significantly, my first Group 1 winner, Grand Echezeaux in the Australasian Oaks at Morphettville (in 2000).

“A big thank you to the owners (Oscar Racing Stable) for flying me up as it’s expensive. I’m also very fortunate to have my wife Larysa come up here from Australia, she’s my biggest supporter.”

Freedman, who was at his first Singapore Gold Cup success, said such a masterclass ride from a world-class jockey like Williams made all the difference when the stakes are higher.

“It’s been a good week, I was at the Melbourne Cup and saw Craig win and he’s now won the Gold Cup for me here. It’s most incredible,” said the 2018 Singapore champion trainer.

“Craig is an amazingly good jockey. He rode the perfect race, the way he is going, he could win the Arc de Triomphe!

“We go back a long way and I actually gave him his first Group 1 win in the Australasian Oaks with Grand Echezeaux, the dam of Darci Brahma.

“I always knew Mr Clint was a good horse. He had a good prep all the way through, and if he gets a soft run and can come out wide, I was confident he could win.” 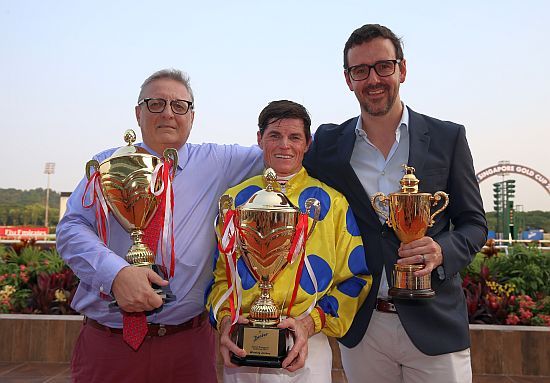 The Australian Hall of Fame trainer was spot-on in his race analysis. From barrier No 4, Williams had little trouble jockeying for the position that they wanted in the first half of the race, and the rest was poetry in motion.

Settling midfield in between runners, they kept close tabs on I’m Incredible on their inside while last year’s Gold Cup winner Elite Invincible (Juan Paul van der Merwe) led at a steady tempo after spearing over from his wide gate in a bid to replicate his winning effort from a year ago.

At the 800m, when Duric launched I’m Incredible on a searching run to take closer order and collar Elite Invincible at the top of the straight, Williams followed suit, tacking on Duric like his shadow. They had to course out even wider as they rolled forward, in the process keeping Sacred Croix (Benny Woodworth) tightened for room before the home turn, but the big strides were ominously fluent.

The Kranji crowd was up on their feet. The bunched-up field was packing up, but they had just witnessed the winning move in the all-yellow and blue spotted silks.

While a rails-hugging Williams had to use all of his guile to extract the best out of Vow And Declare to beat off a horde of international blue-blooded rivals in a driving blanket finish to the Lexus Melbourne Cup, he just had to nurse Mr Clint to the line once they hit the front in the last 400m of the Singapore Gold Cup.

Gold Strike (Barend Vorster) and Countofmontecristo (Daniel Moor) let down with the quickest sectionals inside the last 400m, but they had come from well back and as hard as they tried, Mr Clint had one furlong earlier stolen a march which proved unassailable in the end.

Clearly the real staying act in this year’s Singapore Gold Cup renewal, Mr Clint ($31) crossed the line first with three-quarter length to spare from the surprising Gold Strike with Countofmontecristo a gallant third another half-length away. The winning time was a moderate 2mins 1.02secs for the 2000m on the Short Course.

Another horse who deserved kudos for his run was longshot and Countofmontecristo’s stable companion Yabadabadoo (Wong Chin Chuen), who after bringing up the rear for most of the way, ground his way to fourth place another length away.

Other pass marks must also be handed to those who ran out of their skin to come up with meritorious close-up runs without winning.

They are Sacred Croix (fifth another head away), who took a bit of a check at the 650m when he tried to peel off runners for a his move, Real Success (Ben Thompson), Michael Clements’ third runner and who would certainly please the handler with his fighting sixth place another short head away, capping a remarkable performance for his trio, and last but not least, Bahana (Patrick Moloney), who despite being the veteran of the race at eight and needing a wet track to be at his best, pulled off an outstanding result to run seventh on a track rated as good, less than three lengths off Mr Clint.

The well-fancied King Louis (William Pike), a nose second to I’m Incredible in the QEII Cup, had excuses as he was cooped up on the rails for most of the way, paying the price inside the last 300m with nowhere to go. He ran eighth, at least turning the tables on I’m Incredible whom he beat by a head this time.

First Leg (Raffles Cup over the mile) Makanani (Marc Lerner) was prominent early but faded in the home straight to run a disappointing 12th for trainer Hideyuki Takaoka, who will have to wait another year in his bid to claim a fifth Singapore Gold Cup.

This year’s trophy was collected by John Laxon, the youngest of the four sons of nine-time Singapore champion trainer Laurie Laxon who bought the five-year-old son of Power at the New Zealand Ready-To-Run sale and even took him through his first paces at the barrier trials before handing him to Freedman when he retired in August 2017.

“Dad couldn’t make it for the Gold Cup. He’s out fishing back home in New Zealand,” said Laxon Jr.

“But I’m sure he’d be thrilled with the news. He bought Mr Clint himself as a two-year-old from the Karaka Ready-To-Run and shared him with Oscar Racing.

“Mr Clint has always been a genuine performer, and he gets better as it gets longer. We put a line through his last run as he doesn’t like to race on the inside of horses.

“When I saw Craig get him out and he started to roll out, I knew he would be running well today.”

The Singapore Gold Cup was the second Group 1 race Mr Clint was adding to his resume as he also claimed the Singapore Guineas (1600m) last year to give Freedman his first Group 1 hurrah in Singapore. He was incidentally ridden by another international Australian jockey in Hong Kong champion jockey Zac Purton.

With that fifth win from 23 starts, along with earnings from five seconds and three thirds, Mr Clint has seen his prizemoney snowball past the $1.8 million mark for the Oscar Racing Stable.