Cranbourne trainer Kasey Keys could not hide her delight after Free To Move scored a knock-out blow to punters at Flemington.

Free To Move provided Keys with her biggest win in racing when he took out the Listed AR Creswick Stakes (1200m) on Saturday.

Now in a training partnership with her father Ken, Keys Jnr was the one who picked out Free To Move with the intention of selling the youngster to Hong Kong.

But when no offers were forthcoming, Keys elected to race the now three-year-old herself with Saturday’s victory his third from 11 starts.

Providing Craig Newitt the second leg of a longshot Flemington double, Free To Move ($101) scored a half-neck win from Brenlyn’s Trooper ($81), with Capriccio ($21) a nose away third.

“I really liked him at the VOBIS Gold Sale and I originally picked him out with the intention of selling him to Hong Kong … when that didn’t happen, I was quite happy to stay with him,” Keys said.

Keys does not expect Free To Move to follow previous Creswick Stakes winners Nature Strip (2018) and Gytrash (2019), saying Listed grade was his level.

Newitt won the opening race on Saturday’s card, the Rod Johnson Handicap, on Celestial Fury ($26) and said Saturday’s results was down to his commitment to work hard.

“It’s all about opportunities,” Newitt said.

“This is the best book of rides I’ve had for a while now and to be able to get a couple of winners and still have a couple of chances to go, it’s a good day out.” 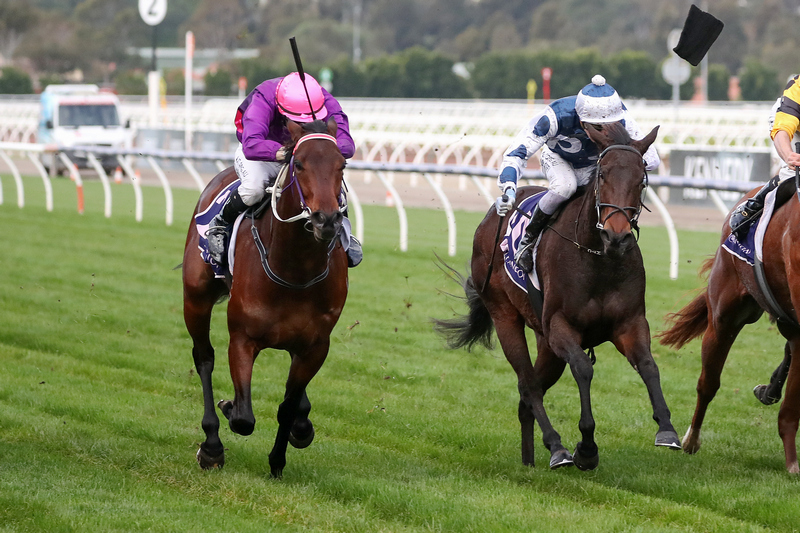 Craig Newitt sends Free To Move to the line down the middle on the track, picture Racing Photos