Frankie Lor’s following the successful path of past masters

Frankie Lor’s achievements in little more than two seasons as a trainer should not be undersold.

Yes, Hong Kong has a condensed pool of horses and trainers and he came into the role with vast experience but to claim an International Group 1 double and make a clean sweep of the Hong Kong’s Four-Year-Old Classic Series in his first two terms as a trainer would, I’d venture to suggest, be an unparalleled level of immediate training success anywhere in the racing world.

Not bad for the local boy who dreamed of being a jockey as he watched the races at Happy Valley, where he then lived, on television while his father, then a groom, was tending to renowned trainer Wong Tang-Ping’s horses at the city track.

That dream was achieved but certainly not with the notability that sees him now, as a trainer, successfully taking on the likes of John Size and John Moore - both of whom he worked for - despite being knocked back on his first two training licence applications. Nobody questioned his resume but nervousness, it’s believed, may have derailed those applications at the interview stage.

So, what’s his story? Well, it’s a little difficult to get too much of that from the man himself. Not that he’s unfriendly or unhelpful, he’s just not overly expansive when answering questions. Perhaps that’s because they come not in his native language or it may be the influence of mentor Size whose media mantra would seem to be - “Of course I’ll talk…but not too much.”

“My style is very similar to him,” Lor happily conceded, this week, in reference to Size. In fairness, he was almost certainly referring to training style, rather than personality. And Size has frequently been quoted as to how delighted he’s been to see Lor’s success. “I might have taught him too well,” Size has said more than once.

“I’ve known Frankie from the time he worked for Manfred Man. He works hard, he’s very well liked and he’s done phenomenally well as a trainer, which didn’t surprise me,” he said. 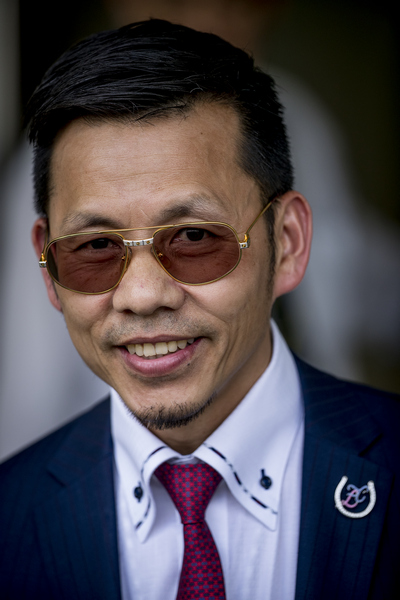 Karis Teetan rode the Lor-trained Mr Stunning in last year’s Hong Kong Sprint, a first International Group 1 win for each, and he also had little doubt that Lor would succeed as a trainer in his own right.

“I was riding for John (Size) and got to know Frankie then. He has always been this guy who was focused on his work and to get everything right, so once he got his licence I knew that he would do well.

“When he first started, people would ask me ‘what do you think of Frankie?’ and I said that once he gets a good horse, he will keep climbing. He’s a quiet type of guy. You see him with his son (Lok) and they’re doing their own thing. I think maybe he learned from John Size to avoid the spotlight.

“He’s great to deal with as a jockey. If I ride a horse for him and come back and tell him something, he listens. He won’t hesitate to try something if I say maybe this horse needs a change of gear or a step up in distance. He’s always willing to take your advice but if he thinks it’s a bad idea, he will tell you too. It’s really nice to ride for him,” Teetan said.

On a lighter note, Teetan said of their Group 1 success: “It was pretty cool to win his first International Group 1, but one hour later he wins another one so then I think he’s forgotten about me,” he said.

Teetan is appreciative of the support he’s had from Lor. “I’ve ridden a lot of winners for him and he’s always supporting me when he can. He’s always a cool guy. He reminds me of a junior John Size, they never get upset. Even John, if you make a mistake he doesn't shout at you and Frankie is similar, he will just try to talk to you, he won’t be rude and that’s one of the good things about Frankie,” he said.

Lor, himself, concedes his success has been something of a surprise. “Yes, I can’t believe that I can do it. For a new trainer, winning Group 1 races is not something you expect. And winning the classic series races, you’ve got to get the right horses and I’ve been lucky in that way.

“For me, I’m still learning, this is only my third season and you’re always thinking about new things and how you can do better and planning for the next 12 months or two years. I think all trainers says they keep learning all the time.

“I got my licence maybe a little bit late but the upside is I guess that I had more experience, working for different trainers. The last one was Mr Size and he gave me a lot of support. I learned a lot of things from him and you can see that my style is very similar to him,” Lor said.

There is a genuine bond between the two men and one which was not eroded by Lor claiming that first Group 1 success with a horse who was previously trained by Size.

Lor was Size’s assistant trainer for four years, but his racing career began in 1981 when he entered the Hong Kong Jockey Club Apprentice Jockeys’ School. He rode 27 winners between that year and 1995.

“I did dream of being a jockey,” he said, “I didn’t go to the races with my father but he worked as a groom and so did my brother so I knew about the horses and the races and watched them on TV,” he said. His brother, Law Fu Man, works for the stable in Conghua.

“I remember dad worked for Wong Tang-Ping who was a big trainer and I remember dad being one of the first ones to move out to Sha Tin when training moved to there, in 1978, I think,” he said. Wong, whom Douglas Whyte credits for much of his early success, rose from the ranks of riding boys and thus his story is not dissimilar to that or Lor’s.

Wong trained Co-Tack, the most celebrated of horses in Hong Kong before the turn of the millennium. His 1983 Hong Kong Derby win was one of 10 consecutive victories, with Tony Cruz in the saddle, in 1982-83.

Lor’s first win, as a trainer, came with his first runner, Yourthewonforme at the season opener on 3 September, 2017 and he ended that debut campaign second in the premiership behind his old master Size. His tally of 65 wins surpassed Hong Kong's previous best first-season total, set by Size when winning his first Hong Kong trainers' championship in 2002.

His subsequent major race success would smack of instant or overnight sensation but for the 20-year apprenticeship he served.

Nevertheless, his success is a great story and one of local lad “makes good” which is important to Hong Kong racing as Bill Nader, Director of Racing Business and Operations, observed on the eve of Sunday’s LONGINES Hong Kong International Races.

“His success is significant as he’s a product of the system. He came up through the Jockey Club apprentice jockeys’ school, rode as a jockey and then worked for many years for John Moore and John Size and others before he went out on his own and had great success so early, especially on the big stage, which is a big achievement for him and our processes.

“It’s been appreciated, I’m sure, by the Hong Kong public as this was one of their own showing that the Hong Kong International Races don’t just belong to the big and well-established guys, whether they be based here or from overseas, but there is also Hong Kong talent who can really excel straight away,” Nader said.