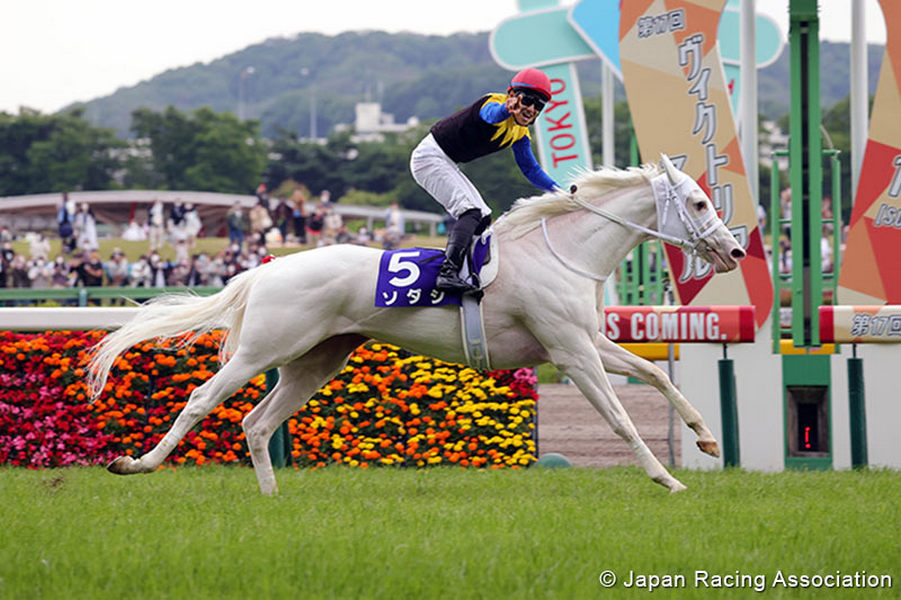 The 2021 Best Three-Year-Old Filly, who came off a third in her second dirt start, the February Stakes (G1, dirt, 1,600m), has claimed all her four starts on turf over a mile distance.

Breaking sharply from stall five, four-year-old Sodashi traveled by the rails in fourth and steered slightly to the outside entering the lane to make bid. The Kurofune filly broke loose from the pack passing the
200-meter pole, promptly overtook the frontrunner and pulled away with an impressive late drive for a two-length victory.

“The filly was relaxed and in good condition when I rode her in the post parade. Once she entered the gate, she was focused and was able to make a good break and I was able to ride her in good rhythm while
holding down her pace. She responded well at the stretch and when I urged her to go. As today’s race included a very strong field, it was like a dream for a white horse to be able to win a G1 race at Tokyo
Racecourse,” commented Hayato Yoshida.

Third choice Fine Rouge sat three-wide in around sixth and while struggling to find a clear path at the early stretch, showed a persistent turn of foot to close in on the winner, passing her rivals one by one.
Though unable to catch up with Sodashi, the Kizuna filly won out a four-horse rally to secure a runner-up seat by a neck.

Sixth pick Resistencia rallied to take the lead but eased back to second to let Rosa Noir set the pace. Angling out slightly entering the stretch, the Daiwa Major mare ran strongly to nose out the tenacious pacesetter just before the wire but was outrun by fast-closing Fine Rouge to finish third.

Race favourite Lei Papale broke smoothly and settled third from the front. Though entering the homestretch in good striking position, the Deep Impact mare was unable to show her usual late kick and faded to 12th.