Triple Nine, a record-breaking four-time President’s Cup winner and Korea’s all-time leading money earner, has been retired. The eight-year-old last ran in the Herald Business Cup in June and with racing in Korea on another indefinite hiatus, the decision was taken to retire him.

With fifteen wins from thirty-three starts in Korea and 4.7 Billion Won (US$4Million) in prize money, Triple Nine retires as one of the most successful and significant horses in local racing history. He won five Korean Group 1 races, including an unprecedented four consecutive Presidents Cups from 2015 to 2018 as well as the Grand Prix Stakes in 2018.

Bred by Isidore Farm on Jeju Island, and placed by owner Choi Byung-bu with trainer Kim Young-kwan at Busan, Triple Nine ran 2nd on debut as a juvenile in late November of 2014. He then won four in a row before being beaten by Yeongcheon Ace in the Korean Derby the following May. He would finish runner-up again in the final leg of that year’s Triple Crown with stablemate Rock Band besting him in the Minister’s Cup.

There weren’t many more setbacks. In October of 2015, Triple Nine turned the tables on Rock Band to secure his first President’s Cup, a race he would go on to make his own. In the 2016 edition he defeated another stablemate, the Triple Crown winner Power Blade before equaling Dangdae Bulpae’s feat of three wins in the race in 2017 with Power Blade once more coming home in 2nd place. A year later he came from off the pace to score his historic fourth win in what is, Derby aside, the richest race restricted to Korean bred horses. 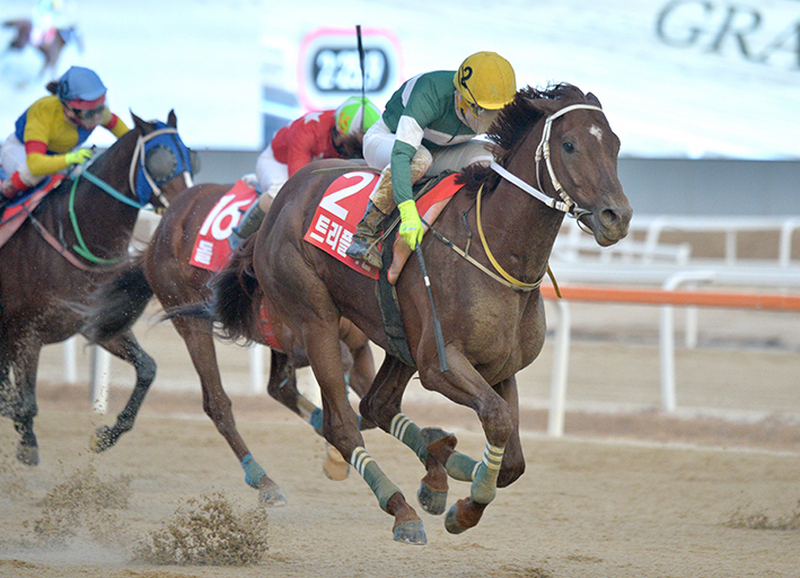 Triple Nine didn’t only run well against his fellow Korean-bred horses though. He finished in 3rd place behind the Japan-trained pair of Chrysolite and Kurino Star O in the inaugural Korea Cup in 2016 and was again the best of the locally-trained runners in the international race the following year when 4th to London Town.

In early 2017, Triple Nine joined Power Blade in travelling to the Dubai World Cup Carnival. His 2nd place on his Meydan debut coupled with a 4th and a 5th in Group company earned him a spot in the Godolphin Mile. While that was a race too far, he had proved he could hold his own internationally, a precursor of what was to come from Korea-trained horses both in Dubai and at the Breeders’ Cup in subsequent years.

Across his career, Triple Nine also picked up victories in the Gyeongnam Ilbo and Busan Owners’ Cups but the one that seemed destined to elude him was the Grand Prix Stakes, the traditional season-ending finale in December. He finished 4th in 2015, 2nd in 2016 and 3rd in 2017. Finally in 2018, he got it right, overhauling Cheongdam Dokki and Today in the closing stages to claim victory at the fourth time of asking. Future stars Dolkong and Moonhak Chief were 4th and 6th.

That would ultimately prove to be his final victory. Injury kept him out for the entire 2019 season and while he reappeared earlier this year to run a creditable 3rd in what was intended as a tune-up race before targeting the Stayer Series and potentially a fifth President’s Cup, racing’s enforced shutdown intervened. His 8th place in the Herald Business behind Cheongdam Dokki in June and then the second shutdown meant that Triple Nine’s racing days were over.

“Triple Nine has had a huge influence on my life” said owner Choi Byung-bu. “He is like a child to me and I am sorry he can’t end his career in a flashy way. I would like to express my gratitude to all those who have supported Triple Nine”.

That “flashy way” would have been an official retirement ceremony on a Sunday afternoon during racing at Busan Racecourse that as a Group 1 winner, Triple Nine would have been entitled to. Instead he quietly exits the scene, initially to Challenger Farm, which is also home to imported stallion Cowboy Cal.