John Sargent’s Four Moves Ahead under Nash Rawiller claimed her second Group 2 victory at Randwick when the Snitzel filly won the $200,000, Darley Tea Rose Stakes (1400m) on Saturday, the third leg of the Sydney Princess Series, turning the tables on rival Swift Witness who took the first leg.

Back  on August 21st Swift Witness and Tim Clark had won the Group 2 Silver Shadow Stakes over 1200m over Latino Blend (NZ) and Four Moves Ahead, the margin 3/4L. On Saturday the margin was less, a neck and a head, but Four Moves Ahead had the advantage with Mallory and Jason Collett third until a subsequent protest then overturned the placings with Mallory promoted to second and Swift Witness third.

The race was essentially about the first three home. Rocklily and King led from the barriers  with Four Moves Ahead and Rawiller behind and outside after leaving from barrier nine. Swift Witness and Clark were initially third until Clark went forward at the 800m to track the leader.

Crossing the 300m Rocklily faded and Clark sent Swift Witness to the lead with Mallory and Collett chasing on the inside and Four Moves Ahead and Rawiller outside. It then it was a stride for stride to the line as they left the rest of the field behind. Rawiller, in rampant form with two earlier winners on the programme and a later win with Eduardo, lifted his filly and she responded with 50m to run to overcome the fillies inside her for the win.

Mallory (Not A Single Doubt) and Collett were a neck ahead of Swift Witness (Star Witness) and Clark with Von Trapp fourth a distant 1 3/4L away, Chill fifth and Latino Blend (NZ) sixth. 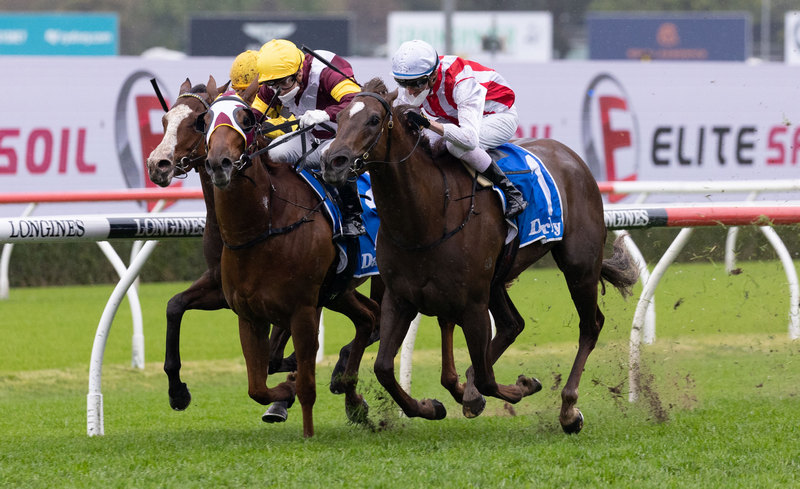 Four Moves Ahead and Nash Rawiller with Swift Witness and Tim Clark inside and Mallory and Jason Collett on the rails, picture Sportpix.com.au

“That’s his third today and I just left it up to him. When I walked out in the rain to talk to him to tell him what to do he said I will ride her very similar to how I rode her in the Slipper. He did and this rain helps her. I think she is on an upward plane and peaking for the Flight Stakes,” said Sargent.

“He knows her well. She has a good turn of foot. You do not need to take off too early at Randwick. I was very happy with that. It is good to see her back in form. Onwards and upwards from now.

“Just this week her coat finally came out. It has taken a bit longer. The couple of runs have not all gone her way but not making excuses. Onwards and upwards now with two weeks to go to the Flight and that is the one we are after because it is a Group 1.

“Emeralds is her half-sister and she won at a mile in the Angst, a Group 2 race so the mile shouldn’t worry her at all. She is very competitive when Swift Witness came around her, she wanted to go then. Nash knows her, hold her back and wait,” he said

“Well this is just when you get to know a horse, you know what she is capable of, her idiosyncrasies, probably the way we rode her the other day has helped her win today’s race. I was going to end up in no man’s land last time but was forced to go back with cover and switch her off. Her run still held, she still hit the line. I couldn’t have come out and rode her as confidently as I did today,” said Rawiller.

“She loves this ground. When Swift Witness kicked again at the 150m I was a little concerned but with that bit more sting out of the ground she really dug deep. She is a very good filly and Sarg has done a great job with her and let me do what I felt I needed to do on her towards the Flight Stakes. I said when I got off her the other day I thought she would be favourite for the Flight and still think she will,” he said.

Four Moves Ahead, out of the Mr Greeley mare Doulmera, won the Group 2 Sweet Embrace Stakes over 1200m at the track back in February and went forward to placed fourth in the Group 1 Golden Slipper. Raced by Jonathan Muntz’s Pinecliff Racing the valuable filly has now earned stakes of $540,200 from her three wins, one third and the fourth. 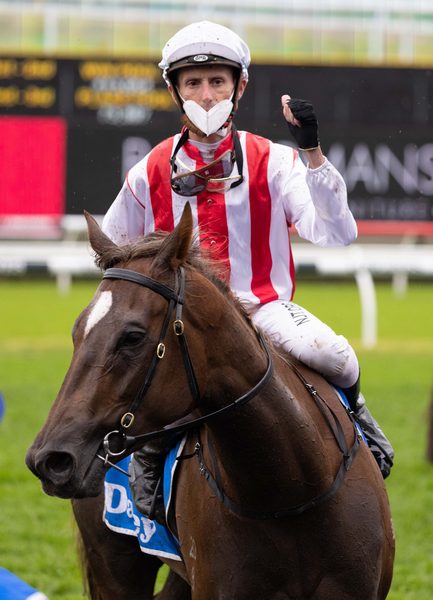 The third winner of the programme for Rawiller, picture Sportpix.com.au

Tim Clark (Swift Witness): “She ran great. On track for the Flight Stakes in a couple of weeks.”

Sam Clipperton (Robodira): “The barrier made our job very difficult.”

Kerrin McEvoy (Latino Blend): “Pace just didn’t suit. She sort of got back and ran on into it. Levelled the last furlong. Not sure that she loved that ground.”

Regan Bayliss (Never Been Kissed): “She will run a mile that is for sure. She just got caught wide today, kept her balance, she lacked a turn of foot but kept sticking on right the way to the line.”

Josh Parr (Von Trapp): “Fantastic effort. Had to ride her quiet from the gate. Lovely filly.”

Brock Ryan (Mokulua): “She ran well but she didn’t like the track.”

🚨 PROTEST UPHELD - third against second in the Tea Rose Stakes.