Fitzsimmons has high hopes for Golden One

A set of blinkers went a long way in unlocking the winning potential of Golden One at Kranji on Saturday.

The Better Than Ready three-year-old had settled too far back at his first three runs, not to mention he met with traffic problems of various kinds.

At his last start, he was hitting top gear in the home straight but he copped a bad check at the 100m, and the race was over for him. 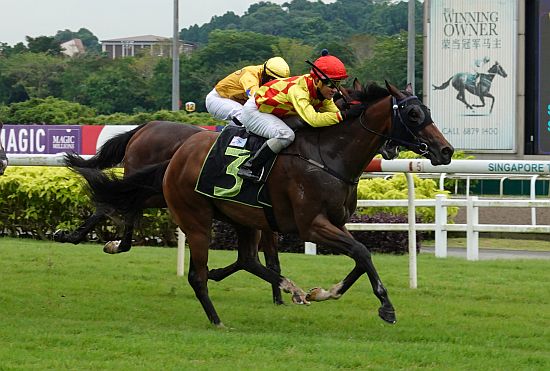 He was a lot closer to the pace under first-time partner Wong Chin Chuen this time, and once he collared favourite Lim’s Dreamwalker (Simon Kok Wei Hoong) at the 300m, that maiden win for the Gold Stable-owned galloper became a foregone conclusion.

Golden One kept on to go and post a one-length win from Real Efecto (John Sundradas), who though headed after showing the way throughout, regained the ascendancy to take second place.

Lim’s Dreamwalker again proved green when he hit the front. He did not dump his rider like at his last time when he could not keep it together inside the last 100m, but he again dropped his focus when he had everything going his way, eventually conceding third place to Golden Sprint (Ryan Munger) by 1 ¾ lengths.

“He was very unlucky at his runs. At his last start, he was wiped off in the straight, Harry (A’Isisuhairi Kasim) said he would have run second,” said the Australian handler.

“I was worried something would happen again when he came on the outside of Lim’s Dreamwalker, but it was all good.

“This horse wants 1600m. The blinkers helped him travel closer while he was right at the back before.

“I told CC to just be patient and get off the fence and it’s paid off. I was really confident of a good run today.

“It’s a shame Marc Lerner could not ride him as he’s done all the work on him. When the weights came out (52.5kgs) I had to get CC instead.

“It’s great for the Gold Stable. This is the first horse I bought at the sale, I got him at the Magic Millions Ready To Run sale last year.

“He’s a nice progressive horse who will get even better when he steps up in trip.”

Wong, who was bringing up his seventh win, and his fifth since returning from his lockdown in Johor Bahru, was delighted with the first winning combination with Fitzsimmons.

“I’d like to thank Tim for the very good opportunity, it’s my first winner with him,” said the former two-time Singapore champion apprentice jockey.

“I ride for Tim in the mornings and I galloped this horse before. He gave me a nice feeling.

“I saw Marc ride him with the blinkers on and he went really well. Tim told me not to go too far back and not use him too much and he will finish off strongly.

“He travelled good for me. I saved him for the last bit, and when I got him in the clear, he just kept going.”

With that account opener, Golden One has already earned close to $50,000 in stakes money, which is not too far off his price tag of A$85,000.