With a small team of only four runners at on Saturday, Tim Fitzsimmons had been keeping his fingers crossed for at least one winner for the perfect celebration of his son Julian’s second birthday, and the Australian trainer certainly got more than he had bargained for in the Kranji opener itself – Fireworks to go along!

Mildly supported at $40, Fireworks (who was at only his third start for Fitzsimmons after transferring from his former boss Cliff Brown) came off a cosy run in the box-seat right on the hammer of Billy Elliot (Vlad Duric) in the $30,000 Class 5 race over 1400m to go and roll the hot favourite following a stirring tussle inside the last furlong.

An impressive winner on debut, Billy Elliot was thought by most pundits to be a near-certainty in Class 5 company, but the short-head defeat again proved that death and taxes are not about to admit a third member into their exclusive group anytime soon. 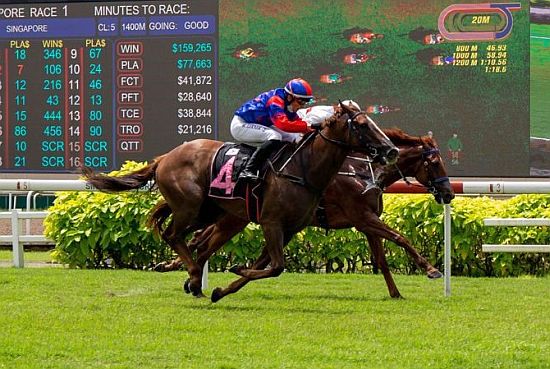 Fireworks (Marc Lerner) races past hotpot Billy Elliot (Vlad Duric) to get up in the opener, picture Singapore Turf Club

Admiral Winston (Jerlyn Seow Poh Hui) ran on for third another 1 ¾ lengths away. The winning time was 1min 22.74secs for the 1400m on the Long Course.

“It’s great to get a winner on my son Julian’s second birthday,” said Fitzsimmons, who has two other children JJ and Joyce with wife Joan.

“The last time this horse won, he had 55kgs on his back. With 59kgs today, I was a little bit worried even if he was down in grade.

“Marc (Lerner) rode a patient race on him, and he also did well to give up the lead, and sit behind the leader (Zygarde).

“We thought the favourite was underclass in this race, but when I saw Marc and Vlad, the two sluggers fighting it out, I knew we had a good chance. It was a good tough win.”

Lerner, who was joined by the four-time Singapore champion jockey at the top of the ladder following his five-timer last Saturday, certainly earned every cent of his riding fee to gain the win – and the outright lead on Duric (16 versus 15 winners).

“I thought he had a better chance in Class 5,” said the French jockey.

“He had a lovely trip behind the speed. Vlad took us into the race very far, I just tracked him as long as I could, and the horse won a nice race.”

With that fourth win in 25 starts, Fireworks has bumped up his stakes earnings past the $80,000 mark for the Buffalo Stable.

Without taking anything away from the winner, the vet reports later revealed that Billy Elliot returned lame in the off foreleg.