A total of 82 locally-trained horses and 12 international raiders are first acceptances on Tuesday for the $8m, Group 1 160th Lexus Melbourne Cup (3200m) at Flemington on November 3rd.

The overall figure of 94 is well up on last year’s total of 80 and is the highest number of first acceptors since 2010, when the deadline closed three weeks earlier.

As a result of the additional restrictions imposed on travelling horses and their handlers due to the COVID-19 pandemic, the number of overseas competitors still committed to taking their place in the Melbourne Cup field is down slightly on an average of 16 over the past five years, but the quality remains exceptionally high.

Of the local trainers, Danny O’Brien would appear to hold the strongest hand with six horses amongst the first acceptances including impressive last-start winners Russian Camelot, Orderofthegarter and Saracen Knight and the reigning champion Vow And Declare, who is bidding to become the first Melbourne Cup winner to successfully defend their crown since Makybe Diva 15 years ago.

Russian Camelot is followed closely in the betting markets by Surprise Baby, who will put his Group 1 credentials on the line in the TAB Turnbull Stakes (2000m) at Flemington this Saturday. His potential opponents include Team Hawkes’ exciting prospect Master Of Wine, who is also amongst the first acceptors but is currently well down the updated Order of Entry and so may need to win on Saturday to ensure his starting berth in the Melbourne Cup. 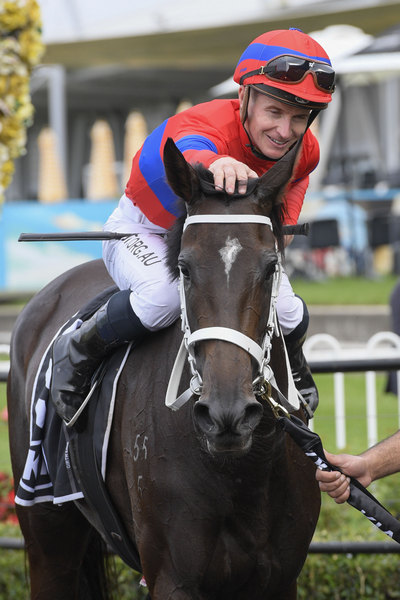 High-class mare Verry Elleegant, another Turnbull Stakes contender, is amongst nine first acceptors from Chris Waller’s stable, whilst the Anthony and Sam Freedman-trained Steel Prince will again attempt to win his way into the race through Saturday’s Group 3 The Bart Cummings (2500m), having won an exemption into the 2019 Cup via The Andrew Ramsden (2800m).

With an international rating of 121, Anthony Van Dyck is the headline act amongst the shipment of international horses due to land in Melbourne this Friday night (2 October). The 2019 English Derby winner, who defeated arguably the world’s best stayer Stradivarius on his last appearance, has been allocated the topweight of 58.5kg for both the Melbourne Cup and the Stella Artois Caulfield Cup (2400m), in which he will be ridden by Hugh Bowman.

His stablemate Santiago, set to be ridden by Irishman John Allen, is also amongst the first acceptors alongside another highly-progressive horse from Aidan O’Brien’s world-renowned Ballydoyle stable in Tiger Moth, who would give Kerrin McEvoy a third Melbourne Cup win if suuceesful. The pair were the first two home in this year’s Group 1 Irish Derby (2400m), with Santiago just getting the better of his stable companion in an epic duel.

O’Brien’s son, Joseph, is chasing a second Melbourne Cup triumph with a quartet of high-class gallopers in Twilight Payment, Buckhurst, Pondus and Master of Reality, who was demoted to fourth in the 2019 contest having originally crossed the line in second place under Frankie Dettori.

Renowned German trainer Andreas Wohler is also aiming to claim a second Melbourne Cup with his stayer Ashrun; whilst an elusive first win in the race for Irishman Willie Mullins is reliant on the performances of his mare True Self, a winner during last year’s Melbourne Cup Carnival, and her stablemate Stratum, who will race as Stratum Albion during his stint in Australia to avoid a name clash. Stratum Albion is owned by Tony Bloom, the chairman of English Premier League club Brighton and Hove Albion who sent Withhold to Australia two years ago.

The international contingent is completed by Charlie Fellowes’ gallant gelding Prince of Arran, who is set to line up in his third successive Melbourne Cup; and Andrew Balding’s Dashing Willoughby, who was recently acquired by prominent New Zealand owner Sir Owen Glenn under his Go Bloodstock banner.

Amongst the notable names to drop out at the first acceptances stage are James Cummings’ Australian Oaks (2400m) heroine Colette, Phillip Stokes’ Group 1 winner Mr Quickie and the Grant and Alana Williams-trained mare Arcadia Queen, who is heading towards the Ladbrokes Cox Plate (2040m) after finishing third behind Russian Camelot last week.

The O’Brien name is set to dominate this year’s Lexus Melbourne Cup, with Aidan, his son Joseph and Danny (no relation) training nine of the runners currently inside the top 24 of the updated Order of Entry released today also.

All three of Aidan O’Brien’s first acceptors are safely ensconced in the all-important top 24, with Anthony Van Dyck (second), Santiago (sixth) and Tiger Moth (10th) all bidding to give arguably the world’s leading trainer a first Melbourne Cup victory.

Of Joseph O’Brien’s quartet, only Pondus (52nd) is currently outside the top 24, with Master of Reality (eighth), Twilight Payment (ninth) and Buckhurst (15th) each guaranteed a run in the race.

Another Group 1-winning mare, Sydney Cup winner Etah James, is up to 23rd place, giving the in-form Ciaron Maher and David Eustace stable two chances to claim their first Melbourne Cup. The pair will also take charge of their new recruit Sir Dragonet (11th), who is set to arrive from the UK this Friday night.

An updated Order of Entry for the Caulfield Cup was also released today with Armory, one of four first acceptors from the Aidan O’Brien stable, currently occupying the 18th and final place in the field for the $5 million showpiece, which takes place at Caulfield on Saturday, 17 October.

Like his stablemate Orderofthegarter and the Mike Moroney-trained Aktau, Russian Camelot is now exempt from the ballot for the Stella Artois Caulfield Cup following his win in the Underwood Stakes; although with the Ladbrokes Cox Plate and the Lexus Melbourne Cup his intended targets, connections have advised the colt is unlikely to contest the world’s richest handicap over 2400m.

The movers in the Caulfield Cup Order of Entry are Friday night’s Group 3 JRA Cup (2040m) winner Al Galayel, who moves to 47th courtesy of a subsequent 1.5kg handicapping penalty; while 2018 ATC Derby winner Levendi moves to 40th having passed the ballot with his third placing in the same race.