The strength of Ben Foote's hand in next month's Gr.1 Barneswood Farm 48th New Zealand 1000 Guineas (1600m) at Riccarton will become clearer after racing this weekend.

"Babylon Berlin has shown she's up to it and the other filly is really progressive. I was looking at the Soliloquy for her too but the mile and the bigger track will suit her better down south. If she ran in the Soliloquy, she would have needed the right draw and everything to go right," Foote said.

A winner of three trials before racing, All Too Hard filly Babylon Berlin was a 4-1/2 length debut winner at Rotorua in August before two narrow defeats, finishing third in the Gr.3 Gold Trail Stakes (1200m) at Hastings by a neck and a head then second to Mega Bourbon by a head over 1200m at Te Rapa last start.

"On her work, she'll definitely run out a strong 1400m but we're a bit in the same boat as Travelling Light last year in that we'll have to get a bit of cover and the problem with that is she's lightning quick out of the gates," Foote said.

"We just want to see her take a sit as we work towards the 1600m at Riccarton. We drew the outside the other day at Te Rapa and couldn't get cover. She sat outside the leader and just got left in front a long way out, which wasn't ideal. She's just got to learn to run it right out."

Foote produced Travelling Light to win last year's Soliloquy Stakes but she was unable to lead throughout in the 1000 Guineas and was run down to finish third behind Loire and Jennifer Eccles.

He expected Babylon Berlin to give the stable a great chance of making it successive wins in the Soliloquy, a three-year-old fillies race normally run at Ellerslie.

"I don't have any doubts that she'll be right there. Just the run in the race will determine whether she's one, two or three," he said.

Foote believes she is more a staying type than her El Roca-sired sibling.

"She's big and strong and a really good doer, just not quite as natural as Travelling Light was," Foote said.

"She's so laidback so she's taken a bit of work to sharpen her up. We want to make the 1000 Guineas field if she's up to it so she's going to have to go super-well on Saturday and run in the first three.

"If she's not up to it, we'd go home and get her ready for summer and autumn racing but I really think she will measure up and the mile is her go. She's drawn out a bit but at Riccarton it's not going to make too much difference over a mile. Hopefully Terry (Moseley, jockey) can position up midfield or better and she gets home well from there.

"We're hoping she's an Oaks filly. After Riccarton, we'll get her back home and look at races like the Eight Carat Classic (Gr.2, 1600m) and Royal Stakes (Gr.2, 2000m) at Ellerslie after Christmas then build her up from there."

While the two fillies are Foote's only runners on Saturday, he has been far from idle, preparing nine youngsters for the New Zealand Bloodstock Ready To Run Sale.

"They all breezed up really well and in good times. We had a couple run the quickest times without any real pressure on them," said Foote, whose horses mainly sell under the Riversley Park banner. 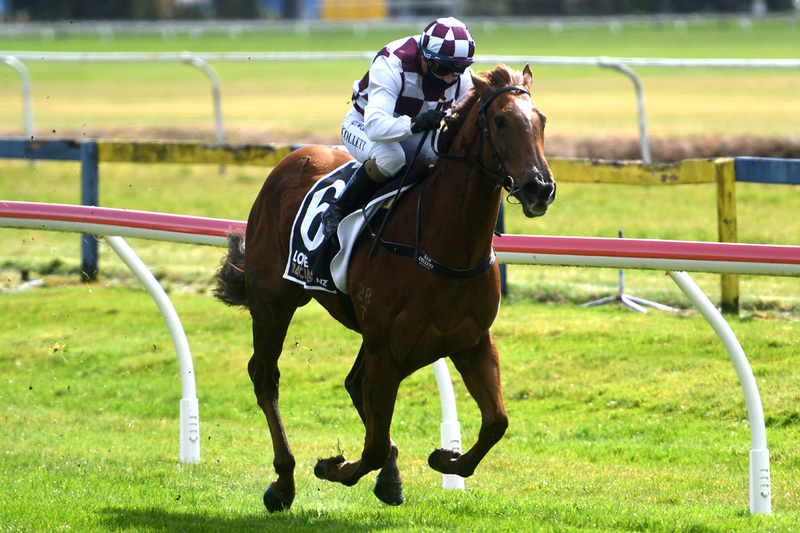 Coventina Bay’s picket fence form line may have been disrupted with a first-up fourth-placing at Te Rapa earlier this month, but trainer Robbie Patterson believes she can return to her winning ways at the Hamilton track this weekend.

The five-year-old mare will contest the Beefeater Garden Bar 12/12 1400 and Patterson said she will appreciate the step-up in distance.

“Only In Jakarta got away with soft sectionals in the front (last start), which made it impossible for us to pick her up,” Patterson said. “But it was a top run, she found the line strong. She’s not a 1200m horse so I took a few positives out of it.

“She has thrived since last start. She has actually put on a bit of weight, she got away on me a fraction. She has worked up well and I expect a good run.”

The daughter of Shamexpress strung together four wins last preparation and Patterson put that form down to a successful operation.

“She had a back operation and she has improved from what she was and has matured a lot mentally,” he said.

“She has got some big assignments,” Patterson said. “She will go to Counties for the Group Two fillies and mares 1400m.”

Coventina Bay will be joined on Saturday by stablemate Lady Rudolph.

“She has had a couple of trials and jumpouts and she has been going really well in those,” Patterson said.

“She is going to get back from the draw (11) but she will definitely be flying home at the finish, which she always does. Her chances will be tempo related.

“She will go to a mile in two weeks back at Te Rapa and then she might head to the Wanganui Cup, 2000m will be her forte.”

Meanwhile, Patterson is looking forward to having a strong representation at his home meeting at New Plymouth on Friday.

Patterson is looking forward to lining up a couple of debutants in Puntura and Neildini, but said Dezella, Regal Ruby and Bold Bette are his leading lights on Friday.

“Puntura is a Vespa but he is a big staying type of horse, I quite like him,” Patterson said. “He is going to turn into a really nice horse, in time. Neildini has to put his hand up and prove himself.

“Bold Bette in race one is a horse I really like. She is a three-year-old staying filly and I can see her winning a nice fillies race later this season if she keeps on improving the way she is.

“Dezella is flying at the moment. I gave her a first-up run at Waikato over a mile, she was only there for a run.

“She acquitted herself well and has come along in leaps and bounds. She is carrying a little bit of weight (58.5kg) but she is the class horse of the field, I feel. She is thriving at the moment and I can see her going really well.”

While he believes Bold Bette and Regal Ruby are leading chances in their respective races, he highlighted Regal Ruby as his stable’s best chance of the day in the Taranaki Associated Cleaners Maiden (1100m).

“Regal Ruby is my best bet of the day,” he said. “She is out of a Group Three-winning mare that I trained and she is a lovely filly.

“She will end up in some fillies races this season, but 1100m is a fraction short of her best, but I can imagine her being right in the thick of it.”

Three-year-old filly Tokorangi will sport different colours when she steps out in the Gr.3 Waikato Stud Soliloquy Stakes (1400m) at Te Rapa on Saturday for trainers Michael Moroney and Pam Gerard.

Australian owner Ozzie Kheir has bought into the smart Redwood filly, who came from well back in the Gr.3 Hawke's Bay Breeders’ Gold Trail Stakes (1400m) to finish a luckless fourth, deprived of racing room in the concluding stages.

Jockey Michael McNab will have his second ride on the filly on Saturday and Gerard believes he will have a greater understanding of Tokorangi’s quirks after being a late replacement for rider Cameron Lammas at Hawke’s Bay.

“I am really happy with her,” she said.

“Obviously it was Michael’s first time on her last start, and she can be a bit tricky to get around to the start at times. He never really got her warmed up properly. When she came out of the gates, he felt she was a bit awkward.

“Michael has been over and has ridden her in trackwork, so he has more of an idea now of what she is like.

“She has got a little bit of a cantankerous streak in her but when you know her, she is harmless.”

Although it will be just over a month since her last run, Gerard said that is by design.

“She is not a big robust filly. She doesn’t take a lot of work and I’m pretty happy with where she is at,” Gerard said.

“Ballymore owned a bit of her and Ozzie Kheir was pretty keen to get in on the action so Mike let a little bit of her go.

“She is in different colours this week but she stays here to race at this stage. Down the track if she shows enough ability she needs to be in Australia.”

“They have to step up on Saturday, that tells us a lot more on what direction to go,” Gerard said.

“They have to be pretty competitive to get the ticket down to Christchurch.

“I don’t think the mile on her breeding will be any problem whatsoever.”

The Matamata stable have a further six runners on Saturday in Salt Bay, Lily d'Or, Masetto, Dragon Queen, Petrachor and Gus The Maverick but Gerard was left rueing a string of wide barriers.

“They haven’t been dealt the best of the draws in the world which makes it very tough,” she said.

“Masetto was very good in his first start over a mile. Stepping up to 2100m I think he will be tough but has a lot of weight on his back. He is on a Cups path this year and he needs to get a run under his belt before he goes to the Counties Cup (Gr.3, 2100m).”

Meanwhile, three-year-old colt Run For Cover impressed when winning at Matamata on Wednesday over 1400m at his third raceday start.

Gerard has a good opinion of the son of Burgundy, but said things hadn’t gone to plan at his first two starts, including finishing last in the Gr.2 Hawke’s Bay Guineas (1400m) but he relished a more positive ride yesterday.

“We came home scratching our heads after Hawke’s Bay, wondering what was going on and thought about gelding him,” Gerard said.

“I said to Mike he is a really good horse, ‘let’s go to Matamata and see what happens’.

“We pushed him forward yesterday and he showed us on the track that he has plenty of ability. Just those first few starts we took a sideways step and did things a little bit wrong but hopefully he is back on track now.”

Despite holding a nomination for the Gr.1 Al Basti Equiworld Dubai 48th New Zealand 2000 Guineas (1600m), Gerard said the colt would not be venturing south.

“There are some nice three-year-old races up here and we will look at targeting some of those,” Gerard said.

“The Wellington Stakes (Gr.3, 1600m) or the Trevor Eagle Memorial (Gr.3, 1600m) look like options. We will give him a couple of days to come through the run because it was a heavy track yesterday and it was quite tough.

“Up over a mile he will love it, he has been crying out for that for a wee bit.”