Hong Kong is awash with exciting young talent right now. Voyage Warrior’s blazing win on Monday has him pegged as a shooting star, while the likes of Aethero and Champion’s Way have shone brightly, too.

Frankie Lor is hoping Fat Turtle (130lb) can soar in the rising stars’ jet stream. The four-year-old has done plenty right in his first two starts: a debut victory over 1200m at Happy Valley preceded a tough second to Champion’s Way at Sha Tin, having worked hard to lead from gate 13.

“I think Happy Valley and Sha Tin are both no problem for him – last time he was drawn 13 and it was still a very good run,” Lor said at Sha Tin Tuesday morning (23 April).

The Smart Missile gelding is set to line up in the Class 3 Korea Racing Authority Trophy (1200m) at the Valley on Wednesday night (24 April). Zac Purton is booked to retake the reins from Karis Teetan but the champion jockey will have to overcome barrier 11 of 12.

“I think he has speed so it’s better to just jump and try to go and see if he can lead,” Lor said. “If he can, that’s good; if not, maybe he will be able to sit second or third.

“He looks like he’s still got improvement and later on, a mile should be no problem.” 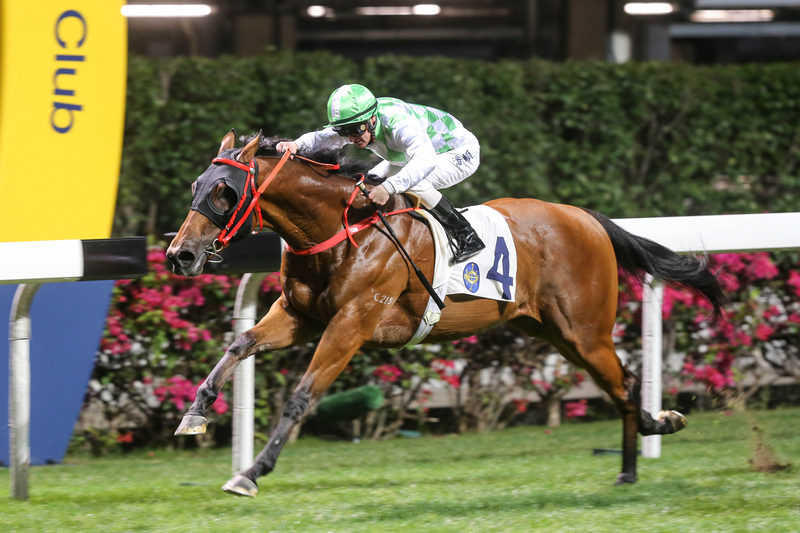 Another young gun with improvement and a possible step up in trip ahead of him is Red Desert (124lb). The Oasis Dream three-year-old raced four times at minor tracks in Britain, winning at Ffos Las and at the idiosyncratic Brighton, with its turning descent and sharp climb to the winning post.

The gelding went into training at Sha Tin in December and trainer John Size has prepped him with three barrier trials, the latest of which saw the German-bred pass the post first over 1000m.

“He’s shown a bit of speed,” the champion trainer said.  “He seems like he’s a willing sort of racehorse, he wants to do his job. He has one flaw in his playbook, he doesn’t jump well at the moment. He goes to the races and then he might learn to jump as we run him a few times - I’m hoping with the bit experience he’ll improve. But after a slow getaway he’s got pretty good speed and he seems to have good character,” he continued. “He wants to keep running so we’ll take him to the races.

“Happy Valley will be a new experience for him and hopefully he improves for that,” he continued. “I think he’ll go round the track ok, I don't think that’s going to be a problem for him. It’s the C track, it’s not an easy course to negotiate, but he’s only a small horse but he’s a strong little fella and I think he can keep up.”


Red Desert achieved his wins at around seven furlongs and a mile but Size has no qualms about starting the former Roger Charlton-trained galloper over 1200m in the night’s trophy contest.

“He might run a little bit further later on but sometimes when they come here their distances actually change. They can do different distances in Hong Kong to what they might have done overseas before they came. He needs time to get a bit stronger and run further, but at the moment I think I’ll give him a couple of runs at 1200 and see how we go.”

The eight-race card starts at 7.15pm with the Class 5 Daejeon Handicap (1200m) and concludes with the Class 3 Seoul Handicap (1000m) in which the Frankie Lor-trained Frustrated (123lb) will attempt to seal a hat-trick of wins.

The chestnut drew well clear when ahead of the rest in a 1200m barrier trial at Happy Valley earlier this month.

“I think his trial was very good, it was very easy and he’s a good horse. Zac said he’s a nice horse with speed. In Australia he was a leader so he has speed and tomorrow he will try to lead,” Ting said.

“He’s a big-striding horse, a nice horse with good heart.”