Fame shooting for the Stars in Kranji Mile

A couple of days after Fame Star’s fourth place in the Lion City Cup, connections had a throw at the stumps at another Group 1 event, the Kranji Mile, for a move not many would have guessed.

With the furthest the US-bred has ventured over in 26 starts being 1400m, his late entry in the $1 million marquee mile feature on May 22 comes as a bit of a surprise.

More effective when he uses his natural speed in his trademark free-galloping style upfront, Fame Star stuck to that pattern in the Lion City Cup (1200m) last Saturday. 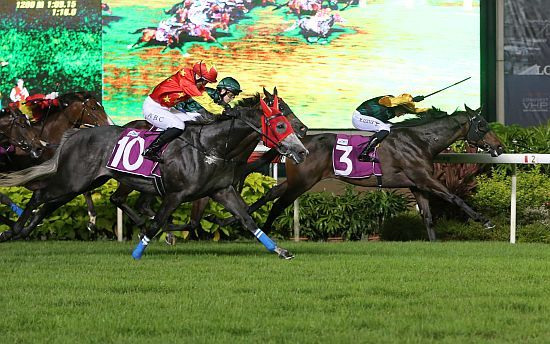 There was no pest to really take him on, even if Celavi kept him honest half-a-length away, but the 2019 Group 2 EW Barker Trophy (1400m) winner, who was still hanging on for dear life at the 50m, was swamped late. Fame Star has again capitulated even though he was on the Short Course.

Lim’s Lightning, who just tipped him out by a head at his previous start over the same course and distance, was again his nemesis, eclipsing him by an even bigger margin (more than one length) this time, not to mention Rocket Star and Grand Koonta also beat him.

On those runs, conventional wisdom would have the six-year-old son of Twirling Candy as a stamina doubt in a race like the Kranji Mile, but the Toast Trusts Stable and Shane McDonnell paid up the late nomination fee of $535 by the closing date of the second round of nominations on Tuesday.

Trainer Leslie Khoo, who is still chasing that elusive first feature race in 14 years at Kranji, supports the decision. The former top jockey does not think it’s such a flight of fancy if the race is run at a sit-sprint tempo.

“I agree the mile might be a bit long for him, but if he’s ridden like a sprinter only in the last 600m, he stands a chance,” said Khoo.

“I think Simon (Kok Wei Hoong) went a bit too fast in the Lion City Cup. He should have put the brakes on, stacked up the speed and saved him for the last run home.

“He still ran a good race, and he’s pulled up well. The Kranji Mile will have 400m more, which will make it even harder, but if he gets to save his energy better, it’s not impossible.

“To me, he doesn’t have to lead at all costs, especially if he is drawn wide. All his jockey has to do is let him drop his head early - if it’s in the lead, so be it, but he can also sit outside the leader and bide his time until the home straight before letting go.

The Michael Clements-trained Tiger Roar, an impressive last-start winner who runs in the $70,000 Class 3 race over 1400m on Saturday, and the Jason Ong-trained Special Ops are the other two second nomination entries for the Kranji Mile.

But due to their much lower ratings, their chances of getting in are slim given they currently sit in 29th (Tiger Roar on 68 points) and 32nd (Special Ops on 61 points) position in the order of entry while Fame Star (97 points) is guaranteed of a run as he is ranked much higher in fifth.

However, if Tiger Roar scores a big win on Saturday and some of the higher-rated entries drop out, he might still stand a chance of scraping into the final cut.