Perth mare Fabergino has ticked another box at Flemington and will now chase Group 1 glory over her favourite distance following an all-the-way win in the $140,000 Listed Kensington Stakes (1000m) on Saturday.

Fabergino was successful over Saturday’s course and distance last February before returning to the track and trip for victory on December 12.

Under the guidance of Jordan Childs, Fabergino ($3.60) raced to a 1-¼ length win from Sword Of Mercy ($6) with the $3 favourite Pandemic a further long-neck off in third place.

While Robertson returned to Perth, Fabergino stayed in Victoria for some R&R before building towards Saturday’s return win.

“This is why we’re here and it’s good that it pays off,” Robertson said.

“It shows that we made the right decision coming back over so it’s good to see her win again.”

While Saturday’s conditions were a little on the cool side and there was a blustery wind into runners faces, Robertson will be hoping for warmer conditions on Lightning day.

Childs has ridden Fabergino to her three victories at Flemington and said the mare deserves a shot at Group 1 glory.

“She’s pretty unique. She’s got her own style. It is pretty much that she finds a nice rhythm.

“The thing with her is that you can’t get into a wrestling match with her, you’ve always got to let her do her own thing and you’re almost a passenger.

“She finds that nice rhythm, is able to cruise along and she’s always got a good-turn-of-foot in the end.”

A six-year-old grey mare by Maschino from the Danzero mare Miss Razyana, Fabergino has won 11 of her 17 starts and $711,550 in prize money for her connections Mr J Beesley, Mr M F Mcdonagh, Mr J Tierney, Mr A J Anderson. 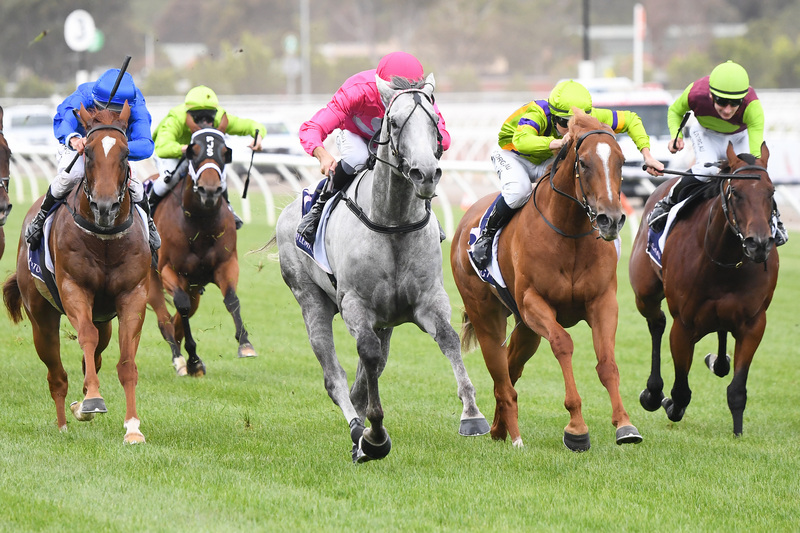