A titanic climax to the $2,000,000, Group 1, Bentley Australian Derby (2400m) at Randwick in Sydney on the first day of the 2021 The Championship witnessed Explosive Jack (NZ) (by Jakkalberry) score a narrow victory in a memorable three-way finish.

A Swan Hill maiden winner over 1600 metres in November and subsequent Listed Tassie Derby winner over 2200m in February, Explosive Jack established himself as the domestic racing scene’s most promising young stayer with a gutsy success in the Blue Riband.

Ridden to victory by ace distance rider John Allen, Explosive Jack only appeared on the scene over the final stages after being ridden back in the field in the early stages.

After ranging alongside Young Werther (NZ) (by Tavistock) and Lion’s Roar (NZ) (by Contributer) entering the final furlong, the dying stages of the contest then developed into a cliffhanger finish to the 3-year-old Classic.

With all three horses and riders putting everything on the line, it was Allen aboard Explosive Jack that would win the day at the expense of Tom Marquand astride Young Werther and Bernton Avdulla partnering Lion’s Roar, in arguably the best finish to the Randwick showpiece seen for many a long year.

Given every chance with a rails run throughout, Montefilia finished fourth as the $3.30 favourite ahead of Khoekhoe in fifth, the latter having also having been afforded every opportunity to come out on top.

However, as so often is the case these days, it was expatriate Irishman John Allen who claimed the spoils in a feature staying event… admittedly only just by the skin of his teeth. 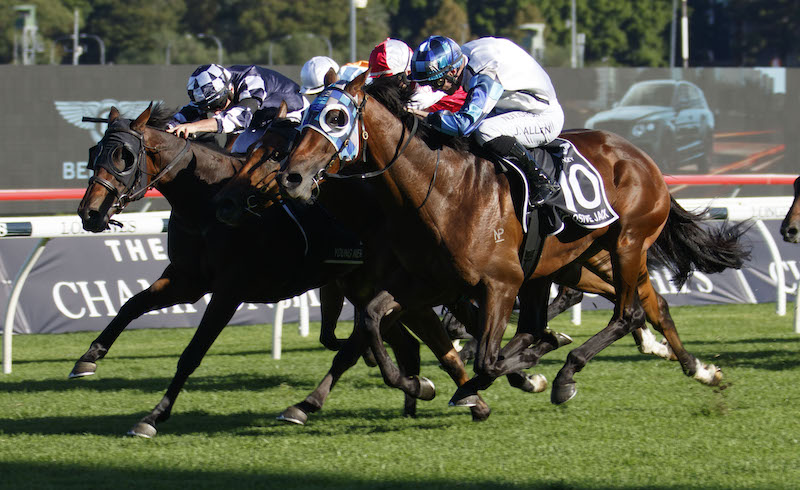 “He is a tough horse,” Allen began. “The distance was never going to be a worry with him.

“We got cover on the back of Young Werther. Montefilia actually popped out down the side and pushed me out a bit wide. I didn’t want to take off on him too early, so I let her come around me.

“Once we got to the outside, he really let down and he tries his guts out this horse.”

“I thought I did [get up] but I didn’t want to celebrate just in case I hadn’t. With the horse in between us, it was hard to tell. I thought I had my head down on the line. It was close, but we got there.”

Allen was also the regular partner of multiple Group 1 winner Kenedna which raced for the same connections, a fact that wasn't missed on the successful hoop.

“I’ve had great luck with these owners. They are a great bunch of blokes. They’ve always supported me 100 percent, so it is good to pay them back again. Hopefully there will be more successes in the future.”

Explosive Jack’s Derby success was yet another victory at the highest level for the Ciaron Maher & David Eustace training partnership. Naturally, Maher was elated after the win

“This horse has been in work a long time. It’s been to all our stables and the team have done an extraordinary job with him.”

Maher continued: “His last piece of work on Saturday was the best piece he’s done since he’s had a saddle on his back. Johnny [Allen] was on board him at Werribee and he just said ‘he’s flying’, and I said ‘well that’s how it looks’.

“He thought he might lack that little bit of class, but we knew he was a very, very strong stayer and he was right to go, so full credit to him.”

As with Allen, Maher also had nothing but praise for Explosive Jack’s connections.

“To the owners; they‘re great mates and just a really good bunch of people, and really enjoy the whole rollercoaster of racing.

“They were fortunate enough to be here with Kenedna [winner of the Queen Of The Turf in 2019] not so long ago, and then to be back here again I couldn’t be happier, and I can’t thank them enough.”

Maher concluded: “With every run he’s got better. Every run, so who knows. He’s still improving now — who knows where the ceiling is.

“Anyway, I’m sure they’ll enjoy today and probably even tonight even better.”

This year’s Randwick Derby winner Explosive Jack was returned at $16.00, the runner-up Young Werther at $15.00, and the minor placegetter Lion’s Roar at $8.50.

Explosive Jack has now won four of his seven starts and placed on another couple of occasions for $1,459,910 in earnings.

Absolute scenes in the Australian Derby! Explosive Jack was exactly that to get the Group 1 win. pic.twitter.com/Iyuss3F2Tr

Hugh Bowman (The Frontman): “He’s just not settling well enough at the moment.”

Tim Clark (Yaletown): “See how he pulls up. Obviously nowhere near his best.”

Tom Marquand (Young Werther): “Huge performance. It was a shame that the winner came the other side of Lion’s Roar because if next door he probably would have knuckled down and beaten him. It was a shame.”

Craig Williams (Khoekhoe): “He’s definitely a quality horse. He gave me a lovely ride throughout from a very generous barrier. I think he thought his job was done. He was last horse off the bridle but got to the front and thought it was job done. He’s a high quality horse going forward.”

Rachel King (Prompt Prodigy): “The back up probably too much for him. Likely needs a break.”

Jamie Kah (Toscanini): “He’s not very interested at the moment. Switched off here.”

Keagan Latham (Rondino): “Really happy that he relaxed really nicely. I think he was revved up last week. He handled the whole race really well but better next prep.”

Andrew Adkins (Zakspeed): “Nice run stepping up in class. Only maturing as he goes.”

Damian Lane (Olympic Gaze): “Good run for a horse of his grade. They had too much the last 600m.”