That’s the thought of trainer Trudy Keegan after the filly’s dominant debut victory over 1200m at Awapuni on Saturday.

The daughter of Proisir missed the jump by a couple of lengths before she quickly regathered the pack under the urgings of jockey Lisa Allpress.

She picked her way through the field and found a gap turning for home and was able to comfortably run away to a 5-1/4 length victory over Jugador, with Lincoln’s Kruz a further three-quarters of a length back in third.

Although she had a high opinion of her filly heading into the race, Keegan was delighted to see her judgment vindicated on Saturday.

“We were over the moon, especially as she missed the jump. But that’s just first starters for you,” Keegan said.

“She has got enough class and ability to be able to overcome getting things wrong. She is still very raw and there is a lot of improvement to come in her yet. We didn’t expect her to miss the jump. She just pulled her head down apparently as the gates opened and did a bit of a rear and came out a bit unbalanced.

“For her to travel up like she did and to push up between runners and get in amongst it like that was fantastic to see. Lisa said at the half-mile she had so much horse under her and that she just needed some daylight and it is all over, and that is what happened.

“It was fantastic to see her big, white face appear at the top of the straight and she won very easily," she said.

Towering at 17 hands, Keegan said they have taken a patient approach with Aimee’s Jewel and have allowed her to develop into her big frame.

“She is 17 hands and she still has to come up at the wither yet,” Keegan said. “She is only a rising four-year-old, so she is a very big lass and we have been very patient and gentle on her.

“She is a very relaxed filly, so nothing much has upset her, maybe that’s partly because everything comes really easily for her and I have never really had to push her too hard because she has so much natural ability.

“She isn’t really going to hit her straps for another 12 months yet, so that is very exciting.” 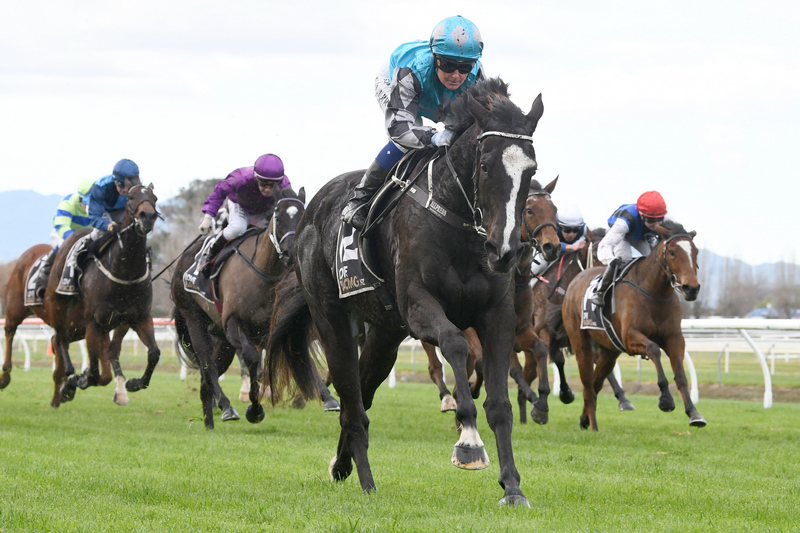 While she was impressive on Awapuni’s Heavy11 surface on Saturday, Keegan believes she will be better suited on better ground.

“We are looking forward to seeing what she can do on top of the ground as well because she didn’t actually love that track on Saturday,” Keegan said.

“She did a bit of a dip turning for home and Lisa said she was in the worst of it the whole way. By the way she won on that surface I think that is a sign of how much ability she does have.”

Keegan has a lot of time for the filly and believes that she has the ability to gain black-type in the spring and possibly campaign in Australia next Autumn.

“We will just quietly take her along and let her come up the grades,” Keegan said. “If she continues to progress as we think she will then we will look at getting some black-type in the spring with her.

“In the autumn she may head to Australia, but with the lockdown and travel restrictions it’s just a bit tricky at the moment for us to be thinking about going over there at this stage.”

Aimee’s Jewel was one of a number of horses Keegan kept ticking over on her 80-acre Stratford property during the COVID-19 enforced lockdown period, and she said that decision is starting to pay off for her stable now.

“It’s nice to have picked up a couple,” Keegan said. “We kept a team going over lockdown, so it has made that decision worthwhile.

“It was a decision made by our owners. We gave them the option and figured out each horse individually. We worked hard through lockdown. We have 64 horses on the property, so it was a bit like being a dairy farmer, just because the country was in lockdown we still had a lot of work to do.

“We have got 30 in at the moment and we have another half a dozen that will come back into work in August.”

While the world is going through uncertain times at the moment, Keegan said she is pleased that she has diversified her business.

“We have a steady stream of breakers all the time,” she said. “We get sent all sorts, we break in ponies and hacks.

“I do equine body work as well, so we get horses through for schooling and therapy.  With the way things are, I think it is a positive thing that we are quite diverse.”

While Keegan is looking forward to the new season with Aimee’s Jewel, she is also excited about the prospects of another rising four-year-old in her barn.

“He was very immature when he was doing that. We have certainly got big raps on him, he just needs the middle tracks really – the Dead to the Slow tracks. He is very exciting going forward.”