Allen headed home to Ireland during the last Australian summer and did some work for O’Brien during the trip.

The jockey revealed on RSN927 on Tuesday morning he had potentially been in line for the ride on Epsom Derby winner Anthony Van Dyck which has since been awarded to Hugh Bowman.

Anthony Van Dyck is set to contest both the $5 million Group 1 Caulfield Cup (2400m) on October 17 and Melbourne Cup double.

Bowman heads to Melbourne after he rides at Randwick on Saturday.

Santiago, winner of the Group 1 Irish Derby at The Curragh in June, sits on the fourth line of betting at $17 in the Melbourne Cup.

Russian Camelot and Surprise Baby head the market at $8 ahead on Santiago’s stablemate, Tiger Moth, at $11.

Allen first came to Australia to try his hand as a jumps jockey, but hard saw him shed weight and try his hand on the flat.

He has now ridden 10 Group 1 winners and will be lining-up for his second Melbourne Cup ride having partnered Downdraft last year. 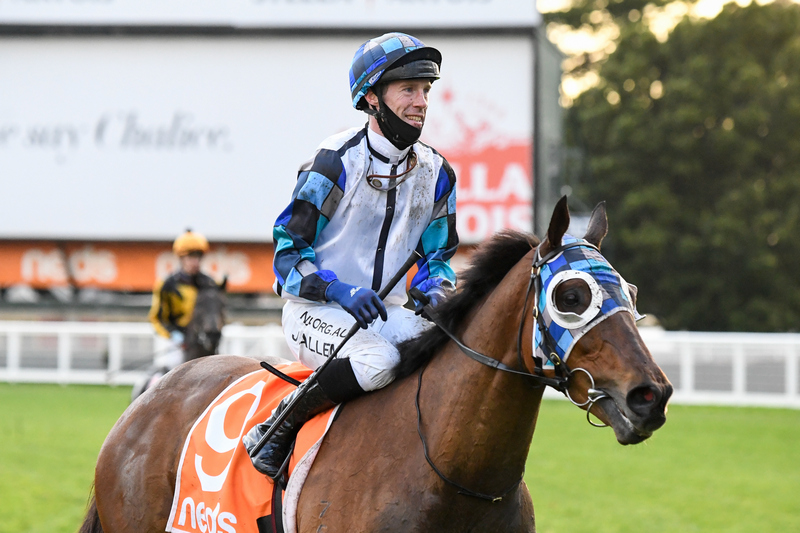 Santiago is due into Melbourne on Friday night with another 28 horses for the Victorian Spring Carnival.

“There was a bit of toing and froing. There was talk of possibly riding Anthony Van Dyck but when Hughie committed to come down that didn’t happen and I was only booked on Santiago on Sunday morning.

“There’s still a bit of water to go under the bridge. He’s still on the other side of the world but hopefully he can get over here in good health.

“He’s got the right profile. European three-year-olds have done very well out here in the last three or four years and arguably he’s got better form than any of them.”

Santiago has 53.5kg in the Melbourne Cup and Allen said he has plenty of time to prepare for the ride at that weight.

Allen had already begun shredding weight to ride Junipal in the recent Sir Rupert Clarke Stakes, although the gelding did not gain a start, and the jockey expects Junipal to get that weight in the Group 1 Toorak Handicap (1600m) at Caulfield on Saturday week.

“I’ve been watching my weight over the past few weeks so it shouldn’t be a problem,” Allen said.

In the meantime Allen is hoping for an improved performance from Young Rascal in the Group 3 Bart Cummings (2500m) at Flemington on Saturday.

The performance will determine whether the French-bred UK import runs in the Caulfield Cup.

“He’s been a little disappointing in his two runs this time in and we’re hoping for a better run this time,” Allen said.