Etoile, runner-up as the favourite when invading from New York for trainer Chad Brown in the August 15 Dance Smartly, made amends at Woodbine on Sunday by taking the Grade 1 E.P. Taylor Stakes by a neck under rider Rafael Hernandez.

Court Return, an improving half-sister to multiple Grade 1 winners Channel Maker and Johnny Bear, closed resolutely on the far outside to finish second in the field of seven for the $600,000 race over 1 ¼ miles of the renowned E.P Taylor turf course.

"It was a good trip,” said Hernandez, who was riding his meet-leading 12th stakes winner. “I called Chad this morning and he told me, 'Raffi, try to get a good trip like last time. Just make sure you clear down the stretch.'

“He told me he'd been working the horse a few times and he put her outside of other horses, and she'd be finishing great.”

Theodora B., who had defeated Etoile by three-quarters of a length in the Dance Smartly over the same course and distance, assumed her preferred position on the front end while carving out fractions of :26.44, :51:03 and 1:15.50 over the ‘good’ course. 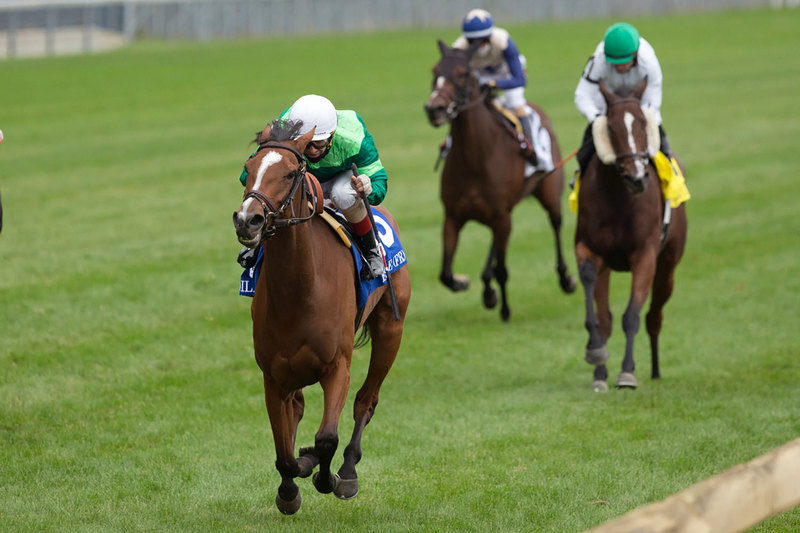 Elizabeth Way prompted the pace from second on the outside with Etoile sitting pretty while in easy striking distance in third on the inside.

Turning for home, Hernandez swung Etoile off the rail and was getting to Theodora B. as the mile went in 1:38.68.

Two lengths in front with a furlong to go, Etoile had enough left to prevail with Court Return ending two lengths to the good of third-place Secret Message.

"I heard that other horse coming late but I wish she was coming closer,” said Hernandez. “It was too far out so my horse couldn't see. That's why I switched the whip to the left, to try to get her out and get her attention. But we did it."

Rideforthecause, coming off her first stakes win in the 1 1/8 mile Canadian, was unable to mount a serious challenge while another half-length back in fourth.

Theodora B., Pretty Point and Elizabeth Way completed the order of finish. The final time was a solid 2:03.12.

The E.P. Taylor also was the final leg of Woodbine’s “Ladies of the Lawn,” a four-race turf stakes series for fillies of mares consisting of the Nassau, Dance Smartly, Canadian and E.P. Taylor Stakes.

Elizabeth Way, the Nassau winner, ended third and fourth in the ensuing legs and finished with 19 points for the top bonus prize of $50,000. Second money of $15,000 went to Etoile with 17 points, and $10,000 for third, to Canadian winner Rideforthecause with 13. Points were awarded on a 10-7-5-3-2 basis for the top five finishers in each stakes with one point earmarked for other also rans.

Starship Jubilee captured the E.P. Taylor while prevailing as the inaugural “Ladies of the Lawn” champion and went on to be voted Canada’s Horse of the Year.

Etoile, a French-bred four-year-old owned by Peter Brant, Mrs. M. V. Magnier, and Mrs. Paul Shanahan, was recording her first Grade 1 win and first victory of any stripe in just her third start this side of the pond.