Racing at Meydan on Thursday commenced with the first Purebred Arabian contest at the course this season, the 1400m Group 2 Bani Yas presented by Longines Hydroconquest. As it was last year, it was won in smart style by Sheikh Abdulla bin Majed Al Qassem’s Ibrahim Aseeli-trained ES Ajeeb, who was never headed under regular pilot Sam Hitchcott.

Well away, the pair were soon able to get across to the rail and clear at halfway never looked likely to be caught although, understandably, tiring in the final 150m. Aatebat Al Khalediah closed determinedly to come up just short, while slow-starting Mawahib, second 12 months ago by a nose in this race, ran on impressively for third. The 5-year-old homebred has now won eight of his 12 starts, seven times on dirt and became the third dual winner of the contest. His sire, Big Easy, also won in 2004.

“He has to be my favourite Purebred Arabian and we knew he had improved from his return at Abu Dhabi,” Hitchcott said. “His natural speed is main attribute, but as gets older and matures, we may try him over 1600m but we would probably have to ride him more patiently.” 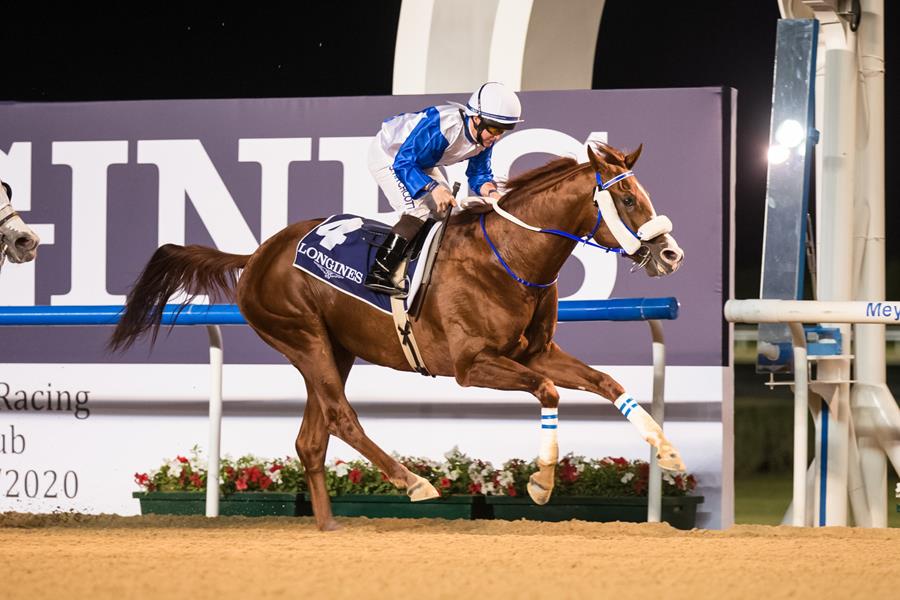 The featured Thoroughbred contest, the Longines Master Collection over 1600m, was dominated by trainer Satish Seemar, who finished one-two with Tadhg O’Shea-ridden George Villiers chasing down Bochart and apprentice Sean Kirrane on the wire. Nearer last than first leaving the back straight, the winner, who finished plastered in kickback, started to make progress between horses before digging deeply for his jockey to lead where it mattered.

“We always knew this horse had a lot of ability and he was a willing partner tonight,” O’Shea said. “The team always hoped he was a Carnival horse and this suggests he can be. I had a lovely low weight, but turning for home I thought Bochart had the race, but my fellow, who does not really like the kickback, has really responded well.”

Seemar then supplied another one-two finish in the Longines DolceVita, a 1200m handicap where Connor Beasley and filly Lady Parma bulled their way through the boys to take command within the 200m and held off yard-mate Way of Wisdom and jockey Richard Mullen. A 3-year-old Exchange Rate filly, the winner is owned by the Parmar Family and had shed her maiden tag on her previous and sixth career start over 1200m at Jebel Ali a few weeks prior. Her Meydan performances last season included a third in the UAE 1000 Guineas (Listed). With Way of Wisdom’s second, Seemar had saddled the runner-up in the first five Thoroughbred races.

“It was a very emotional moment, because she needed time to mature,” Parmar said. “She’s a big filly and she didn’t fill out last year. If anything, we threw her into the deep end last year in the Guineas at that distance, but she had the heart to still come third. We put her away for the summer and with God’s grace, she is back this year. Her win at Jebel Ali was my first win there and this was my third win here, but it’s been three years. This was special, to come back after such a dry spell. You don’t know how much this means to me. We really thank the Royal Family for allowing us private owners to have this in Dubai.

“I just looked at her rating, which is 86, so there is a possibility for the Carnival and you have to ask yourself if you want to push her this year in 2020 or be patient and wait another year,” Parmar continued. “I don’t want to blow her mind. It’s very easy to be greedy and get excited, but I’m not convinced at this stage. We’ll let the emotions calm down and let her come out over the next few days. Then we’ll decide with Satish and (assistant trainer) Bhupat (Seemar) what the best course of action is.”

A 1400m maiden restricted to 2-year-old colts and geldings, the Longines Conquest V H P, was won in determined fashion by Al Modayar for jockey Fernado Jara and trainer Ali Rashid Al Rayhi. Prominent throughout, he turned back a strong bid from Seemar-trained Commanding and earned an 84 rating in the process. A son of freshman Coolmore America stud Competitive Edge, the good-looking dark bay improved upon his debut fourth astern Barack Beach over 1200m on opening night (Oct. 24).

Owned by H and B, he was purchased most recently for $64,560 at Tattersalls Craven Breeze-Up Sale in April by former UAE Champion Jockey Ted Durcan and is a half-brother to a winner in Panama, also the birthplace of Jara.

Jara said: “Credit to the horse because he really likes to fight and has shown a great attitude to win this. When challenged, he fought back very bravely.”

It looked most unlikely at hallway when Galaxy Road was last in the1200m maiden, the Longines Conquest Classic, but he flew home in the final 300m to snatch victory from Underwriter. In the end, Galaxy Road and Antonio Fresu eased up at the wire, appearing much the best for trainer Musabbeh Al Mheiri and Galaxy Racing. The 3-year-old Elusive Quality colt was having just his fifth career start and third this season.

Fresu said: “We missed the break, but I was happy to be patient and take my time, because they were going very fast in front and he picked up in the straight when those in front were tiring.”

Having shot out of the starting stalls under Xavier Ziani, Gundogdu seemed to be allowed an uncontested lead in the 1900m handicap, the Longines Record Collection, before scampering clear at the top of the straight. Eventual third and market favourite Tradesman was one who tried to go after him, but he was denied second close home by Cachao, with Quartier Francais running on from far back to claim fourth. Owned by Hamad Rashed bin Ghadayer and in the care of Salem bin Ghadayer, the 4-year-old gelding was winning for a third time.

Ziani said: “The horse really enjoys those tactics and it makes my job easier when he breaks so well and travels so strongly because he can quicken.”

The finale, a 1400m handicap, the Longines La Grande Classique, was won in workmanlike style by Mohd Khalifa Al Basti’s Zaajer, who held off a game and persistent Mayaadeen. Ridden by Fernando Jara, the victory gave trainer Al Rayhi his second of the night—an evening in which he also had a second in the G2 Bani Yas.

“It was a good night,” Jara said. “This horse he ran a really big race last time and it seemed like he was getting better. He was travelling wide and just keeps going after a bad draw. Hopefully he just keeps improving. At this point, we’ll have to wait and see.”