Epsom draw a blow for Richards

Champion trainer Jamie Richards is hoping for another fruitful day on both sides of the Tasman on Saturday despite the stars not aligning for star mare Probabeel in the Gr.1 Epsom Handicap (1600m). 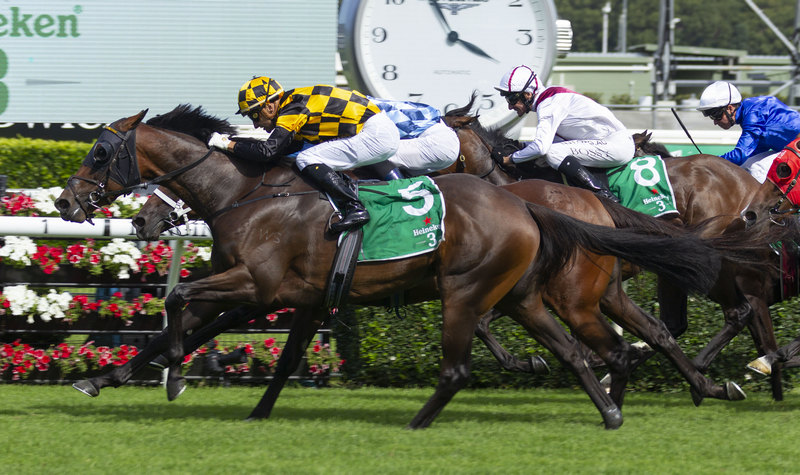 The Cambridge Stud-owned mare drew barrier 18 for the A$1 million feature and as a result of the wide draw drifted to a $7 second favourite.

The Savabeel four-year-old has had a meticulous campaign to get to the Epsom where she will shoulder 52.5kgs after winning the Gr.3 Bill Ritchie Handicap (1400m) last start (carrying 57kgs), a penalty-free and ballot exempt lead-up to the famous Randwick mile.

But Richards, who couldn’t hide his disappointment when Te Akau Shark drew the outside gate in the Gr.1 Cox Plate (2040m) last year, had a similar sinking feeling when learning of Probabeel’s wide draw.

“I am gutted, but we are just going to have to be a bit patient and most-likely go back and give her a crack at them late and see how it all fits together,” he said.

“We will be open-minded about how she is ridden and thankfully we have a very capable rider (Kerrin McEvoy) who knows exactly what it takes to win these big races.”

While one variable has gone against Probabeel, the mare will get her favoured firm underfoot conditions on Saturday, with the Randwick track currently a Good 4 and fine weather forecast.

“She likes the better ground and has a very good turn of foot on top of it, so I certainly appreciate the good weather forecast,” Richards said.

While the Kiwi mare is likely to bat deeper into the spring, punters can rest-assure the Epsom is a target race.

“This has been the aim all the way through, trying to get her into the race with the right sort of weight that we thought she could win,” Richards said.

“She has got in there with 52.5kgs, as has Funstar, so for a four-year-old mare that has got Group One form in the autumn in Sydney, I think it is quite a nice weight.”

The grounded 31-year-old has already accomplished more than most in his short career to date but draws inspiration from a fellow Kiwi’s success over the Randwick Mile and the subsequent flow-on effect.

“I guess you sit back and watch, and you look through the Doncasters and the Epsoms and you see that Chris Waller really took his career to a new level after winning these sorts of races,” Richards said.

“So you’re always watching and keeping an open-mind with these sorts of races. This has been the target for her right from when she came back in. The idea was to make use of her handicap and stay away from the weight-for-age races as a spring four-year-old and hopefully the rest of the week goes well.”

Richards admits to following the Chris Waller playbook when navigating a path to the Epsom and Waller looms as a major threat, with no less than eight runners in the 20-horse field.

“He’s been champion trainer in Sydney for the past 13 years, so I definitely take note of what he does and you just sit back and watch and see how it plays out,” Richards said.

“The Bill Ritchie was the race for us to get her into the Epsom. It was a race that Kolding came through last year and we had a month between runs after her first-up run where she ran a slasher.

“It has all gone according to plan, we just need a bit of luck from the barrier.”

Like Waller, Richards has a work ethic few can keep up with.

The Matamata horseman made a flying visit to Christchurch on Tuesday afternoon to oversee preparations for his southern raiders ahead of Saturday’s Riccarton meeting, where amongst a host of likely runners on the card, smart filly Cornflower Blue will contest the Listed New Zealand Bloodstock Canterbury Belle Stakes (1200m).

The powerful Te Akau Racing team also has a strong hand at Hawke’s Bay on Saturday, with Richards to saddle joint-favourites Avantage and Melody Belle in the Gr.1 Windsor Park Plate (1600m).

TAB bookmakers can’t split the pair at $3.20, while Richards also has ever-improving Group Two winner Prise de Fer ($10) in the star-studded mile, with the patiently-handled five-year-old skipping the Gr.1 Tarzino Trophy (1400m) a fortnight ago to step straight to a mile.

“Avantage is going well,” Richards said. “Her lead-up form is solid. She missed the kick a bit the other day but we think we’re on top of that.

“Prise de Fer is the new horse on the scene after not racing at Hastings on the first day by design. We didn’t think he would handle the three trips to Hastings in a six-week period. We concentrated on legs two and three (of the Hawke’s Bay Triple Crown) and he is in good shape and Opie has chosen to ride him.

“Melody Belle has come back in good shape and she is a champion. The only concern is where her fitness is at following that week or 10 days off in Sydney, but her work has been good and she trialled well.

Richards is also pleased with unbeaten galloper Need I Say More, who will be ridden by Troy Harris and likely start favourite in the Gr.2 Dundeel At Arrowfield Hawke's Bay Guineas (1400m).

“He is in good shape,” Richards said. “I think we did the right thing spacing his runs a bit. He is a horse that is quite an athletic, fit sort of horse that doesn’t need a lot of racing.

“His work has been good, and I thought his exhibition gallop the other day was brilliant.

“He is fit and forward and will be handy. He doesn’t necessarily have to lead but he will be getting a soft sectional somewhere and if they want to take him on, we will take a sit.”

Cambridge trainers Murray Baker and Andrew Forsman are hoping the gelding of Unition has done the trick.

The China Horse Club-owned three-year-old stood out as an early juvenile when winning the Listed Fasttrack Insurance 5K Bonus 2YO Stakes (1100m) on debut before placing in the Gr.2 Wakefield Stakes (1100m) in his only other two-year-old start.

However, the son of Fastnet Rock and Group One winning mare Diademe disappointed his connections with his first-up eighth-placing in the Gr.3 Northland Breeders’ Stakes (1200m) and the decision was made to geld him.

Unition came through the operation well and showed positive signs when winning his 1000m trial at Te Aroha on Tuesday.

“It was a nice win,” Baker said. “He ran very disappointingly at Te Rapa first-up and he was immediately gelded.

“Let’s hope he is right now and has his mind on the job and can transform that form onto raceday.”

Nominated for the Gr.1 Al Basti Equiworld 48th New Zealand 2000 Guineas (1600m) in November, Baker said they are yet to decide his next step towards the three-year-old feature race.

“We haven’t really decided yet,” he said. “We will pick something out in the next few days for him.”

Meanwhile, the spring campaign of Group One winner Quick Thinker has ground to a halt, with the four-year-old entire currently undergoing a veterinary examination in Ballarat after his fifth-placing in the Gr.3 JRA Cup (2040m) last Friday.

“His campaign is on hold at the moment,” Baker said. “We are going to know more in the next couple of days. He was very disappointing the other day and we are just looking into it.

“He hung very badly so there is obviously something not right.”

Hutchings recorded the highlight on Henschel at Port Macquarie for trainer Allan Denham, taking his tally for the new season to six.

As a result of his constant struggle to keep his weight in check, Hutchings is restricted with raceday opportunities, but is pleased to be race riding after a break when returning to New Zealand last year to regroup and get his career back on track.

Hutchings rode a personal best of 109 wins in the 2013-14 season when apprenticed to Graeme Rogerson and also recorded his two Group One  wins for the Tuhikaramea trainer on Soriano in the 2014 Zabeel Classic (2000m) and the Herbie Dyke Stakes (2000m).

A shift to Sydney to team up with Chris Waller resulted in him becoming the first Kiwi-born jockey to win apprentice titles in New Zealand and Australia when taking the Sydney Apprentice Jockeys’ Premiership in 2015-16 (his first full season in Sydney) and he joined fellow Kiwi James McDonald as a four-time champion apprentice.

During his four-year stint with Waller, Hutchings rode 149 winners, including Burbero in the 2015 Gr.2 Missile Stakes (1200m) at Randwick.