Standby starter Entertainer made the most of his late call-up to shine again on his pet course and distance in the $70,000 Class 3 race over 1100m at Kranji on Saturday.

Already a four-time winner over the Polytrack 1100m in his customary catch-me-if-you-can tactics, the Zoustar five-year-old was right in his element the moment he was sooled forward by leading apprentice jockey Hakim Kamaruddin, especially when he gets the stage all to himself.

At his last start when upgraded to Class 3 for the first time, Entertainer was unable to come across from a wide alley, getting trapped three to four deep facing the breeze, but there was no such predicament on Saturday. 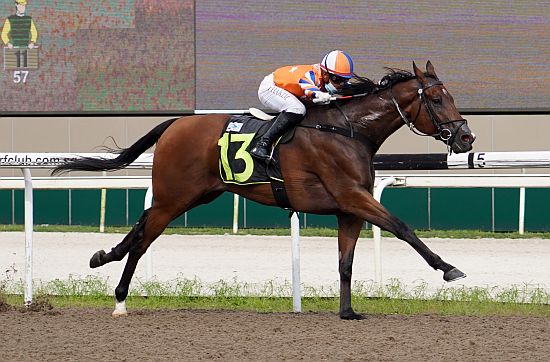 Biding his time in front, Hakim controlled the pace to a nicety before going for broke upon cornering. With the luxury load of 51.5kgs on his back, Entertainer found another length at the 300m as he fended off the challenges of stablemate Super Invincible (Shafiq Rizuan) and Siam Warrior (Matthew Kellady).

Favourite Sure Will Do (Simon Kok Wei Hoong) was also a spent force after burning out from his torrid trip three wide, but Songgong Hera (Daniel Beasley) was still within striking distance, not to mention the fast-closing longshot The August (Koh Teck Huat).

But Entertainer would not buckle as he bowed out the winner with half-a-length to spare from The August, who finished in advance of Songgong Hera by an identical margin.

Returning $41 for a $5 outlay, Entertainer was timed at 1min 4.85secs for the Polytrack 1100m. The bold frontrunner has now chalked up five wins and two thirds from 11 starts for more than $105,000 in prizemoney for the Fortuna NZ Racing Stable - and also brought the smiles back on Walker’s face.

“Entertainer seems to get on well with Hakim. They have built a strong record together (three wins), especially over 1100m.

“I just told Hakim to be positive and get across. It was not too bad compared to his last start when he couldn’t get in.

“He’s a horse who’s got a big action and he couldn’t really use his action at his last start.”

Saddling favourite Aftermath in the last, the $50,000 Class 4 race over 1100m, Walker was hoping to end the day with a flourish, but had to settle with that lone win.

The Spirit Of Boom four-year-old was in a stalking position in third on the fence, but looked tightened for room 600m out, and got shuffled back. It was the Desmond Koh-trained Moongate Star (Saifudin Ismail, $88) who shot through the pack to emerge the winner while Aftermath beat one home.

“I think Aftermath got checked right on the point of the turn. There will probably be an enquiry as he was taken his rightful running,” said Walker.

“Over those short distances, once you lose your momentum, it’s hard to come back.”

Hakim was aboard Aftermath, but unlike his master, the Malaysian rider was at another prolific day, a hat-trick of wins following earlier wins on Street Party ($12) for James Peters and Lucky Jinsha ($10) for Tim Fitzsimmons.

He is now well clear in both senior and junior premierships. On 46 winners, he is as good as home and hosed on the apprentice jockey log with the next best, Krisna Thangamani a distant second on 16 winners, but still remains catchable on the premier table with Danny Beasley (author of a double with Lim’s Denali and Real Efecto) only nine winners behind on 37 winners.