Elite Incredible close to two years since only win

With almost half of the card to his name, Singapore champion trainer Michael Clements had a mortgage on Sunday’s $85,000 Spalato 2014 Stakes at Kranji, with one of the better chances from his quartet of runners, Elite Incredible duly paying dividends.

The Argentinian-bred five-year-old, who was at his maiden win for Clements since moving from the now Australian-based Cliff Brown, led all of the way for leading apprentice jockey Hakim Kamaruddin in the Kranji Stakes B race over 1800m. The swoopers - around three to four from his eight rivals - descended thick and fast, but Elite Incredible, hard up against the rails, was able to thwart all comers rather comfortably in the end, with a good half-a-length to spare.

Tangible (A’Isisuhairi Kasim) and So Hi Class (Louis-Philippe Beuzelin) could have franked Clements’ stranglehold with the perfect 1-2-3, but trainer Hideyuki Takaoka’s Wind Trail (Marc Lerner) upset those designs when he slid in between to steal second place by a head. 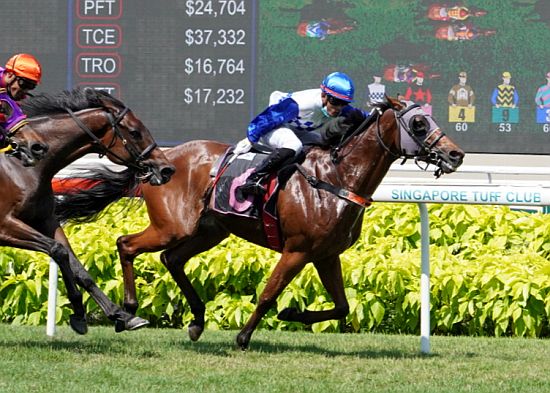 Tangible himself just nosed his stablemate out for third place. The winning time was 1min 48.8secs for the 1800m journey on the Long Course.

Clements had actually made Elite Incredible his best chance, jointly with his fourth runner Ocean Crossing (Simon Kok Wei Hoong), but the All Too Hard five-year-old never fired a shot to beat one home, for the only blot to the Zimbabwean-born handler’s copybook.

“I thought all four horses would be in the shake-up to be honest, with Elite Incredible and Ocean Crossing the two best chances, but Ocean Crossing was a bit disappointing,” he said.

“The pace didn’t suit him, he just did not quicken, but the other three all ran well.”

It may be early days, but Clements was certainly using Sunday’s contest as a preliminary guide to the Group 1 trio of distance races coming up in the second half of the season culminating with the $1 million Group 1 Singapore Gold Cup (2000m) on November 11.

“Definitely, we’ll be looking at the better races for Elite Incredible down the road. He’s run a few times in Group races and did well (second to Top Knight in last year’s Singapore Derby the most notable),” said Clements.

“The other three horses are also in the mix, but we’ll probably head more towards the Gold Cup since it’s a handicap race while it may be harder in the set-weight races like the Raffles Cup (September 18) and Queen Elizabeth II Cup (October 16).

“Today, Elite Incredible had the gun run, everything went his way. Not many among the others had pace, he had a good barrier (two), so he was always the likely leader.

“I just told Hakim to let him relax as much as possible. He dictated in front while at his last two starts, he also led, but he had other horses firing him up, and it doesn’t take a lot to fire him up midrace.

“He travelled as he liked and it was good to see him back in the winner’s enclosure.”

It has indeed been a long time between drinks for the son of Valid Stripes – close to two years, 672 days to be exact, since his only previous win in 22 starts in a 1200m race for Class 4 gallopers on September 22, 2019.

Still, with three seconds and four thirds under his belt, he has now taken his stakes earnings to a handy record of around $420,000 for the Elite Performance Stable.