Tactical speed won the day in the first race on Caulfield's Saturday program in metropolitan Melbourne when Efflorescence (by I Am Invincible) was taken straight to the lead in the $100,000 MRC Neds Price Boost Multi Handicap (1400m) before scoring by the skin of his teeth in the 8-runner 2-year-old contest.

A $510,000 yearling sale purchase having only his fourth outing in public after breaking through for his maiden success at his previous start, Efflorescence was teamed-up again with rider Billy Egan who'd proved successful on the colt when winning on the Synthetic track at Ballarat late last month.

Again ridden aggressively from the start to dictate terms at the head of the field, Efflorescence was afforded a couple of easy 'furlongs' mid-race before establishing what appeared to be an insurmountable advantage soon after entering the home straight.

However, the strapping son of I Am Invincible needed the line, and need it quickly, with 100 metres to negotiate, and ultimately just managed to scrape home ahead of the late finishing Wunambal (by Wandjina).

In fairness to the winner, the runner-up Wunambal was given absolutely every chance by his partner Ben Melham after breaking smartly from the inside barrier. And while he would have almost certainly won in another stride, it was Efflorescence's brilliant turn-of-foot at the top of the straight which essentially won the race.

Confrontational (by Redoute's Choice) finished third, while Gdansk claimed fourth after doing almost everything wrong at virtually every stage of the contest — including the final 100 metres when hanging in behind the minor placegetter and losing a genuine chance of finishing in the first three. 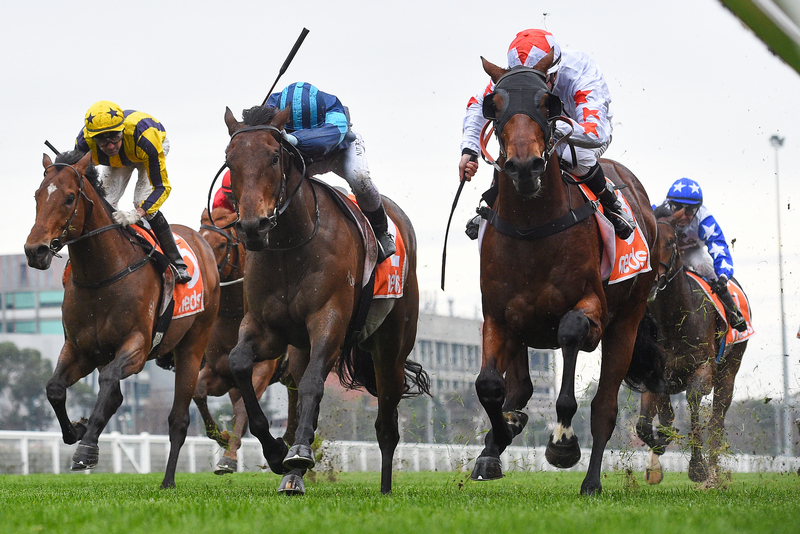 The winner Efflorescence has now won two of his first four starts for trainer Anthony Freedman and owners Phoenix Thoroughbred. Speaking on behalf of connections, the trainer's son Sam Freedman indicated that the backward colt is still very much learning the ropes.

“He’s been a work in progress,” claimed Freedman Jnr. “He’s improved throughout this preparation. He’s become a little more race savvy and once you reach metropolitan grade, you need to do everything right to win.

“In his first couple of starts, we had the blinkers on him and he was slow away on [both] occasions. Last start he pinged the gates, and today he was a little tardy away [again].

“But next preparation we’ll probably look to try and ride him with a bit of cover in his trials and maybe add another chink [sic] to his armour.”

In reference to the stable's association with the colt's worldwide prominent owners and the untapped talent of Efflorescence, Sam Freedman remarked: “But it is a big thrill [to win] for Phoenix Thoroughbred who have entrusted him to us. He was an expensive yearling and he’s just a 'frame' at this stage. He’s probably another six months away and hopefully he can keep improving.”

Better known for his association with the Paddy Payne stable, winning rider Billy Egan again illustrated his skills in the saddle. One of the unsung talents of Victorian racing, Egan has now ridden over 100 winners in his home state this season, though is barely into double figures in the metropolitan area due to lack of opportunity.

Egan observed after his winning ride: “He is [a colt with a future]. He’s still learning. The penny hasn’t dropped.

“He’s quite a big, gross horse, so it’s nice to see him string a couple [of wins] together. He was getting quite weak there towards the line, but I still think there’s good improvement in him.”

Egan added: “He was a lot kinder today than he was at Ballarat, so I think he might be learning to take a sit.”

Efflorescence was sent to post the $4.40 favourite of the race, runner-up Wunambal at $8.00, and the minor placegetter Confrontational at $9.50.

Ironically, Oasis Bloom was trained to black-type success by Peter Morgan who also resurrected the racing career of Efflorescence's now much sought-after sire I Am Invincible.