Twelve months ago, Eduardo was like the new kid at school. Arriving on Pride's doorstep from Victoria, he was a Group 2 winner with patchy lead-up form and nobody quite knew where he fit. A couple of winter wins and a placing in The Shorts earned him a start in the 2020 The Everest (1200), but after setting a blistering speed he compounded to finish closer to last than first.

The jury was out on the horse.

Come the autumn, Eduardo had a point to prove and he did it in sensational style, kicking off with a victory over Nature Strip in the Challenge Stakes and trouncing his rivals in The Galaxy. That Galaxy win taught Pride a valuable lesson and he has used it to perfect Eduardo's 2021 Everest preparation.

"We've been able to give him the proper preparation to peak this time and the autumn really helped me with that," Pride said.

"Whereas before, I was feeling my way through it not really knowing what was required to get him to peak fitness. As much as you can look at a horse and say, 'I think it's ready to go today', having had the horse in a similar position before is your best guide." 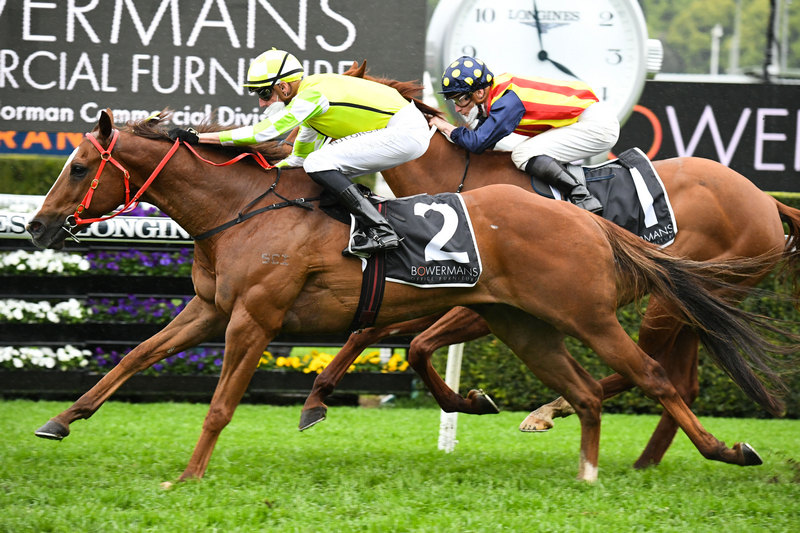 Eduardo and Nature Strip do battle again in The Everest, picture sportpix.com.au

As life's failures impart important lessons, a mistake Pride made in the autumn has likewise laid the seeds for future success. After winning The Galaxy, Eduardo and Nature Strip resumed their rivalry in the TJ Smith and this time, Nature Strip came out on top. But instead of walking away disappointed, Pride took a lot of positives from it.

"The first thing was the preparation was probably wrong. The TJ was, I won't say an afterthought because we had it in our mind to be there, but The Galaxy was always designed to be the peak run. I think anytime a horse puts in a peak run like he did in The Galaxy, you're entitled to a little dip and that's what we got from the horse."

Pride also learned the importance of letting Eduardo bowl along at his own rhythm. He says the gelding's biggest asset is his ability to sustain a high cruising speed and when that was negated in the TJ Smith, it didn't allow him to get his rivals out of their comfort zones.

"It just kept Nature Strip in the hunt and we got stalked and out-dashed, where the better way to ride this horse is to let him flow through the gallop," Pride said. "That doesn't mean he has to lead. But I think you're taking away his biggest weapon if you try to stack them up."

The scars of last year's Everest disaster are all but gone but there is still an undercurrent of unfinished business. While Eduardo has since proven himself among Australia's eminent sprinters, there are some who believe he is vulnerable over 1200 metres, especially at an expansive track like Randwick.

There are no such doubts in Pride's mind. He has absolute faith in the tough-as-nails gelding, and in the tweaks he has made to his training regime to have Eduardo at the peak of his powers for a second Everest bid on Saturday.

"I felt really let down last year in that he hadn't been represented properly, but his performances since then have put all that to bed," Pride said.

"I'm pretty philosophical about it. If it's our turn, it's our turn. We've done everything we can to make it our turn and the rest is out of our hands. He has had a beautiful, faultless preparation."