Vlad Duric is relieved Inferno is not clashing with the two other boom four-year-old's Mr Malek and Rocket Star this Saturday.

It will be his first time teaming up with last year’s juvenile champion, and a softer path to a flying start was obviously the preferred option.

“I feel Inferno is in the slightly weaker race, but he’s first-up and we still have to see how he progresses.” 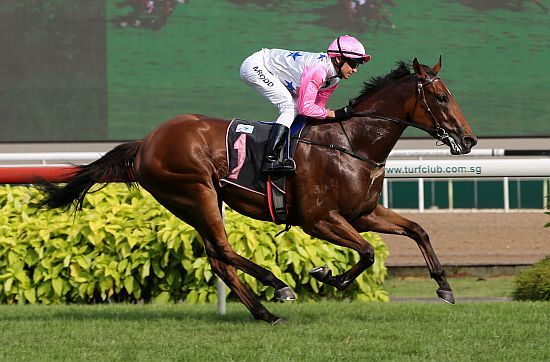 Michael Rodd formed a special bond with Inferno, but it's Vlad Duric who takes over from Saturday, picture Singapore Turf Club

Trainer Cliff Brown engaged Duric as Inferno’s jockey after regular partner Michael Rodd returned to Australia in April at the start of the three-month lockdown at Kranji.

Duric, who is well clear in his bid for a fourth consecutive Singapore champion jockey title, has been offered a plethora of such quality rides since racing resumed on July 11. Inferno is one he is most excited to begin an association with.

Undefeated at his first five starts, including wins in the Group 2 Aushorse Golden Horseshoe (1200m) and the Group 3 Saas Fee Stakes (1200m), Inferno was gradually filling the big shoes left by his illustrious stablemate Debt Collector, also prepared by Brown for the same owners, the Barree Stable, and now racing in Australia as Debt Agent.

He had his first taste of defeat in a Class 3 race over 1200m on February 29, but still ran a cracker to finish second to Siam Warrior.

After the long time to regroup – more than five months – Inferno has been turned out in impeccable order with Duric champing at the bit to test what is under the bonnet in real race conditions in Saturday’s $70,000 Class 3 Division 2 race over 1200m.

“I’ve actually ridden him in a couple of gallops before, when Michael was away in Australia,” said the Australian jockey.

“He’s had a really good prep. I rode him in a quiet trial (July 16) and in the second one (July 28), I gave him a squeeze up the straight in the last 200m, and he gave me a fantastic feeling.

“He’s furnished and matured and I’m really excited to ride him this Saturday.”

The other reason Duric was glad Inferno dodged the tougher first division race, was his own dodging of a happy problem - to choose between Inferno and Rocket Star, a horse he is also committed to.

The ballots have been kind to Duric. He also rides Rocket Star for Ricardo Le Grange in the $70,000 Class 3 Division 1 race over 1200m, a race billed as a mouth-watering clash with the Lee Freedman-trained Mr Malek. Inferno is contesting the Division 2 version three races earlier.

“The other Class 3 race is a great race, Mr Malek is a classy four-year-old, and there isn’t much between him and Rocket Star,” said Duric.

“Rocket Star, however, has the fitness edge over Mr Malek as he’s already won first-up. That could be the telling factor.”